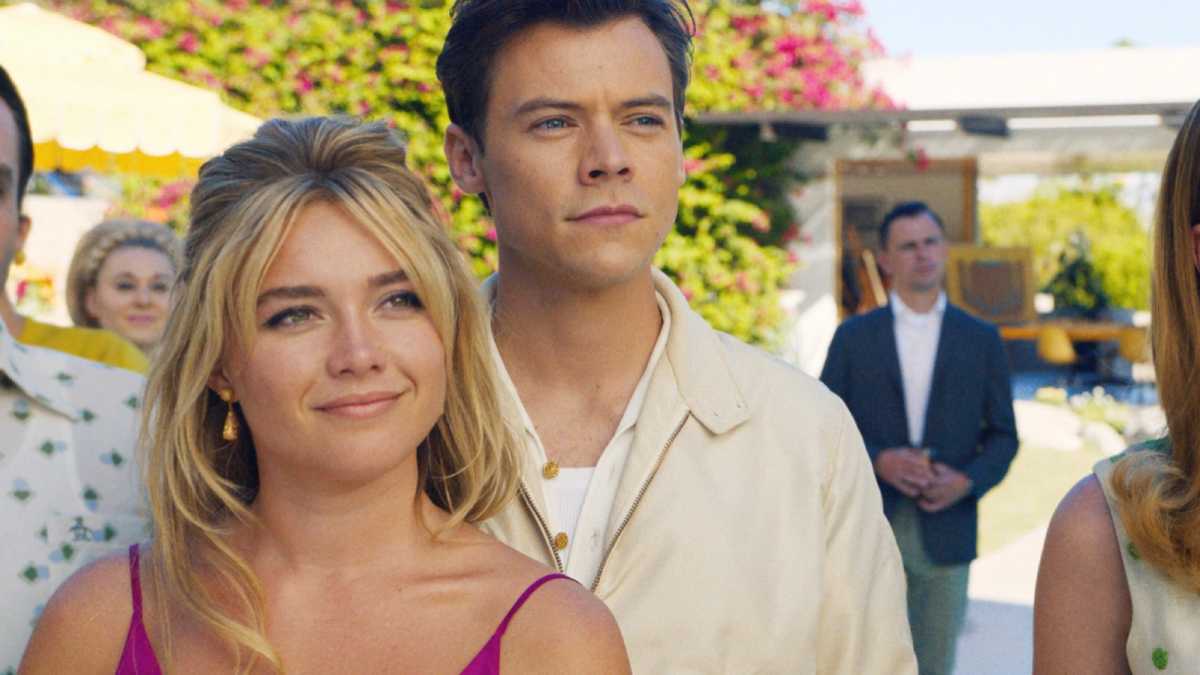 Courtesy of Warner Bros. Pictures
From left, Alice (Florence Pugh) and Jack (Harry Styles) are a happily married couple, until Alice begins to suspect that her picture-perfect life isn't quite as it seems.
By Sydney Brumfield — Senior Writer
Published: October 4, 2022

Imagine being promised the best ice cream flavor, but then getting to the ice cream parlor to find it’s sold out. This is what it’s like watching Olivia Wilde’s new film, “Don’t Worry Darling.” With an insane roster of actors, including the phenomenal Florence Pugh, Harry Styles, Chris Pine, Gemma Chan and Nick Kroll, as well as enough drama to set the internet ablaze, this film will ultimately leave viewers with a disappointed taste in their mouth.

“Don’t Worry Darling” follows Alice (Pugh) and Jack (Styles) as they enjoy their picture-perfect, 1950s-esque life in the community of Victory. Victory appears to be a newly developed community that houses the families of husbands who work for the Victory Project. Alice seems happy being a member of the cult of domesticity, but when her friend Margaret (KiKi Layne) starts to spiral into insanity as she questions what the Victory Project actually is, so does Alice. Alice must decide whether or not to keep with the status quo of Victory or push for the truth.

“Don’t Worry Darling” hinges so much of its success on Pugh’s talented shoulders, and it is not a jump to suggest that her on-screen talents saved this film. Pugh has already proved she is a remarkable force in the world of acting with her incredible performances in “Lady Macbeth” (2016), “Little Women” (2019) and, of course, the cult classic “Midsommar” (2019). In this film, Pugh not only demonstrates her innate ability as an actor, but shows that she can bring to life even the most lackluster material.

Unfortunately, the same cannot be said for Pugh’s co–stars. The problem was not any of their individual acting, but instead the fact that their characters are so horribly underdeveloped and haphazardly written that all of their performances feel like they are overacting. For example, Frank (Pine) had such potential to be an evil male-manipulator character. Instead, his little screen time is horribly used, feeling more like a one-dimensional villain from a children’s film than a legitimate threat. Similar things can be said for all the supporting roles. Their performances feel rigid and over-the-top, with all of the characters having such weak motivations. None of this is the fault of the performers, though, rather the fault of a script that feels rushed and poorly executed.

The first two acts of “Don’t Worry Darling” are horribly structured and lazily written. The entire premise of the film is that there is something askew in the community of Victory, but this is established so early on in the film that the pacing is thrown entirely off. The first and second acts feel like they are crawling toward the answer to the question “why can no one leave Victory?” Additionally, the stakes in the film are never escalated, thus leading to the film having an intense lack of agency. The film also has many narrative coincidences where plot points happen a bit too easily, breaking the world of the film because it is so unbelievable.

The cinematography of “Don’t Worry Darling” is one of its strong suits. Interesting framing and shots are used to try to build up Pugh’s descent into madness. Unfortunately, this easily gets pushed aside by the distracting editing. Shots used for montages and cutaways were used too frequently, leaving viewers bored of them. The viewing experience is also interrupted by some postproduction issues, especially when it came to audio quality.

“Don’t Worry Darling” is one of the most unsatisfactory films of the year, especially when the raw narrative and eventual third act twist truly had so much potential. This is made even more apparent after reading what the original screenplay ending was before Wilde bought and rewrote the material. In the end, this film feels more committed to being a feature film spectacle rather than being a successful and thrilling story.