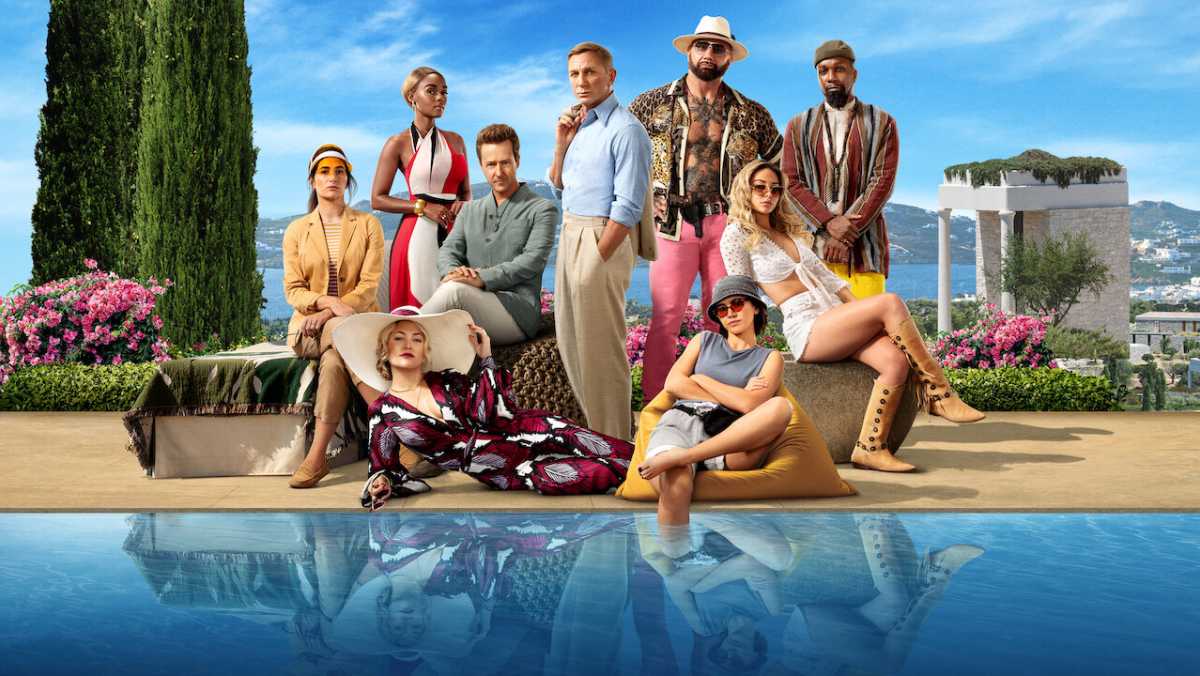 Courtesy of Netflix
While Benoit Blanc (Daniel Craig) returns for the "Knives Out" sequel, the rest of the cast are all new — and rise to the occasion.
By Patrick Mazzella — Staff Writer
Published: December 7, 2022

Glass Onion: A Knives Out Mystery

The newest “greatest detective in the world,” Benoit Blanc, is back for another subversive take on the traditional murder mystery.

Writer and director Rian Johnson follows up his mystery/comedy smash hit “Knives Out” (2019) with “Glass Onion: A Knives Out Mystery,” which follows Benoit Blanc (Daniel Craig) and an eclectic group of old friends who call themselves “The Disruptors.” Each member has become wildly successful on their own, but many reached their status thanks to genius billionaire Miles Bron (Edward Norton), who is the richest and most famous among them. When they receive a strange box inviting them to Bron’s private island, the guests all discover they are there to solve the mystery of his murder, a twist on a tradition of bringing his old friends together for one big weekend a year.

And to ease the minds of every fan patiently anticipating the release of this new entry in the beloved franchise, “Glass Onion” absolutely delivers. Being an anthology series (the only throughline of the two films being Detective Blanc), Johnson opened this world up to so many more possibilities and takes full advantage of this opportunity. Using the trust in his artistry given to him by Netflix after spending nearly half a billion on the rights, Johnson has crafted an even grander, twistier, funnier mystery than one can imagine. “Glass Onion” serves as yet another indictment of the culture of the rich and the conniving nature of those around them. Thankfully, it sets itself apart from the previous film, rarely falling into the same tropes and story beats, making for a refreshing take on the whodunit genre.

In a roundtable interview for The Hollywood Reporter, Johnson described the process of creating both “Glass Onion” and “Knives Out” as an exercise in understanding famed mystery writer Agatha Christie and her ability to create such brilliant mysteries. Johnson also wanted to make sure that the mysteries felt relevant to the present day. And boy, is he successful at both. Johnson, through both films with Detective Blanc, has captured the current landscape of the United States and the rich. Many mentions of how timely the ending and big reveal of the film feels have been thrown around online, and for good reason.

Blanc finds himself surrounded by countless archetypes seen before. There’s the frazzled but uptight politician (Kathryn Hahn), the misogynistic dude-bro streamer (Dave Bautista), the much too careless free spirit (Kate Hudson), the eclectic leader of the pack (Norton) and many others. All of the characters feel like caricatures of some real-life figure who will seemingly never leave anyone’s social media feed, no matter how hard one tries. But despite being caricatures, there is a complex web of relationships among The Disruptors. Each person has their own real and nuanced motivation, often beyond wanting more fame, more money and more power.

The entire ensemble is pitch perfect in their roles, each being allowed to go wild with their weird mannerisms and over-the-top performances. But they truly do fit into this world. Benoit Blanc and his ridiculous but oh-so perfect accent has really set the tone for the world this franchise inhabits and that makes it all the more entertaining. But Janelle Monáe is the real star of the show. Her turn as Andi Brand, former leader of the group, and Bron’s partner-turned-pariah among the friend group is spectacular. Her character stands out from the moment she steps on screen to the final shot, and she’s deserving of much more praise than can be put into words. The chemistry she and Craig have throughout their numerous scenes makes for such an entertaining watch.

Topicality and performances aside, Johnson’s plotting of the entire mystery is so well done. The pacing of the film takes a little while to get going, with a third of the 140-minute runtime going by without so much as a clue as to the true nature of the film, but soon enough it becomes a breakneck sprint to the end as each new detail of the killing is revealed to the audience.