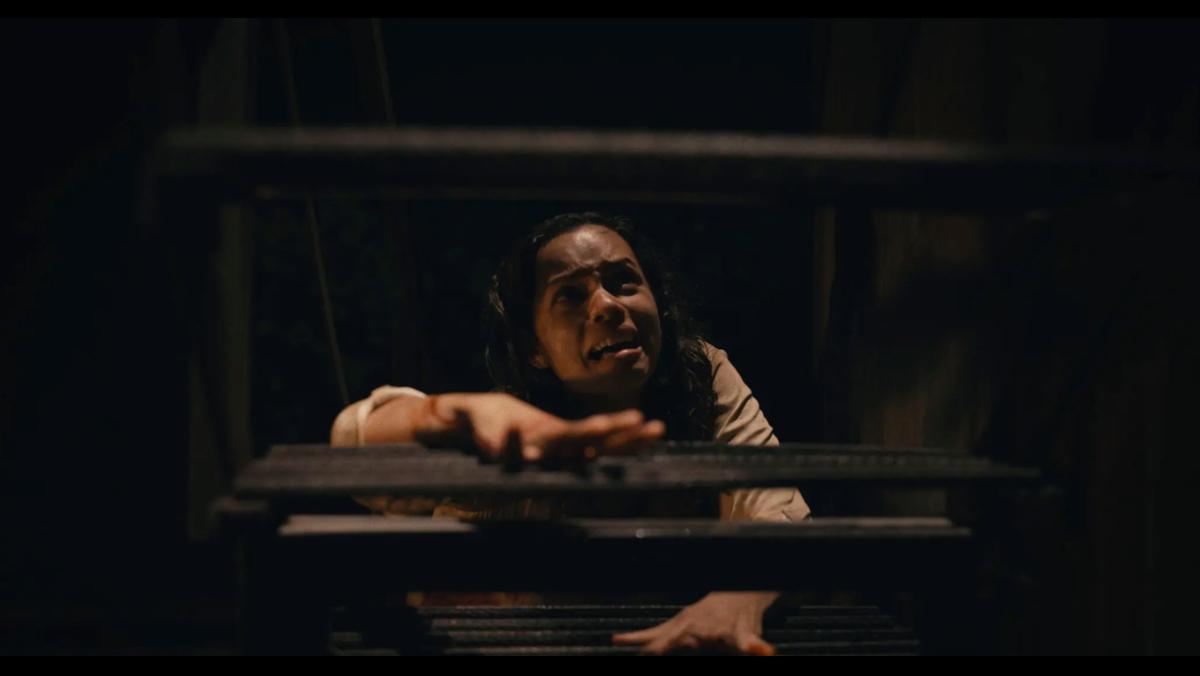 There have been few genuine cinematic surprises in the past year quite like “Barbarian.” Going in knowing as little as possible about this film is easily the best way to go about seeing it — this is a horror film unlike any other in recent years that demands to be seen.

“Barbarian” follows Tess (Georgina Campbell), a young woman who arrives at an Airbnb late at night in Detroit to discover that the home is already being rented by a man named Keith (Bill Skarsgård). With no other options, Tess decides to share the home with Keith after he extends the offer to her so they can figure out what went wrong together. She soon learns that there is much more to fear within the house upon the discovery of a hidden stairway in the basement that seems to go deep underground.

While most of the basic synopsis of this film may sound like a romantic comedy where two strangers who, because of peculiar circumstances, are forced to spend an evening together and then later fall in love, “Barbarian” is not even close to deserving of being categorized in this manner. It is a frighteningly original and disturbing horror film that truly must be seen to be believed.

“Barbarian”’s marketing campaign was refreshing in that it did not give a single aspect of the film away besides what is covered in its synopsis. There are so many shocking twists and turns throughout writer/director Zach Cregger’s masterful screenplay that it would be a crime to say anything about “Barbarian” that is not already featured in its trailer.

Cregger constantly keeps the information about what is really going on in the film at arm’s length from the viewer, successfully keeping them at the edge of their seat, eager to understand what is really happening. As the film seems to constantly reinvent itself throughout its three acts, the viewer learns one bit of significant information each time. By the end of the film, audiences are able to put all of the pieces together in a way that is not simply handed to them. The manner in which Cregger goes about plotting and arranging the film feels inspired and fresh.

It cannot be understated how truly brilliant Cregger’s direction of this film is. He consistently builds suspense and tension with such ease throughout the entirety of “Barbarian” that once it ends, the viewer is left in a perpetual state of unease and fear regarding what they have witnessed on screen.

Tess is very much the viewer’s guide through the winding and seemingly never-ending hellscape that Cregger creates through his smart and twisted original work. Campbell effectively portrays Tess’ intelligence and fearlessness through her terrific performance, helping make her a character that is easy for the audience to root for.

Skarsgård is equally fantastic in his suspicious role. The actor who has made a name for himself in projects like “IT” and “Castle Rock,” in which he has expertly portrayed frighteningly unsettling roles, is very mysterious here. He does an amazing job of keeping his character’s role in the plot hidden as the viewer constantly questions what his true intentions are and if he is who he says he is to Tess.

Justin Long plays a supporting role in “Barbarian” as AJ, a character that is refreshingly unlike many of the types of dorky characters he has played in past projects throughout his career. Long provides plenty of comedic relief through his self-centered, unlikable and often idiotic character. AJ adds a very interesting element of social commentary to “Barbarian,” which is fairly layered, yet not the main focus of the film. “Barbarian” is not quite as deep or thematically complex as a film like “Nope,” but it does have something to say specifically about gender politics. This element adds some unexpected depth and is all the more impactful when seen in the film.

The film also features an intense score composed by Anna Drubich and claustrophobic cinematography by director of photography Zach Kuperstein that, when paired together, heightens the suspense in several key moments.

“Barbarian” is the film in 2022 that fans of the horror genre have been waiting for. It is a uniquely terrifying thrill ride that will leave viewers breathless. With their jaws on the floor, audiences leave eager to experience it all over again.