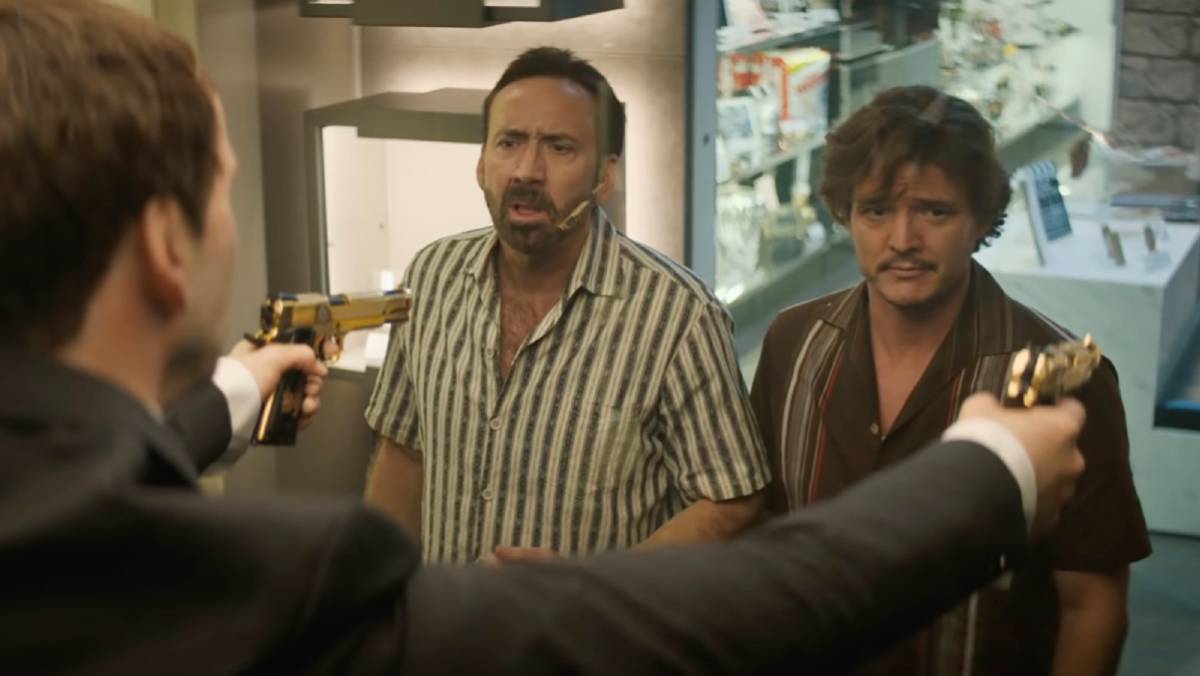 Guns, car chases, cliff jumping, the CIA, Nicolas Cage and … Pedro Pascal? “The Unbearable Weight of Massive Talent,” written and directed by Tom Gormican, follows Cage and Pascal as they join forces on the big screen, creating a fun take on the buddy film trope.

“The Unbearable Weight of Massive Talent” follows Cage playing, well, himself, as he is unable to find his next big break. After another tough rejection from the role of a lifetime, Cage gets an offer to attend Javi Gutierrez’s (Pascal) birthday party for $1 million. For Javi, a massive fan of Cage, having him attend his party and read his script is the opportunity of a lifetime and a chance to live out his lifelong dream of getting to know Nicolas Cage. What neither of the two predict is that this trip may just turn them into the best of friends.

This film relies heavily on the talent involved in it, specifically Pascal as he carries every scene he is in. Had this project been done with lesser actors it would have been a colossal waste of time. But Pascal is brilliant. Legitimately, all the funny moments are the result of Pascal’s perfect comedy chops. His comedic timing is superb. Pascal brought depth and complexity to a character that could have been completely one-dimensional. Pascal masters both the delivery of humorous dialogue as well as the slapstick elements of the film. His performance cemented Pascal as an actor who really can do it all.

Cage does a solid job as well. Unfortunately, the character is written in a way that gets old after a while. Cage — the character — is obnoxious, narcissistic and very flat. Cage is the center of conflict for most of the film, his own actions serving heavily as the propelling force behind the plot, but this grows tiresome to watch. There is a brief moment at the end of the film where Cage shines through in a touching scene with his on-screen daughter. It is disappointing that this did not occur more frequently, as Cage was typically the punchline of jokes rather than the one delivering them.

The rest of the film’s elements are fine, but not much to write home about. The first act is a little slow to get into; its comedy involves a great deal of set up. There are certain running gags that are overdone in the film — like a CGI younger Nic Cage who exists in the imagination of the older Nic Cage — who serves as a meta internal instigator for Cage to continue to chase roles and attempt to be the best. CGI Nick Cage does this by screaming, slapping and bullying real Cage which is funny the first couple of times but is heavily overdone.

The female characters are pathetic. They lack goals, agency and complexities. The women exist solely to propel the plot forward and act as objects to the leading men. While this is disappointing it is not exactly shocking.

Nicolas Cage and Pedro Pascal deliver a solid comedy that successfully creates a refreshing take on the buddy film trope.Though it has its annoying shortcomings, if viewers are looking for a fun, crowd-pleasing movie, “The Unbearable Weight of Massive Talent” is just the one to go see. Even if it is just so they can admire the unbearable weight of Pedro Pascal’s massive talent.