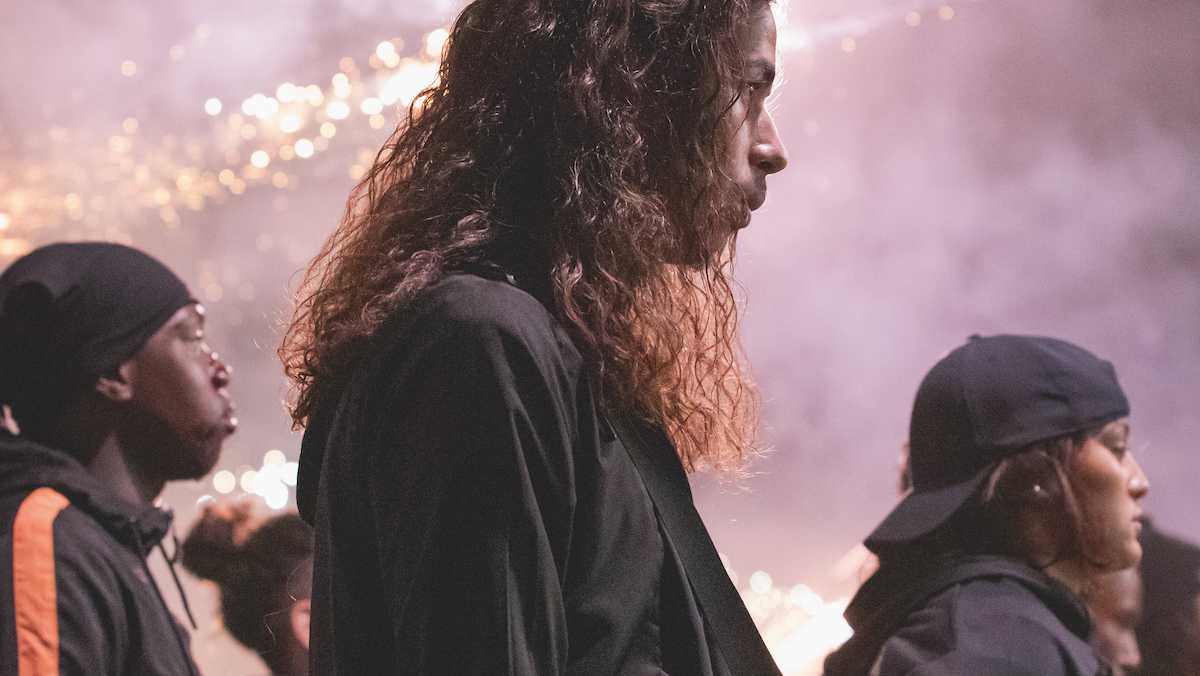 Courtesy of Netflix
After the death of his youngest brother, Karim (Sami Slimane) finds himself at odds with his older siblings on how to move on.
By Matt Minton — Co Life and Culture Editor
Published: October 5, 2022

Any of the criticisms that can be levied at Romain Gavras’ relentless French-language film “Athena” do not apply to its exhilarating opening sequence. With an intense, unbroken 11-minute take that masterfully moves between multiple different characters and locations, Gavras places the audience right into the world of the film as protestors organize the initiating attack against the French government. The amount of coordination and planning that this scene must have taken is difficult to even imagine, and the results pay off, perfectly establishing the uncompromisingly bleak tone of the film.

Set in present day, the film follows the residents of a French neighborhood named Athena mere hours after Idir (Mohamed Amri) is presumably found dead by the police. His three older siblings find themselves at the heart of a conflict that erupts between the citizens of Athena and the police. Violence and chaos fill nearly every frame of this film as Karim (Sami Slimane) finds himself at odds with his brother Abdel (Dali Benssalah), both disagreeing on how to move forward in the wake of Idir’s death. After a police officer (Anthony Bajon) is taken hostage, the conflict between not only the brothers but all of the protestors becomes exacerbated.

Even though Netflix seems to have quietly dropped this movie on their streaming platform with little to no advertising, the visual storytelling present in “Athena” demands the viewer’s attention throughout. Gavras is known for his excellent work directing music videos, primarily “Bad Girls” by M.I.A. and “No Church in the Wild” by Kanye West, and his knack for beautiful shot composition is ever present in his film.

While there are many stunning riot sequences that are breathtaking to watch, effectively placing the viewer right in the middle of the action, oftentimes the most powerful moments in this film are the ones where Gavras allows the camera to linger on characters in vulnerable moments. For instance, in an early scene, viewers simply watch Karim look at a picture of his brother. While no dialogue is utilized, the scene is emotional and resonates, giving the audience all the information they need to know about how Karim is processing his younger brother’s death. Unfortunately, this is one of many instances in “Athena” where crucial breathing moments in the script are abruptly interrupted to return to the action at hand.

To say the pacing and narrative structure of “Athena” are clunky and messy would be an understatement. The film feels more like a collection of compelling moments that don’t mesh to create one strong narrative. By choosing to depict nonstop action throughout almost the entire 99-minute runtime, Gavras sacrifices the nuances and depth of his characters. For instance, the conflict between Karim and Abdel is not nearly as fleshed out as it could be, beyond one argument that catches the viewer’s attention; instead, the film chooses to write one-note characters that lack complete character arcs.

Furthermore, while the film attempts to provide commentary on police brutality and how protests and movements spread across a country, especially in the wake of social media, these endeavors prove to be mostly futile by its conclusion. The inclusion of the police officer that gets kidnapped is one opportunity where the film’s script could’ve expanded upon the themes of the film by showing interactions between the officer and the protestors, depicting the problematic principles that the police follow. The film is too focused on being a visual spectacle to follow through with the narrative threads that are set up, failing to give the political themes the weight they deserve. At times, it feels like Gavras has chosen to shoot action scenes simply to flex his skills rather than tell a story. By the time it reaches its weak conclusion, the script adds a dangerous twist that sadly undermines the anger that the protestors feel toward police and governmental institutions throughout the film.

As much potential as there is in the ideas brimming at the surface of “Athena,” it ultimately falls victim to being style over substance. If as much effort and precision had been given to the characters and the story as there was to the visual language of the film, Gavras could have crafted a masterpiece.