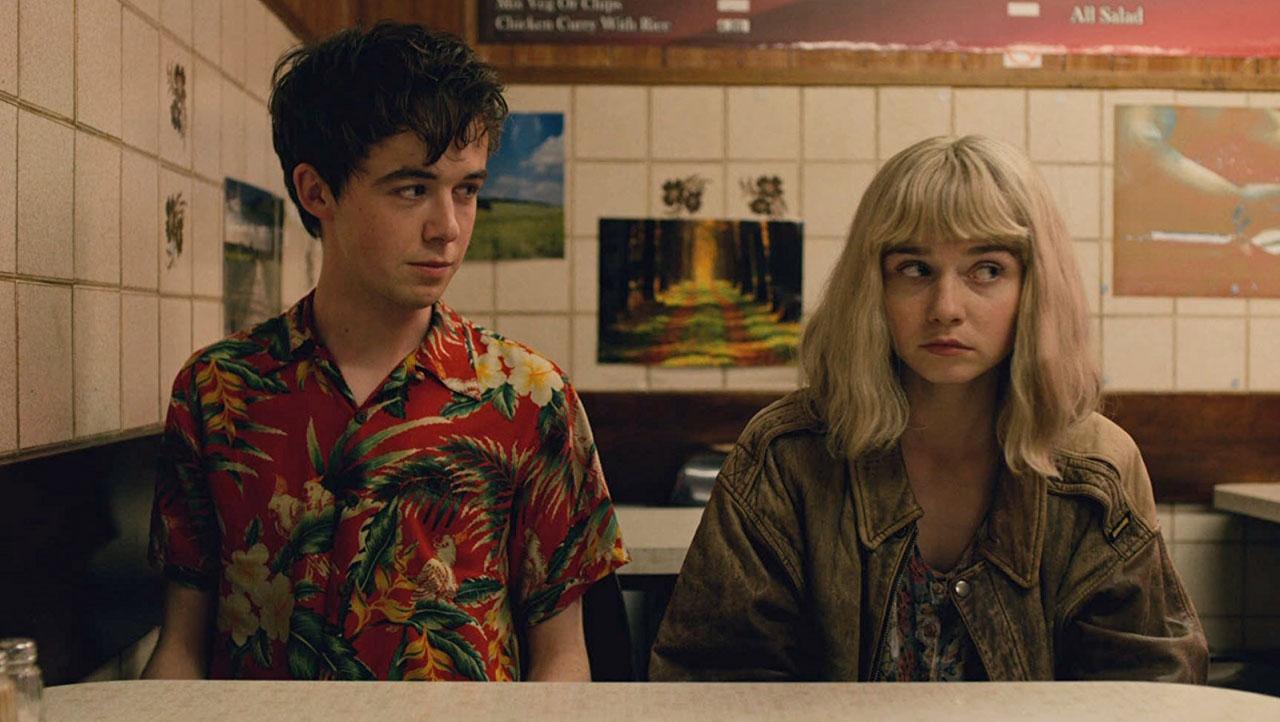 The End of the F***ing World

James (Alex Lawther) is pretty sure he’s a psychopath. He wants to commit a murder. Alyssa (Jessica Barden) is angry, repulsed by normalcy, cliche and other people. She wants companionship. James would be the perfect weirdo boyfriend. Alyssa would be the perfect victim.

“The End of the F***ing World” is a remake of the 2014 TV movie “TEOTFW,” which was based on a graphic novel of the same name by Charles Forsman. The series is composed of eight bite-sized, 20-minute episodes that follow the budding romance between James and Alyssa. They steal cars, rob stores and murder a stranger. Throughout the rest of the show, the quirky couple attempts to outrun the cops and track down Alyssa’s estranged father, Leslie (Barry Ward).

“The End of the F***ing World” is a road trip story, an adolescent “Odyssey” replete with strange side characters and oddball hijinks that, while outlandish, reinforce James and Alyssa’s bond. The two become closer by skirting disaster after disaster. At first, they gleefully fight their way through creepy strangers and crazed store clerks. It’s a romp through rural England.

Then, the show shifts.

A catastrophic event in the third episode redefines James’ and Alyssa’s relationship with each other and with the wider world. Instead of an absurd romantic comedy, “The End of the F***ing World” becomes a sincere, dramatic and occasionally soul–crushing story of escape. Part police drama, part “Romeo and Juliet,” “The End of the F***ing World” is a tale riddled with uncertainty and anxiety while maintaining the innocence of its protagonists.

It’s difficult to evoke sympathy for an objectively bad person. Yes, James suffered an emotional trauma at a young age. Yes, he is a confused, love-crazed adolescent. However, at the end of the day, he spends his free time carving up cats in his backyard to prepare himself for murder. The first few episodes make it clear that James intended to murder Alyssa. He frequently fantasizes about stabbing her and leaving her for dead. Showrunner Jonathan Entwistle doesn’t let the audience forget about the consequences and complexities of James’s actions and instead casts James in shades of gray. By the end of the final episode, viewers are left to decide whether James is a hero, a delinquent or a dangerous, despicable monster.

This ambiguity is the show’s most compelling component; it separates “The End of the F***ing World” from other, tamer stories of rebellious young love. No matter how reprehensible James may seem, in the final moments, viewers will root for James and Alyssa.

On the periphery of the main plot thread are several surprisingly grim side stories that detail the impact of James and Alyssa’s cross–country jaunt. The mother of the man the couple murdered struggles with her son’s death (and his evil deeds that come to life postmortem). James’s father Phil (Steve Oram) tries to understand his son’s motives and fears for his safety. Alyssa’s mother Gwen (Christine Bottomley) worries about her daughter and collapses under the oppressive abuse of her husband. Most compellingly, two police officers, Eunice (Gemma Whelan) and Teri (Wunmi Mosaku), chase after the kids while smoothing out their own complicated sexual history.

The two officers represent the mixed morality the show depicts. Eunice assumes the best and believes that James and Alyssa are foolish kids who are in over their heads, while Teri sees two criminals with a violent streak. Neither is correct, and Entwistle uses their conversations to reinforce the idea that James and Alyssa are not good people. It’s a bold move that damns the actions of the protagonists and elevates them to a level of genuine humanity — people, as writers often forget, are never purely good or purely evil.

The premise of the show is “Moonrise Kingdom” with a serial killer bent, and how well that fusion works depends on how willing you are to accept an aspiring murderer as a protagonist. “The End of the F***ing World” plays tricks on the viewer. At first, Entwistle presents it as an absurdist romantic comedy, but eventually he reveals a darker, sweeter story — a story about two weirdos finding each other, falling for each other and failing each other.