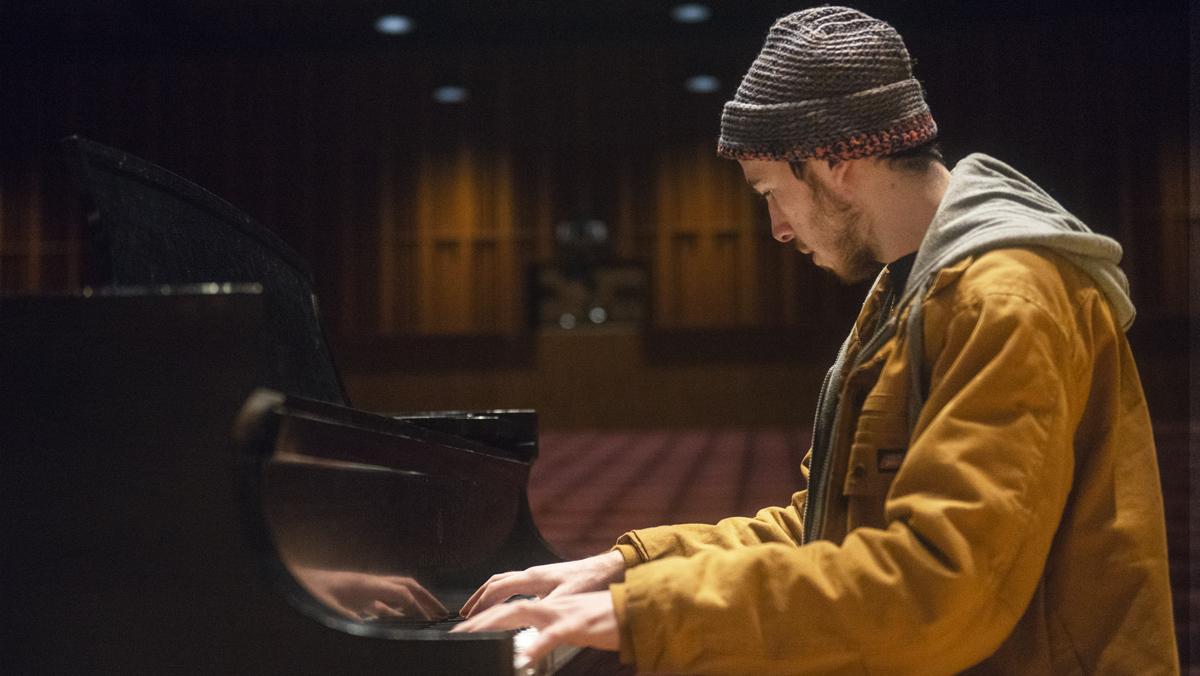 Sam Fuller/The Ithacan
Senior Jonah Bobo worked with a friend from his hometown, playwright Chloe Hayat, to create an original musical, “The Star of Lennox.” The story is inspired by historical events and is set to premeire in May 2019.
By Matilde Bechet
Published: February 27, 2019

Though a musical seems grandiose and monumental under the pageantry of performance and bright stage lights, every production begins with just an idea. For senior Jonah Bobo, the idea for him to write his own musical came nearly three years ago. This semester, he is finally bringing it to fruition.

A memoir about a French composer that chronicles his obsession for a famous actress inspired Bobo to ask his friend and professional playwright Chloé Hayat about writing an original musical that would be titled “Star of Lennox.”

“Star of Lennox” examines the role of women in Western society through the lens of a cabaret singer who gets caught up in a love affair with an aspiring composer. The story evolves when the cabaret singer, who goes by the name Star of Lennox, discovers her lover’s true identity. “Star of Lennox” is set to premiere May 6 in the Richard M. Clark Theater at the Dillingham Center.

Bobo, a composition major, said he was not familiar with the writing process for a musical, so he decided to reach out to Hayat. Hayat said the idea of the memoir grabbed her attention. Despite never having written a musical, she decided to take on the challenge.

Hayat, a playwright and graduate from SUNY Purchase, grew up in Roosevelt Island, New York, a few houses down from Bobo, her brother’s friend. Hayat said that at first, she was hesitant to accept Bobo’s offer to write this musical.

“I didn’t know him that well and so I was like, ‘Um, maybe,’ and then we hung out, like, for literally like four hours and came up with this idea on the spot,” Hayat said. “Immediately, we were totally excited and on the same page about it, and we pretty much [have] been just thrilled about it this whole time, so it was an immediate connection.”

Although Bobo approached Hayat with the idea of writing a musical based on the composer’s memoir, the history of their hometown also became a source of inspiration that then drove the plot.

“It’s a really interesting place,” Hayat said. “So much of this place is about the history of women and mental health and how women are treated, and Roosevelt Island is famous for being the site of the asylum that the first female investigative journalist, Nellie Bly, did her first investigative piece.”

Hayat said she hopes the audience will ponder over the issues addressed throughout the musical by stepping away from negative societal attitudes associated with domestic abuse victims.

“What’s really important to me about this story is that it talks about abusive relationships in a way that I feel is more authentic to like a young woman’s experience,” Hayat said.

Hayat said she hopes the musical will communicate to audience members that survivors of domestic abuse should be believed and supported.

“When a woman is telling you something about the trauma she’s experienced, it’s valid and it’s worthy of discussion,” Hayat said. “Everyone needs help every now and then, and that it doesn’t make you a weaker person and being strong doesn’t mean taking on abuse just because you feel like you can handle it — like no one should handle it, you know?”

Although Bobo focused on composing the musical score, and Hayat focused on writing the script, the two still worked on song lyrics together.

“It’s like a book and then a score, so I wrote the score, all of the music and the orchestrations, and we worked on lyrics,” Bobo said. “We kind of collaborated on the lyrics because she would sometimes write a monologue for a scene where a song was supposed to go, and then I would take that and turn in into lyrics for the characters to sing.”

Despite residing in different cities throughout the year, Hayat and Bobo maintained a collaborative and committed relationship while working on the songs for this musical.

One of Hayat’s favorite memories of working on “The Star of Lennox” was writing songs with Bobo, she said. While Hayat was working at a theater company in Times Square, Bobo paid her a visit. The two sat at a piano for almost an hour and worked on a song that would become one of her favorites in the musical.

The play revolves around four characters and will, therefore, include four cast members. Although the cast has yet to be publicly announced, Hayat said she is confident in Bobo’s choices.

Writing and producing a musical is already a strenuous task for an experienced professional whose sole job is to focus on this field. Bobo is still a student at college who is working to complete not only his studies but also the musical.

Walter Chon, assistant professor in the Department of Theatre Arts, said that producing an original play as a student results in personal growth as an artist.

“I think that they grow immensely,” Chon said. “I mean with any project, whether they’re writing the music, the book, the libretto and/or writing it or producing it. … The best way to grow as an artist is by really trying it on and really writing, putting it on stage, sharing it with the public.”

Bobo said he was excited to produce original content, especially because he thinks musicals today are lacking creativity. The reason Bobo embarked on this career was so he could create imaginative work like “The Star of Lennox.”

“Every new musical that … is coming out is an adaptation of a movie that’s kind of recent,” Bobo said. “I feel like new plays are really staying on the cutting edge of being inventive and bringing new ideas onto the stage, and musicals should be doing that too.”