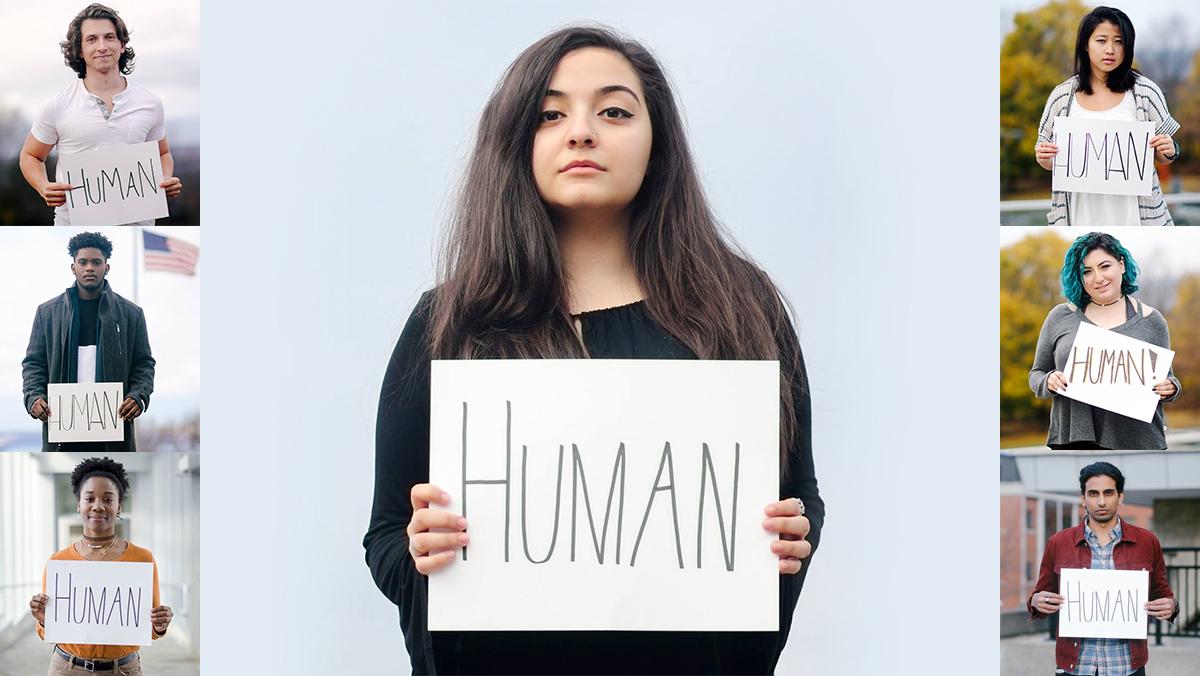 Courtesy of Elena Haskins and Mori Peri
Ithaca College students stand in different locations around the campus for the #takeitback campaign. Attached to each photo on Facebook is a written post in which the subject explains their struggles with labels. Awwad has compiled over 35 images of students and the collection is still growing.
By Kate Nalepinski — Life & Culture Editor
Published: February 1, 2017

“Being Middle Eastern … comes with a truck load of negativity,” sophomore Alisar Awwad stated on Nov. 20 in a Facebook post representing her photography campaign, #takeitback. “Whether it’s being labelled a terrorist, an oppressed woman, or genie in a bottle that can fulfill your sexual fantasies, it never reflects who I am. I am Alisar, I am Middle Eastern, and I am Human. #takeitback.”

Whether intentionally harmful or not, these remarks were made by numerous people Awwad interacted with when she moved to the United States from India, her birthplace, two years ago.

Awwad began thinking of ways she could channel her frustration with identity into art. Awwad created the #takeitback Project in an effort to “take back” her own identity and empathize with others who also struggle against labels and prejudices.

“I wanted to create an environment where we can look beyond the labels and stop judging each other,” she said.

Awwad, whose father is Syrian and mother is Persian, said her identity was always a fragile part of her life. She never went to either of her parents’ home countries. She grew more confused when she attended the British School, an English private school in New Delhi. She said the combinations of labels and nicknames, along with her mixed family background, overwhelmed her.

“I didn’t know who I was anymore,” she said. “People had decided who I was without my permission. I couldn’t identify myself.”

When Awwad reached her breaking point, an idea came to her: a photo project emphasizing identity. Awwad said the results of the 2016 election, along with language that President Donald Trump has used to describe minorities, worked as the final motivator for the start of her project.

“After the U.S. election, everything was really divided,” Awwad said. “We needed to, as a community, come together. This was my method of taking baby steps into uniting us.”

Less than a month after the election, with the assistance from junior Elena Haskins and sophomore Mauricio Peri, Awwad began posting to Facebook photos of fellow Ithaca College students holding signs that read “HUMAN.” Accompanying the photos are captions that students wrote explaining their difficulties with identity and judgment.

“I know what it’s like to come from a place where you’re misunderstood,” she said. “I need to use my privilege to give people a space where they can express themselves.”  –Alisar Awwad

Awwad has since posted over 35 photos of students of different cultures explaining their stories and experiences, including herself. Awwad said that because the Facebook album was public, she anticipated more internet trolls, as opposed to the positive feedback she received.

Senior Sarah Chaneles was immediately drawn to Awwad’s project when she saw it on her Facebook feed. After Awwad reached out to her individually, Chaneles said, she couldn’t wait to get involved.

Chaneles said her Facebook post for the campaign opened up a conversation with her mother about how she’s treated in the patriarchal society, something Chaneles touched on in her piece.

Haskins, the photographer for some of the campaign photos, said she was intrigued by the project because it allowed people to pick the identity they wanted to share. Haskins also participated in the campaign by discussing her experiences as an Asian American.

“We are so used to labelling others and ourselves that sometimes we forget who we are,” Haskins stated on the Facebook image of herself posted Nov. 20. “We forget to shed all the labels society has attached to our personas; we don’t realize that we are all human. It’s time we take back our identity and see people for who they are.”

Haskins said the project allowed her to share something personal with everyone, provided it would motivate others to share their stories with the campaign.

“Oftentimes, we are mislabeled or forced to confront an identity that we don’t resonate with,” Haskins said. “This let people take charge of themselves.”

Chaneles said the #takeitback campaign shows off how millennials utilize social media to advance community relationships and open up dialogues.

“Millennials get a bad rep for using social media sometimes,” she said. “But it can be used as an important tool for making people come together. … Anything like that gets attention, and once a bunch of people start talking about the things they’re not supposed to talk about, it makes people want to talk about it, too.”

Awwad said students have reached out to her, thanking her about their involvement in her campaign. The most influential response, she said, came from a student whose father apologized for judging the student as a member of the LGBTQ community.

“For me, that’s more than I ever expected,” she said.

Awwad said she has no intention of stopping the process, and she said she will continue for as long as she can.

“I’m not doing this for credit or anything — this is just for the fact that we should respect … people,” she said. “These people are my inspirations. These people who sit next to you, they’re just like me and you.”