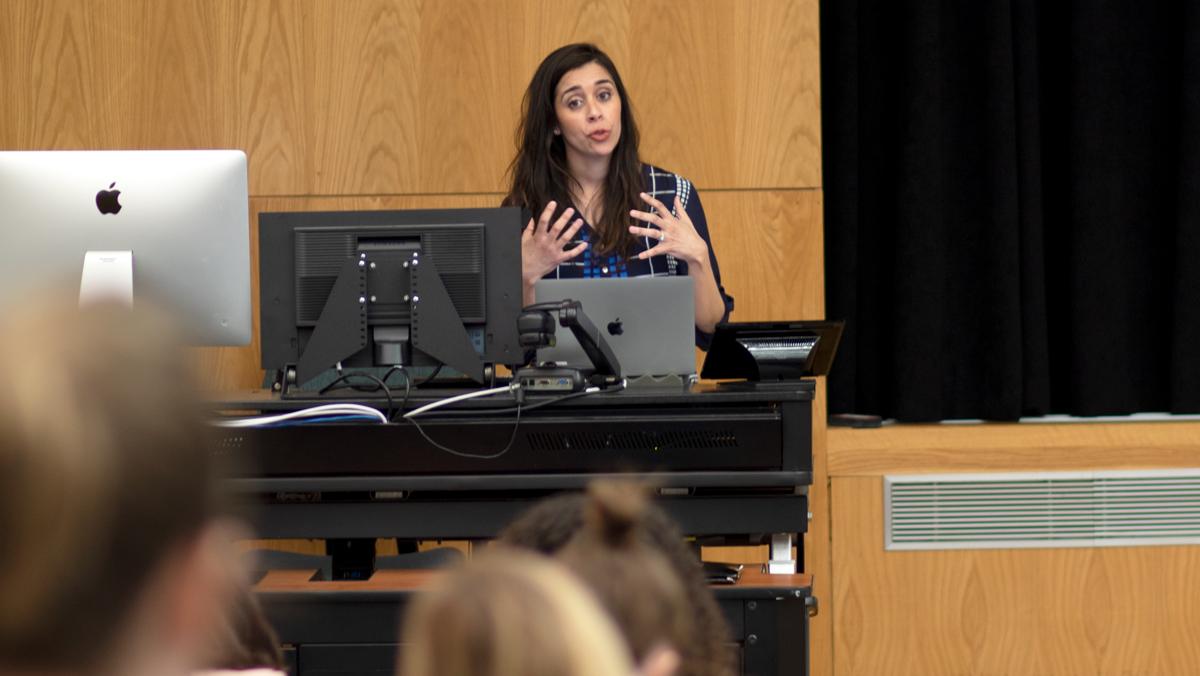 The Ithaca College Roy H. Park School of Communications wrapped up a series of programs for Women in Media Month, held in conjunction with Women’s History Month, with an event March 31 that featured a panel to discuss the challenge of dual identity that is faced in the Latin American community and a showing of a short documentary about a Puerto Rican youth.

This is the third annual Women in Media Month that the college and the Park School hosted.

The panel, held in the Park Auditorium, featured a brief presentation from Rocío Núñez Shea, instructor in the Department of Journalism, on how immigration issues in the United States affect children and teenagers in the Latin American community. After Shea’s presentation, Lisbeth Perez ’17 screened her short documentary, “Mi Isla,” a story that focuses on the life of a Puerto Rican teenager whose family sends him to the Bronx during the aftermath of Hurricane Maria.

Hurricane Maria was a Category 4 storm that wreaked havoc in Puerto Rico in 2017. The damage was extensive, with 96 percent of residents claiming they were still without power seven months after the storm ended. A Harvard University study published May 29, 2017, estimated that the storm had a death toll of approximately 4,600 people. Because of the destruction the storm caused, it became common for parents to send their children away so they might have a better living situation while the country recovered.

Perez worked on her film while she was going to school to get her master’s degree in journalism at Columbia University in New York City. As part of her documentary specialization in the program, she co-produced, shot and edited “Mi Isla” in three months.

Perez said the most challenging — yet rewarding — part of taking on this documentary was working with and getting to know the teenager that the documentary was focused on.

“When we found out that he was leaving, we were able to get a hold of his mom in Puerto Rico, and she gave us permission to film, so we had three days to film his entire life in New York,” Perez said. “We just decided to get involved and take that opportunity because the main goal was to tell someone’s story, and his story was one we wanted to tell.”

“I’m from a family of immigrants myself,” Shea said. “My father came as a boy to the U.S. from the Dominican Republic, and he had a very different experience leaving his home country than my mother did, who came sort of on her own will as a woman, also from the Dominican Republic. I was really struck by his experience of facing this neither American nor Dominican identity and what that meant for him, and hearing about Perez’s documentary screening inspired me to share my story.”

Rada, who organized the event, said that having events like the Women Making Media panel is important for the college community because it allows others to have the opportunity to gain new perspectives about different topics.

“Events like these are more important for us at IC because it reflects our student body, our geographic community, our nation and what’s going on the world around us,” Rada said. “That is what college, and education in general, is all about.”

Junior journalism student Alexzandria Sanchez said she was grateful to attend the Women Making Media panel because she felt it was able to emphasize how people in marginalized communities can succeed in white-dominated industries.

“I’m Puerto Rican, so having an opportunity to be in the audience and see it for  myself was eye-opening,” Sanchez said. “This event was something that I definitely needed.”