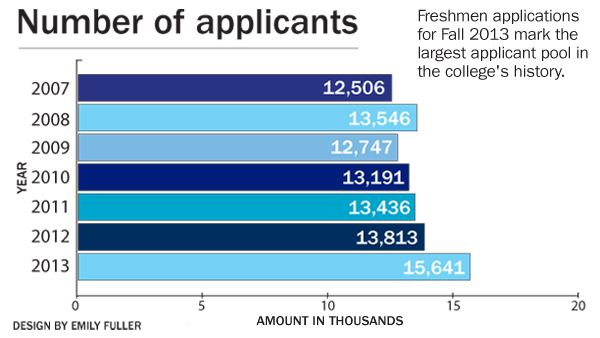 Ithaca College has announced a 13 percent increase in freshmen applications for Fall 2013, compared to last year. The college received 15,641 applications for next year, the largest applicant pool in the college’s history.

Maguire said the increase in applications for next year can be attributed to several factors, including the Integrative Core Curriculum that is part of the college’s IC 20/20 strategic plan.

“We can’t say we know that for sure right now…[but] I don’t think [the increase] would have happened if people weren’t responsive or receptive to the Integrative Core Curriculum, because that was a significant portion of our message this fall to students in our presentations to them, in our open houses that we provided, as well as some of our publications,” Maguire said.

This year’s applicants are also the first group to have the option of withholding SAT or ACT scores since the college announced the decision in May 2012. In an Intercom announcement, Maguire said this factor may have attracted more applicants.

Twenty-four percent of applicants chose to withhold standardized test scores. However, Maguire said this did not affect the quality of the pool of applicants, because other factors, such as class rank and GPA, were also taken into consideration.

Maguire also said the increased number of applications will not affect the number of people accepted. However, he said the college does plan to accept more students for different reasons.

Over the past few years, the college has admitted around 9,000 students each year. Maguire said he expects this number to increase to about 10,000 this year, with an estimated enrollment of about 1,700. College officials will finish decisions, finalize a wait-list and send out denial letters this week.

Maguire also said they hope to investigate further to determine the contributing factors over the summer.

Laura Young, who is from Souderton, Pa., was accepted to the college’s Environmental Sciences program for Fall 2013. She said the school’s sustainability efforts played a role in her decision to apply.

“A lot of my friends were looking at [the school] and … they came back and told me that it was the perfect school for me,” she said.

Freshman Hannah Sellers is an Integrated Marketing Communications major from Chagrin Falls, Ohio. Sellers was accepted to six colleges last year, including Ithaca College. She said her tour of the college helped her get a sense of the environment and the City of Ithaca.

“It was one of the only liberal arts colleges that I felt was not too small to be suppressive and not too big to be overwhelming, and [it] had schools of varying disciplines with equal strength,” Sellers said.

Sellers said she chose the college because of her financial aid package and the Roy H. Park School of Communications.

Freshman Kali Campbell, an occupational therapy major, is from San Antonio. She said the geography of the college and the OT program were her reasons for choosing the college.

Freshman Dhruv Padmakumar, a sport management major, is from Bangalore, India. He said he applied to the college after a university fair at his high school in India.

“It was the first school to have come to our school that offered sport management,” he said. “So that itself was a big plus side.”

Rowland King, vice president for public affairs at the National Association of Independent Colleges and Universities, said institutions that are of the same size as Ithaca College tend to face problems meeting enrollment targets. NAICU consists of about 1,000 private colleges and universities of all sizes, including Ithaca College.

“There has really been a great variation in freshman applications over the past few years, since the economic downturn,” King said. “I would say the most difficult group of institutions are those that are in the mid-range that are maybe a few thousand to five or six thousand. These places have been stressed. So I would say that if the numbers are up, that’s a really positive sign for this fall and positions the institution pretty well going into the fall.”