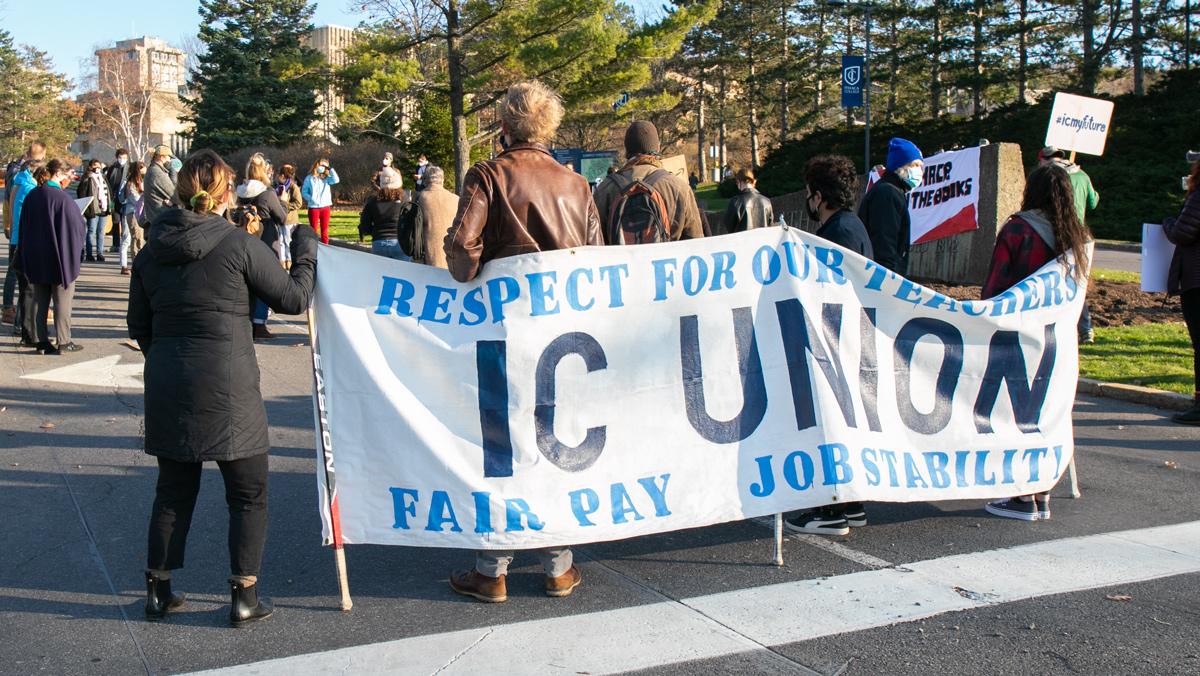 Ash Bailot/The Ithacan
The Contingent Faculty Union urged the college’s administration to be creative in its attempts to save money amid the COVID-19 pandemic and to support contingent faculty members, who are most at risk of being laid off.
By Madison Fernandez — Editor in Chief
Published: February 19, 2021

The American Arbitration Association (AAA) has ruled against the Ithaca College administration in a case involving the college’s action against a contingent faculty member.

The AAA ruled this week that Tom Schneller, assistant professor in the Department of Music Theory, History and Composition, did not violate the union’s Collective Bargaining Agreement (CBA), as the college claimed. In May, Schneller posted an open letter to Intercom on behalf of the union, titled “Solidarity in a Time of Crisis: A Plea from Your Contingent Colleagues.” The letter urged the college’s administration to be creative in its attempts to save money amid the COVID-19 pandemic and to support contingent faculty members, who are most at risk of being laid off.

This letter was posted before La Jerne Cornish, provost and senior vice president for academic affairs, announced the Academic Program Prioritization (APP) plans to the Faculty Council in October.

The union letter asked for tenured, tenure-track and non-tenure-eligible notice (NTEN) colleagues to “consider refusing summer overload credits” and to pressure department chairs “to privilege the most vulnerable faculty for these overages so that those who find themselves jobless in the fall might have a final few paychecks before being laid off in August.”

Dave Maley, director of public relations, said that there was a reduction of 34 full-time equivalent (FTE) positions among the contingent faculty from Fall 2019 to Fall 2020. He said some of this was a result of a drop in enrollment, the closing of the Los Angeles program for Fall 2020, the pause on faculty sabbaticals and Center for Faculty Research and Development released time awards and the filling of previously vacant full-time lines, some of which were filled by contingent faculty.

“It’s a really big drop, and we do have concerns, especially because the administration has been so hostile,” Fomalhaut said.

The union said Schneller received a letter of warning from Cornish accusing him of violating the CBA by calling for a strike.  Schneller said he was threatened with future disciplinary action “up to and including termination,” and the administration asked for the union to retract the open letter.

The union stated that it was not calling for a strike but rather suggesting that continuing faculty members consider a voluntary reassignment of summer overload credits to contingent faculty members.

“If our suggestion were followed, the same classes, taught by qualified IC instructors, would be offered without adverse impact on the student experience,” the union stated in a June Intercom post. “Instead of calling for a strike or work stoppage, we were asking for more work, not less.”

Additionally, the union stated that the clause does not apply to tenure and NTEN faculty at the college because they are not members of the bargaining unit. The union also argued that this suggestion did not interfere with teaching duties because overload credits totaling over 24 credit hours in an academic year are voluntary.

The union filed a grievance, stating that Schneller was discriminated against for exercising legitimate union activity. According to the union, Cornish denied the grievance. The union then took the matter to arbitration with the AAA.

The arbitrator found that Schneller’s actions did not warrant disciplinary warning, and the college has been ordered to expunge the warning from Schneller’s file.

“Their decision to pursue a lengthy and costly legal fight, at a time when ostensible financial constraints are being used as a justification for mass terminations among staff and faculty, displays a clear error in judgement,” the union stated in a Feb. 19 press release.

Schneller said the campus community needs to continue to resist the APP.

“It is important for the campus community to recognize the gulf that separates the administration’s public rhetoric from its actual behavior,” Schneller said via email. “While the [Senior Leadership Team] regularly issues progressive-sounding proclamations regarding their ostensibly compassionate, humane and equitable leadership, as a union we have experienced the harsh reality of a top-down corporate management style and deep hostility to any challenge that might alleviate the profound inequities and exploitation of contingent labor at Ithaca College. What concept of compassion could possibly have motivated the administration to threaten me with disciplinary punishment for posting an appeal for faculty solidarity and mutual aid during a global pandemic? In what sense is it humane and equitable to engage in a mass termination of the most vulnerable faculty at IC without having explored alternative options?”

Maley said that the college accepts the arbitrator’s determination.

“As outlined in the Collective Bargaining Agreement, the Union and the College have agreed to use binding arbitration to resolve certain types of disagreements that they are unable to resolve among themselves through the grievance process,” he said via email. “The arbitrator found in this case that conduct that the College felt violated the letter and spirit of the no-strike clause fell outside the bounds of that particular clause.”

Emily Rockett, assistant counsel in the Office of the General Counsel, said to The Ithacan in a June interview that the college wanted the union to talk directly with administration rather than posting on Intercom.

“I think a factor that doesn’t come through in Intercom is that the college and the union have labor management committees that meet to discuss issues,” she said. “Part of the response to this was to encourage the contingent faculty to use that channel and talk to the administration management committee about the things that they wanted.”

In response to the union’s original letter, a group of tenured and tenure-track faculty issued a letter of solidarity that laid out potential guidelines for the administration to follow. These guidelines included honoring multiyear contracts with contingent faculty; ensuring that department chairs retain seniority and preferential rehiring of contingent faculty members who have been laid off due to COVID-19 class cancellations; and that administrators do not contest unemployment insurance claims. The letter also requested that any attempt to eliminate or consolidate programs that have not been proposed by faculty responsible for those programs and degrees be actively resisted.