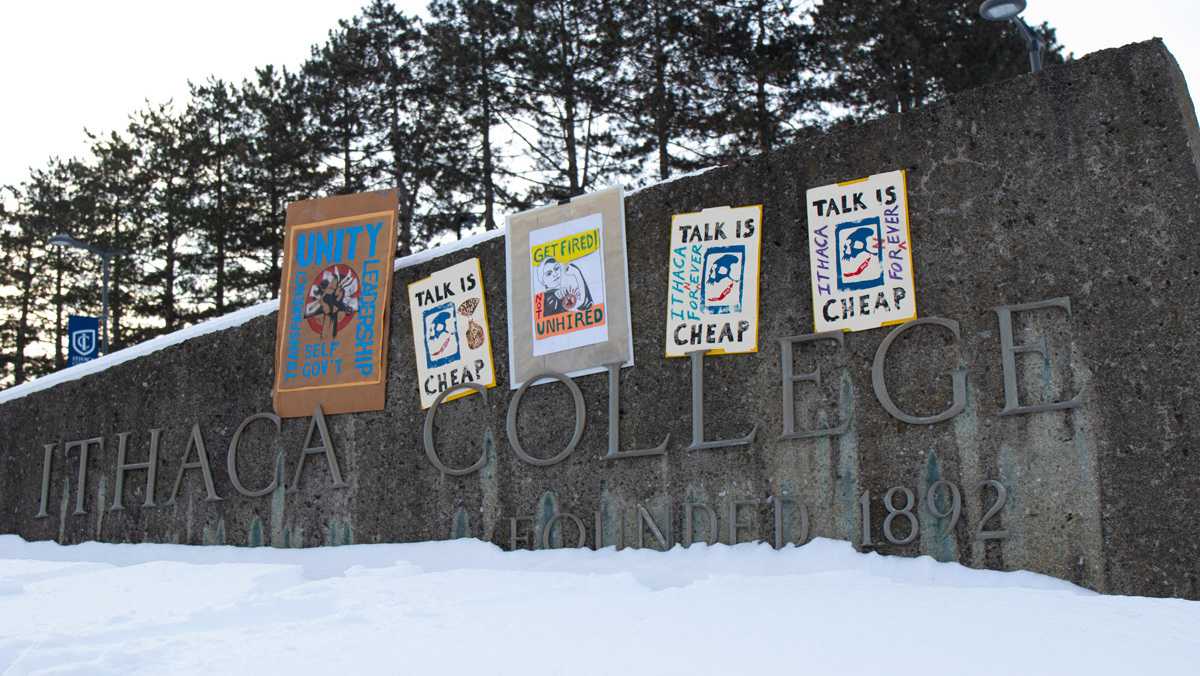 Fae Dremock, assistant professor in the Department of Environmental Studies and Sciences, has been teaching at the college for seven years. She was hired as the result of a national search and is first generation and Latina. She specializes in environmental humanities and often encourages her students to reevaluate the way they view social and environmental justice.

On Jan. 14, one day after the draft “Shape of the College” document was released, Dremock was notified that her position was recommended to be cut.

“I’ve been calling it the ‘Ithaca Chainsaw Massacre’ because that’s what it is,” she said.

Dremock makes up just a bit of the 116 full-time equivalent (FTE) faculty positions that have been recommended to be cut in the draft “Shape of the College” document, which was released to faculty, staff and students Jan. 13. The document also recommends 26 major, program and department discontinuations. The campus community has grown increasingly resistant to the Academic Program Prioritization (APP) process throughout the fall semester. Just a few weeks short of final decisions being made, more members of the campus community are voicing their opposition to the mass layoff. 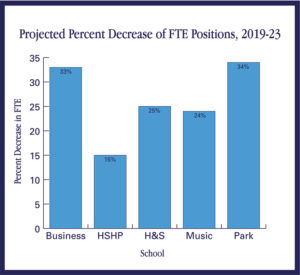 The Park School will be affected the most by the cuts. Laurie Koehler, vice president for marketing and enrollment strategy and co-chair of the Academic Program Prioritization Implementation Committee (APPIC), said this was not a targeted move.

“We tried to look at it holistically,” she said. “There was never a discussion of, ‘We’re aiming for a certain percentage for any particular school.’”

Brad Hougham, associate provost for faculty affairs and co-chair of the APPIC, said the contract status of faculty members and student enrollment, retention and graduation rates in departments, programs and majors affected the APPIC’s decisions.

Cornish previously said the APPIC was reviewing programs that do not receive much student interest.

Hougham said Section 4.9.8 of the Ithaca College Policy Manual guided decisions about which faculty positions would be terminated. The policy states that terminations resulting from the discontinuation of a program will be done in the order of part-time per-course faculty; adjunct faculty; faculty employed by term appointments; non-tenure-track faculty; tenure-eligible faculty; and tenured faculty. 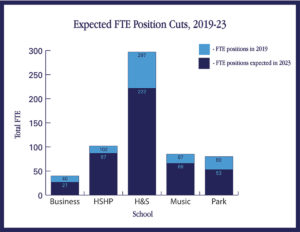 The APPIC decided not to eliminate tenured or tenure-eligible faculty members, despite La Jerne Cornish, provost and senior vice president for academic affairs, previously saying that tenured faculty members were at risk of being cut.

Hougham said eliminations were not based on individuals but rather positions. He said deans of the schools are in charge of notifying faculty members their positions have been recommended for elimination.

However, because the interim deans for the Park School, the Business School and the School of Music are still faculty members, they are not a part of the APPIC. They are members of the Academic Program Prioritization Advisory Committee (APPAC), a group that provides context that supports data gathered by the APPIC.

Hougham and Koehler said faculty members whose positions have been recommended for elimination either already have been notified or will be notified by March 1.

Most of the professors who self-identified that their positions were proposed for elimination are from H&S and HSHP. Hougham did not specify if any professors from certain schools were notified before others.

Koehler said the APPIC met with all of the deans to inform them of the recommendations before the draft document was released.

Koehler said that these are recommendations and that final decisions have not been made.

“There was never a question about the quality of the actual programs,” Koehler said. “I think that made it much harder, to know that these are high quality programs and that we can’t do everything and be everything for everyone anymore.”

Michael Horn, head of strategy for the Entangled Group, an education venture organization, and education writer, said the cuts will affect the feelings within the college community.

“They aren’t ever what someone wants to see happen,” he said via email. “At the same time, they don’t surprise me. The business model of small colleges, particularly those far outside of major cities, have been under significant duress for some time now. Expenses have continued to rise, and it’s been challenging for revenue to keep pace.”

Collado and Bill Guererro, vice president for finance and administration, spoke about the college’s financial issues at the All-College Gathering on Feb. 9.

He said the COVID-19 pandemic has forced colleges like Ithaca College to make cuts to survive.

“The cleanest way to do that without declaring higher education’s version of bankruptcy —  known as financial exigency — is to cut whole departments,” he said via email. “This right sizing is painful but also probably necessary to survive.”

Dremock said that being notified that her position will be eliminated, even though the document has not yet been completed, makes it seem like the APP process is rushed.

Hougham said he has not been present for any conversations between deans and faculty members about recommended position cuts.

“I think the intention for the conversations was to communicate with the faculty as soon as possible that their positions were being recommended for elimination or nonrenewal, for those who are on shorter, one–year contracts,” Hougham said.

Final decisions about faculty, department, program and major cuts will be made in late February, when President Shirley M. Collado and Cornish will approve the document.

To fight the cuts and push for shared governance, some faculty members are creating an Ithaca College chapter of the American Association of University Professors (AAUP). The AAUP works to develop standards in higher education and advocates for academic freedom and shared governance.

Dan Breen, associate professor in the Department of English and chair of the college’s AAUP chapter, said that the group is creating a petition urging the college and the Ithaca College Board of Trustees to reject the recommendations in the draft document.

“Different constituencies have different ideas about how shared governance should operate,” he said. “In the current climate in particular, having a really clearly articulated version of shared governance is important.”

Tom Pfaff, professor in the Department of Mathematics, said he thinks that giving professors a warning that their positions may be cut while the plan is not yet finalized is bad practice.

“This idea that maybe some of them will get their jobs back, that’s a rather cruel thing to do to somebody,” Pfaff said. “Faculty members are looking for jobs, trying to figure out what their next steps are.”

Pfaff said he is unsure if the college will be a better place for students after the APP process is complete.

“If you destroy the morale of the campus, in particular the faculty, how does that impact how they interact with students?” he asked. “Does retention go down? Does it get harder to recruit students?”

Juan Arroyo, assistant professor in the Department of Politics, said he was notified that his position was recommended for elimination.

Arroyo said he is upset and disappointed. He said he understands that the COVID-19 pandemic has accelerated the need to cut faculty positions, but because of how widespread the cuts are, he thinks they should be spread over a longer period of time.

Throughout Fall 2020, the Open the Books coalition, a group of students, faculty, staff and alumni that are calling for financial transparency and shared governance from the administration, held events to voice its opposition to the cuts. The coalition held two rallies Feb. 8 to protest the cuts and demand financial transparency.

The Faculty Council asked the Senior Leadership Team (SLT) to delay the APP process in October 2020. The SLT denied the request. The Faculty Council is holding a vote for all faculty members to voice their opinions about the draft document.

In a letter to alumni, the board expressed its support for the APPIC and the APP process.

“The APPIC has taken this extremely seriously, and despite criticism by some on campus and on social media, the Board of Trustees is confident that this process has been carefully conducted, data driven and consistent with our faculty handbook,” the board said in the letter.

Alumni have voiced their disapproval of the draft document by forming the Facebook group “IC Alumni Against Austerity.” Samantha DiFalco ’18, Elizabeth Lena ’18, Chris Zivalich ’12 and Sara-Maria Sorentino ’08 started the Facebook group Jan. 21. The group has over 1,000 members.

Anna Gardner ’19, a member of IC Alumni Against Austerity, said she was involved in creating the strategic plan while she was a student and knew that resizing would be necessary. She said that while she believes the cuts were inevitable, she is encouraging the administration to slow the process and be more transparent with its decisions.

“I just feel like the way it’s being handled is not as sensitive or understanding as it could be to the college community, and the way that the communications that have gone forward are really creating this stressful, scary environment for people,” Gardner said.

Greg Peterson ’09 said he would like to get a better understanding of why and how decisions are being made.

“I mean, even those administrators, you look at the amount of time they spend there,” Peterson said. “They’re just ships passing in the night like me. The culture and the value of that school is in those faculty members.”

Zivalich said that changing the college’s programs may cause alumni to feel disconnected from the college.

“We are people who can literally support the institution, and if they make Ithaca unrecognizable to us essentially, that’s not something that we’re going to be convinced to support,” Zivalich said.

The college has seen decreased alumni donations in the past decade with alumni participation dropping from 12.2% in 2010 to 6.4% in 2019. In a letter to the SLT and the Board of Trustees, a group of alumni who are concerned about the cuts stated that it will earmark future donations for the purpose of supporting and preserving programs and faculty positions.

Students have also been vocal about their disapproval of the draft document.

Senior Agnes Scotti created a petition for the campus community to express its lack of confidence in the draft document and the APPIC’s decisions. As of Feb. 10, the document has 413 signatures.

“We MUST use our voices as students!!” the petition stated. “We cannot stay silent! Let’s show IC that they cannot just fire our professors, many of whom have shaped and enriched our college experience!”

Senior Rebeka Kashkin said it is frustrating to see professors that she knows and cares about get fired.

“I’m honestly just really nervous for the professors that I care about,” Kashkin said. “I look on the list, and I’m terrified to see their names.”

She said that as a senior, she is glad that she is graduating soon so she will not have to give more money to the college due to her concerns with the current administration.

Freshman Colin Nacion is a double major in English education and theatre studies, two departments potentially being affected by the cuts. The “Shape of the College” document proposes FTE cuts in the Department of Theatre Studies, while the education program may be cut.

“I personally don’t think this cut will be beneficial for the school,” he said. “Frankly, the people in charge still haven’t been super clear and transparent about what they even hope to achieve in doing so.”

Senior Raechel Councill said she does not think the administration is being completely transparent with students and faculty. She said some of her professors did not feel informed regarding the faculty cuts.

“The fact that faculty, from everything that I’ve been hearing, have been finding out everything at the same time as the students has been really concerning to me,” she said. “I don’t understand how the Ithaca administration expects their faculty to be helpful to students if the faculty don’t know what’s coming down the drainpipe.”