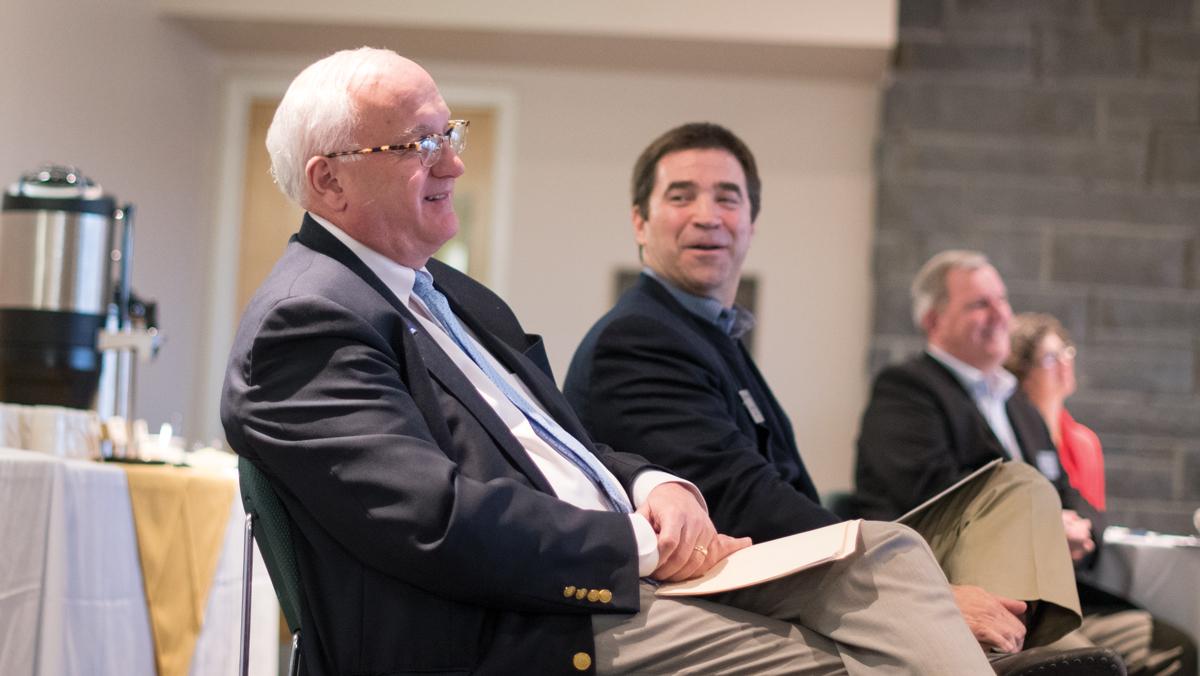 Kristen Harrison/The Ithacan
From left, Tom Grape, chair of the Ithaca College Board of Trustees, and Vice Chair David Lissy held an open conversation session Feb. 15. The board of trustees was on campus for two days of meetings.
By Ryan King — Staff Writer
Published: February 21, 2018

After wrapping up their second meeting of the academic year, two members of the Ithaca College Board of Trustees held an open conversation session Feb. 15 to get feedback from the community.

The event was open to everyone on campus and began with board Chair Tom Grape and Vice Chair David Lissy giving a breakdown of their meetings. The board met with President Shirley M. Collado and the tri-council — which includes the Faculty Council, the Staff Council and the Student Governance Council — to discuss issues including the Middle States accreditation and building trust on campus. Both Grape and Lissy said board members try to spend as much time as they can with constituencies while on campus.

Then Grape and Lissy took questions and asked for feedback from those in attendance. Senior Roswell Ecker quickly stood up and said they felt that the board and the administration contributed to and perpetuated a culture of silencing survivors of rape on campus, especially to victims that had been assaulted by women. They wanted to know what actions the board would take to change that.

Ecker said that they had previously emailed the board the same question. After the event, Ecker said their email was an intentional reference to Collado’s past and that Grape had responded by stating the board supported Collado and survivors.

In January, The Ithacan reported that Collado pleaded no contest to a sexual abuse charge in 2001. Following that report, the board released a statement of support.

Ecker said they were not satisfied with the response the board gave.

“I sent the Board of Trustees an email right when the news broke, and received a very generic, empty response, which is why I asked the question again in person,” they said via email. “I [would] like to see more preemptive measures in terms of tackling issues of assault on campus. In light of this, and the precedence it sets for claiming innocence being enough to avoid consequences, it’s crucial that we have programs in place not only to support survivors after the fact, but to prevent assaults in advance.”

Grape and Lissy cited a number of resources available on campus, such as the Center for Counseling and Psychological Services, that are designed to help address those issues. Grape and Lissy said they hope people do not feel ostracized and unable to speak out on campus and said that the culture of silence on campus needs to change. They then said that if anyone can think of ways that could be fixed, they could reach out to someone like Rosanna Ferro, vice president of the Division of Student Affairs and Campus Life, to make those changes happen.

Hongwei Guan, associate professor and director of the health sciences and human performance China exchange program, asked the next question. Guan is an advocate for creating an Ithaca College campus in China, which was part of the IC 20/20 initiative. He asked about the status of that initiative, and Grape told him that he hopes the college creates a China center. Grape also said the college is in a little bit of a transition period and eventually Collado will unveil a strategic vision that would likely include initiatives like that.

“I think in general, they are supportive, but there are a lot of things that the board and the administration are trying to handle,” Guan said about Grape’s response. “But I think we cannot wait on this.”

“It is our objective over time to continue to have the board increase in its mix of diverse people,” he said. “I think we’ve made some good progress in that way. But I think we will ultimately be better the more diversity we have.”

“The board has been working over the past couple of years to increase transparency and our visibility with the community, and this is a step in that process,” Grape said. “Ideally we’d like to do [this] after each meeting. That’s not always possible depending on our schedules, [but] we’re going to do it as regularly as we can.”