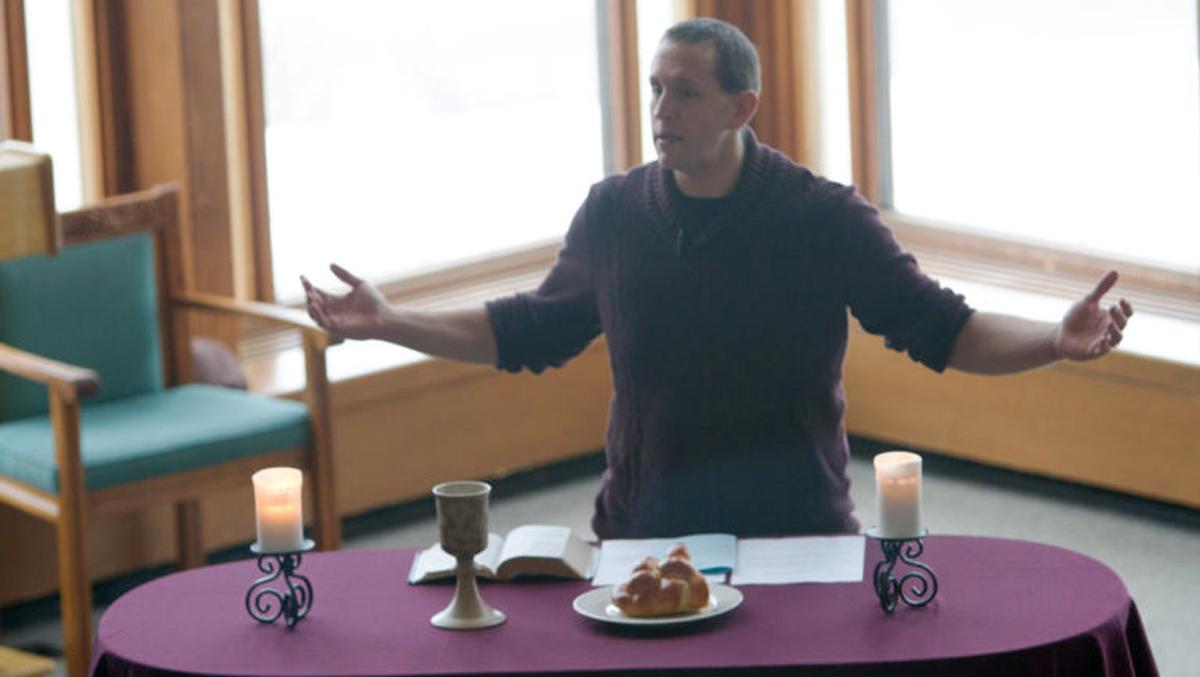 Elias Olsen/The Ithacan
Rev. James Touchton, chaplain of the Ithaca College Protestant Community, will resign from his position at the end of Fall 2018, according to a statement Touchton posted in an ICPC alumni Facebook page as well as an Intercom announcement posted Oct. 25.
By Grace Elletson, Krissy Waite — Editor in Chief, Staff Writer
Published: October 26, 2018

Rev. James Touchton, chaplain of the Ithaca College Protestant Community, will resign from his position at the end of Fall 2018. Touchton and the ICPC came under criticism last spring for being exclusive toward LGBTQ students and students of color.

Touchton said he would be resigning from his position in a statement obtained by The Ithacan that was posted in a private ICPC alumni Facebook page. The news was also shared in an Intercom announced posted by Hierald Osorto on Oct. 25.

Many students came forward in Spring 2018 detailing experiences of exclusion or discomfort in the ICPC, particularly those who are LGBTQ students. In response to these allegations, Touchton said he was working to make the community a more inclusive space by holding book–club discussions in the ICPC about race and by holding speaking events to discuss more diverse topics in the religious community.

After the allegations about the ICPC were made public, an organization called IC Color was formed in order to address issues in the religious community. It issued a series of demands to the college concerning the ICPC, some of which the college responded to. The organization was formed by seniors Vanessa Zimmerman and Annalise Haldeman, who said, as previously reported by The Ithacan, they felt excluded from the ICPC when they came out as gay in the fall of 2017. Both said they wanted the college to remove Touchton as chaplain.

Touchton said he did not wish to comment further on why he is resigning but did confirm that he will be leaving the college at the end of this semester. In the Facebook post, he said the stress of the “students’ claims” have taken a toll on his mental, physical and spiritual health.

“For anyone who has even minimally kept up with the events of the past year regarding students’ claims of racism and homophobia, the subsequent organization of IC Color, and the degree to which all of this has become political and taken on a life of its own in the media, it ought to come as no surprise that it has been taxing,” Touchton said in the post. “I have worked very hard to take the grievances seriously and help the community respond well and grow from them. Nonetheless, the half-truths and misrepresentations and other attacks on myself and the community have gained traction and are still wreaking havoc a year later. I have reached my limit.”

“IC created a new position of Director of Religious and Spiritual Life and that individual joined us this semester,” Touchton wrote. “Shortly upon his arrival, the college, without any transition period or dialogue with us, changed the way they fund their religious communities. Essentially, we will no longer receive the annual allocations we have gotten for 30+ years and instead will have to submit a proposal for any funds we wish to have access to. The caveat is that those funds cannot be used for salary or personnel expenses. That effectively means the PC will never have a full-time chaplain again.”

Osorto said parts of Touchton’s statement were inaccurate — he said conservations about adjusting the way religious communities are being funded at the college have been ongoing since before his arrival and that Touchton was included in those conversations. He said he could not comment on Touchton’s resignation because the college does not comment on personnel matters like resignations, but he said he would continue supporting Protestant students at the college moving forward.

Osorto said the money that has been given to the independent religious communities on campus — like the ICPC — has never been intended to fund salaries; rather, the money was designated for the communities’ programming. Because the college will be redistributing money more equitably to more than the three religious communities currently housed in Muller Chapel — ICPC, the Catholic community, and Hillel — those three groups will receive less. Osorto would not comment on whether the salaries of the chaplains are funded through the college’s programming money.

Given these budget adjustments, the ICPC would likely not be able to fund a full-time chaplain. Osorto said he would be willing to work with Protestant students to find religious affiliates who could serve as pastoral leadership in the ICPC through alternative avenues — possibly funding a chaplain position through alumni money donated to the independent religious community, or by connecting students to locals pastors. Rosanna Ferro, vice president of the Division of Student Affairs and Campus Life, echoed Osorto’s comments.

“We remain committed to supporting our students in the Protestant Community,” Ferro wrote via email.

“James … is caring and loves the community and those who are a part of it,” John said. “So that doesn’t stop because he will be leaving as chaplain.”

Zimmerman said via Facebook Messenger that she thinks Touchton’s resignation is beneficial for the future of the PC and that it is important to continue to hold leadership of the PC accountable.

“It does help the PC,” she said. “Changing leadership, diversifying leadership and placing expectations on those who will lead from here on out is at least a small fraction of what we hav[e] been asking for. We wish no ill on James or the community but know that the community has potential to be a space this campus needs and deserves, but it isn’t there yet. And until it is, until I and others feel safe to go back to Mueller [sic] Chapel, we intend to keep pushing for our demands that will generate sustainable and systemic change.”

She said that when IC Color began its campaign she did not think that Touchton had the capacity to lead fundamental changes in the PC.

“We didn’t have faith in his ability to facilitate a community that would hopefully and eventually foster different identities once systemic sustainable change was put in place,” she said.

Kelsey MacKellar ’13 was involved in the ICPC for the entire time she attended the college. For two of those years, she was part of the ICPC council and was a representative on the Interfaith Council for three years, she said.

She said that when she found out about Touchton’s resignation she was upset and frustrated but not shocked because of past criticism and current pressure placed on the ICPC and Touchton.

“I was heartbroken but not surprised,” she said. “It was really painful to watch that happen, so I wasn’t shocked that this might be a solution, especially because other communities on campus wanted the Protestant community defunded.”

MacKellar said she feels that the communities and individuals that have made claims against him and the PC were not open to discussion about these issues. She said she thought that if it had been a more open conversation between communities and individuals working to understand each other, Touchton may not be resigning. MacKellar said she wanted to add that she is bisexual and a member of the LGBTQ community and was when she was a student in the ICPC community.

Lauren Goldberg, executive director of Hillel, declined to comment due to unavailability as a result of counseling students who are processing the recent Pittsburgh synagogue shooting.