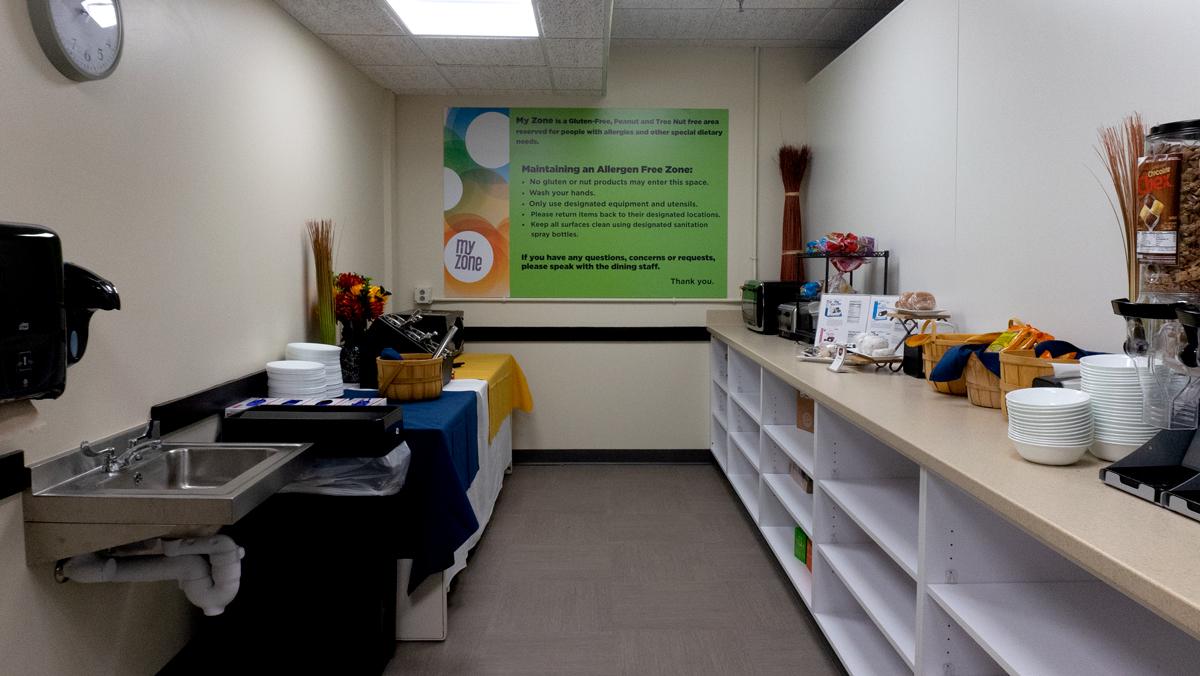 Sabrina Chang/The Ithacan
Ithaca College dining services have implemented a new food allergy dining area for those in the IC community who have allergies and sensitivities to certain foods.
By Elizabeth Henning — Staff Writer
Published: February 18, 2019

A new area located in the Campus Center Dining Hall opened at the beginning of Spring 2019 to provide a way for students with food allergies and intolerances to safely eat in the dining hall.

The area, called “My Zone,” is a locked room that students with allergies or intolerances can access with their ID cards after they have been authorized by dining services. Inside the room, there are a variety of foods that are safe from cross–contamination and allergens like nuts and gluten. My Zone is located behind Simple Servings, toward the back of the Campus Center dining hall. Food allergies cause an immune system reaction, whereas food intolerances are less severe and normally limited to the digestive system.

Jeffrey Scott, director of dining services at Ithaca College, said that before the college established My Zone, there was no separate, dedicated area for students with food allergies. He said the area is primarily designed for students with nut and gluten allergies and intolerances, but any student who registers with dining services as having an allergy can have access to the area.

Scott said dining services wanted to focus on nut and gluten–related allergies because nut allergies tend to be more severe and gluten intolerance is one of the most common dietary problems for students.

Scott said the dining hall previously offered gluten and nut free foods, but they were not contained, so cross–contamination was still an issue. Multiple cases of allergic reactions that resulted from mishandling of food in campus dining halls have occurred in the past, according to previous reporting by The Ithacan.

Scott said the college held a dietary roundtable last semester with students who have allergies and dietary restrictions to get a range of student opinions about how the dining hall can better handle food to prevent allergic reactions.

“This was something we heard loud and clear from a number of students — that if we could have a dedicated area, that would really be helpful,” Scott said.

Sophomore Sara Schneiderman, who has celiac disease, a condition where gluten damages the small intestine, said accommodations for students with dietary restrictions allow them to be included in campus life.

“Eating is as much social as it is biological,” Schneiderman said. “To have to find a separate place to get your food from … is challenging.”

Sophomore Eden Strachan said the former allergy area was not effective because it was not protected from cross–contamination from other students without allergies who were eating in the dining hall. While she has never had a reaction due to cross–contamination in the dining halls, Strachan has a life-threatening nut allergy that always has her concerned about the issue.

“I was aware of the station before, and I was like, ‘Oh this could be really problematic,’” Strachan said. “They had little signs … but people don’t care. They could care less. They are not affected by it, so they’re not aware.”

After the roundtable took place, several students with allergies — including Schneiderman and Strachan — wanted to form a club called Food Allergy Advocates that would work with dining services to promote allergy awareness and safety in the dining halls on campus. Schneiderman said the group is in the club recognition process now and hopes to be a recognized club by the end of the semester.

Schneiderman also had problems with the previous allergy area because none of the foods were compatible with her other restrictions.

“For me, the food that they served there never worked with all my dietary restrictions and my allergies,” Schneiderman said. “It was really frustrating for me because I was spending a lot of time focusing on how I was going to be able to get healthy food.”

Scott said the area has been in the works for a few years as an ideal practice, but the college lacked the space to implement it.

“We’ve kind of viewed it as a pending opportunity should we get space,” Scott said.

Prior to being renovated into My Zone, the room near the back of the dining hall was used as a meeting space, Scott said. The college approved the space for a dedicated allergy area last fall, and the room was renovated to be opened at the beginning of Spring 2019.

If it is a student’s first time using My Zone, they check in with a staff member who records their name and student ID number. At the end of the day, the dining hall sends the list to the ID office, and next time, the student is able to use their ID card to access the area. No backpacks or coats are allowed into the room, and students must wash their hands before entering to avoid cross–contamination.

Inside the room, there is a variety of food, ranging from bagels to frozen meals and fruit, plus a microwave for students to use. Scott said dining services is getting feedback on the food selection and hopes to tailor the offerings to what users enjoy.

Scott said he is excited for the potential of the new space.

“I think, certainly, one of the things we’re always trying to do is improve our service,” Scott said. “Certainly, for folks that have dietary restrictions, having an area that supports them better, we’re thrilled to have it.”

Schneiderman said My Zone is a good start to ensuring that students with allergies can eat safely in the dining halls.

“If we could get to the point where everyone who has dietary restrictions can know that they are grabbing something that is safe for them to eat and not have to worry about cross–contamination, that would be great,” Schneiderman said. “The allergy section is such a great start to that because it is knowing that no one is going to bring in outside food and contaminate it.”

Strachan said she hopes My Zone is only a start and that dining services will continue the conversation about food allergies.

“This was a huge step, and when I saw it … I was overjoyed,” Strachan said. “Just the fact that they made a safe space means a lot to me. I think they’re going to continue to do that.”

Student forms club to support those with food allergies