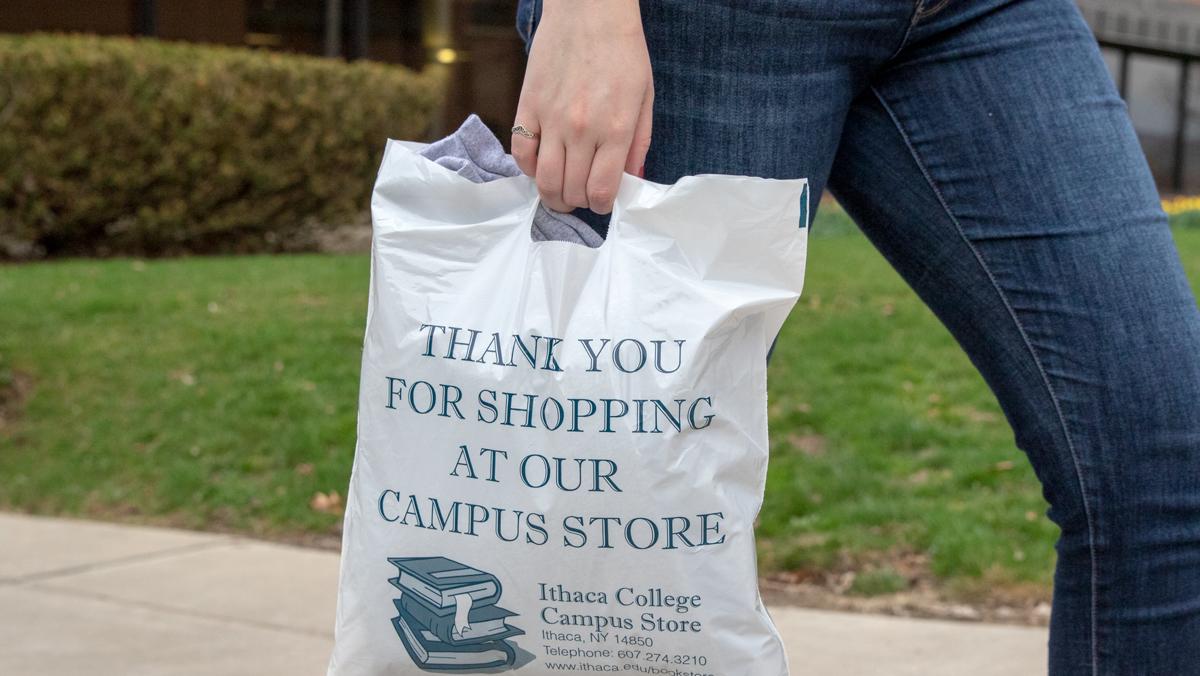 New York Governor Andrew Cuomo signed a law April 22 banning plastic bags from the state, and it will be implemented by March 2020. The Ithaca College Campus Store, which is currently the only shop that uses plastic bags on campus, will begin phasing them out.

Other retailers on campus, like Mac’s General Store, have previously switched to paper bags or have stopped using bags altogether. The law applies to all single-use plastic bags statewide but will exclude produce bags, garbage bags and restaurant take-out bags. Individual counties in New York may implement a fee on paper bags to encourage the use of reusable bags instead; although, this would not apply to the Supplemental Nutrition Assistance Program or the New York Special Supplemental Nutrition Program for Women, Infants and Children recipients, which are state programs to help low-income families afford groceries.

Anna Kelles, vice chair of the Tompkins County Legislature, said Tompkins County will be charging a fee for paper bags. She said reusable bags will be provided without charge to low-income citizens as well as people with disabilities.

Kelles said that she believes this state law will benefit the environment of Tompkins County. According to the New York State Department of Environmental Conservation, only 12 percent of plastic bags are recycled in the U.S., despite the average American using approximately 1,500 single-use plastic bags per year, a percentage that is not enough to address New York’s plastic pollution issue. The document states that plastic bags are harmful because they are created through the use of fossil fuels, are a source of litter, are harmful to marine life and cause mechanical problems in wastewater management plants as they get tangled in equipment.

“The environmental impact will be huge,” Kelles said. “Communities that have done this have seen massive decreases in plastic pollution.”

Bags made from recycled material, like the ones the campus store has been using, also do not decompose which makes them harmful to the environment. According to Rick Watson, the director of the campus store, the store has not yet decided what they will use to replace the plastic bags with.

“We will continue to use our plastic bags until they are depleted and figure out an alternative just before that happens,” Watson said.

There are several student-led movements on campus against the use of plastic bags. A petition titled “If You Can’t Reuse it; Refuse it – Eliminate Plastic Bags at IC” was started by sophomores Emmeline Klatt and Alyssa Ferreira on April 15 and has received 656 signatures as of May 1. The goal of the petition is to convince the campus store to stop using plastic bags now.

Klatt said the store should stop using plastic bags now so that it will have time to transition to a different option before they are required to in March of 2020.

“The New York state ban is going to force them to stop using plastic next march so why not start now,” Klatt said. “Not only are they toxic for human health when the chemicals get in the soil and air, but they affect 267 different marine species and kill over 100,000 marine animals every year.”

Watson said that while he was not aware of the petition, the store has not purchased any plastic bags for future use and is looking into other options like reusable bags.

IC Impact, an environmental advocacy club on campus, encouraged environmentally friendly practices by collecting plastic bags during sustainability week and gave away a $50 Wegmans gift card to a randomly selected donator. The club took the donated plastic bags to the Wegmans bag return. Wegmans, which sponsored the collection, uses the plastic bags they collect to make new bags. The club has held plastic bag collections in the past and has been successful, according to sophomore Hunter McHenry, a member of IC Impact.

“We’ve had enough to fill a three-person dorm in Terraces,” McHenry said. “We get a lot; it really gains momentum.”

McHenry said the main goal of the collection is to spread awareness about plastic bag use.

“It’s a small gesture,” McHenry said. “It’s not like our actions alone will make any huge difference, but we hope that by spreading awareness that it’s important to recycle plastic bags, that they’re harmful and that we can maybe change something about people’s lives that will make a big change in the future.”