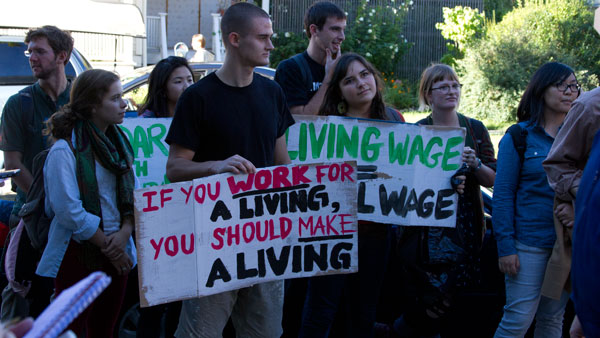 After deciding to become a living-wage employer, the City of Ithaca received official certification from the Tompkins County Workers Center last month, taking a step forward in the living-wage movement.

The TCWC said it is hopeful that more businesses in Ithaca will follow suit to become living-wage employers.

The city became a living-wage employer Oct. 1, which means that people who are employed by the city will now be paid $12.62 an hour, according to the Alternatives Federal Credit Union’s bi-annual living-wage study. On Nov. 5, the TCWC certified the city and added it to the growing list of living-wage employers in the county.

The biggest impact on the city in terms of becoming a living-wage employer is financial, Myrick said. Providing a living wage to all city employees is expected to cost between $90,000 and $100,000 per year. Myrick said the additional funds are currently built into the budget and will come from property and sales taxes.

When people hear the term “living wage,” they often think of the federal minimum wage, which is currently $7.25 an hour. However, the two terms have different meanings.

A living wage is defined as the money it costs for a single person working full time to be able to live in a certain area. This takes into account housing, transportation and health care, as well as recreational activities. Living wages differ across the country. For example, it costs less to live in rural areas than it does in cities.

Tompkins County became a certified living-wage employer in 2006, but recently faced criticism from community members for hiring subcontractors who do not pay a living wage. The TCWC has organized several rallies and protests over the past few months for people to speak out on behalf of the workers. Last month, the TCWC sent a petition with 1,157 community members’ signatures to the county legislature, calling for a living wage for contracted employees.

Last year, Pete Meyers, the head of the TCWC, approached Ithaca Mayor Svante Myrick about providing a living wage for city employees. Myrick said he was interested in the idea.

Myrick said the city wanted to provide a living wage to all employees so they are better able to support themselves and their families without having to supplement their income with government assistance.

“I was raised in a family that didn’t have a lot of money,” Myrick said. “My mom worked multiple jobs — almost always at a minimum wage — which was tough. I know the toll it takes on families.”

Myrick said he sat down with Meyers, as well as officials of the City Controller’s and Human Resource’s Offices, to figure out how much money the city would need to raise salaries to a living-wage standard for the city’s lowest-paid employees.

The idea was proposed to the city’s Common Council, which ultimately supported giving living wages to all city employees, and in November 2012 the council voted to provide the funding.

Leni Hochman, chief operations officer of Alternatives Federal Credit Union, was in the group that began living-wage studies in Tompkins County in 1994. Hochman said the credit union had employees who were struggling financially, so they launched the first living-wage study to look at exactly what people’s expenses were when considering the cost of rent, food, health care and extras, like savings.

“In my opinion, if somebody’s working full time, they deserve to be earning enough to [live],” Hochman said.

About 500 people are employed by the city, and Meyers said the majority of the employees already make a living wage. However, there are 85–90 seasonal employees who would now receive a living wage. He said having the City of Ithaca follow the example of Tompkins County and become a living-wage employer is a big step in the living wage effort.

“Having government entities declare this important kind of helps to set the tone for all other businesses,” Meyers said.

In addition to the TCWC’s efforts on behalf of the living-wage initiative, the Ithaca College campus organization IC LIPS, or Labor Initiative in Promoting Solidarity, works toward economic equality. In 2011, the group was instrumental in ensuring Sodexo workers employed by the college received a living wage.

“I don’t think a lot of people realize that sustainability is more than just environmental sustainability; it’s so that people can sustain their lives and so a living wage becomes a sustainable policy,” Bidon said.

He also said the city becoming a living-wage employer, and its living-wage certification by the TCWC, is a significant step in the movement for a living wage.