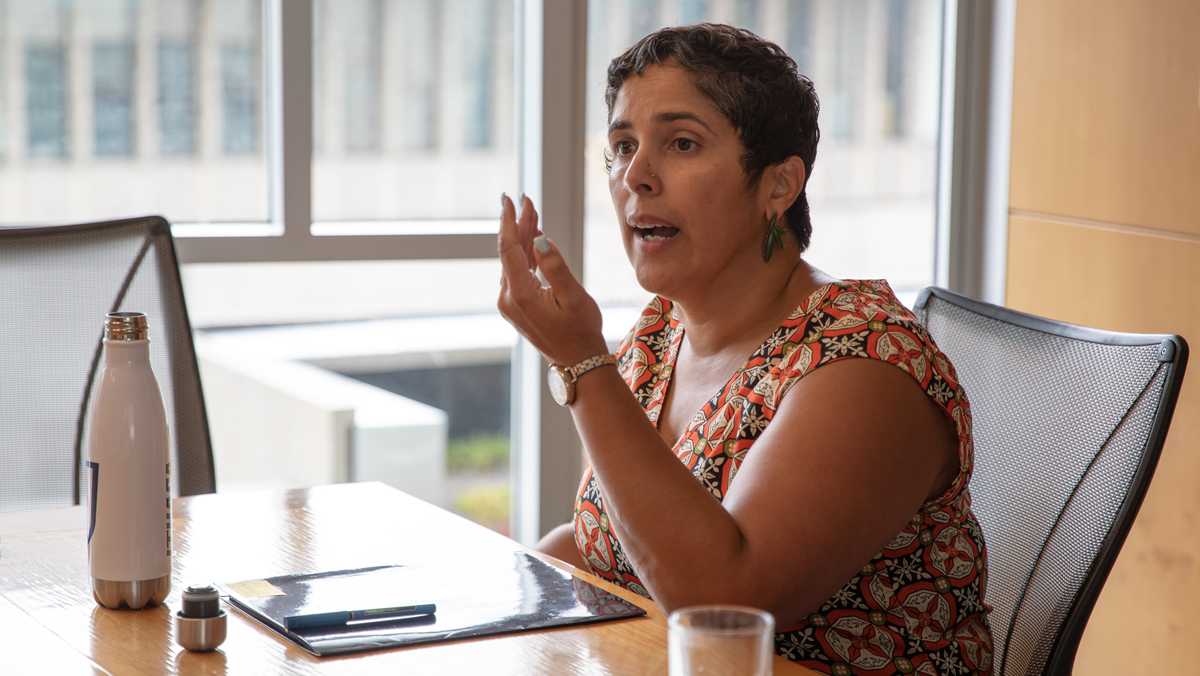 Ithaca College President Shirley M. Collado held a student media press conference – with media representatives from The Ithacan and ICTV – Sept. 6 to answer questions about topics brought up at the All-College Gathering and other changes occurring at the college.

“There’s no getting around the fact that we had to make some significant changes to address the needs of students,” Collado said. “That meant in the first year, in a very short amount of time, I was prioritizing student affairs in a way that this campus was asking for for a long time. I have done that in a way that I think is financially responsible and sustainable.”

Collado announced Sept. 21, 2017, that she added two new Center for Counseling and Psychological Services counselors and a Department of Case Management Services at the Hammond Health Center. Collado announced at the All-College Gathering that the budget surplus has decreased from $20 million to $5 million. The college has made numerous investments, including the new hires, which have contributed to the decrease in surplus money from the operational budget, Collado said. Additionally, an increase in financial aid, updated classroom technology and deferred maintenance projects contributed to the decrease.

She said this decrease in the budget was foreseen before her tenure at the college.

“This was forecasted years ago,” Collado said. “That just has a lot to do with the things I mentioned that we have invested in.”

The college is currently trying to identify new revenue streams to be less dependent on enrollment and fundraising, she said.

At the All-College Gathering, Collado said the college will be reducing its carbon emissions by 45 percent. At the press conference, Collado referred to Greg Lischke, director of the Department of Energy Management and Sustainability, and Rebecca Evans, campus sustainability coordinator in the Department of Energy Management and Sustainability, to answer the specifics about what is contributing to the reduction in carbon emissions. She said sustainable practices will be incorporated into the college’s five-year strategic plan that is currently in the design stage.

Former President Peggy Ryan Williams signed a binding climate contract with 393 other institutions across the country in 2007 to reduce their carbon footprints. Part of this Climate Action Plan is to reach carbon neutrality by 2050.

“There is no getting around that Peggy Ryan Williams was a champion for this,” Collado said. “I would underscore that when we are thinking about our strategic plan, we are thinking about sustainability of people, finances and environment. I am certainly committed to that remaining at the forefront of the core part of the success of the college.”

Collado also discussed the five-year strategic plan design process at the press conference. The plan is currently in the development process, which is being led by a design team.

Collado said she strongly encourages the entire community to get involved in the strategic planning design feedback process.

“I think what we need to be thinking about … is about what we will collectively decide as a college community that we are going to prioritize,” Collado said. “I will not be leading in a culture of fear. … That is why people need to be engaged in the strategic plan.”

She also said the plan is currently very vague because she wants the college community to provide input.

“I hope you heard me say loud and clear, also in my recent communications to the campus and at the All-College Gathering, that we want to build an inclusive and engaging plan,” Collado said. “That’s where we are at. I understand there is some confusion and ambiguity around that things being vague. There’s no plan yet. That, I want to make sure we capture really accurately.”