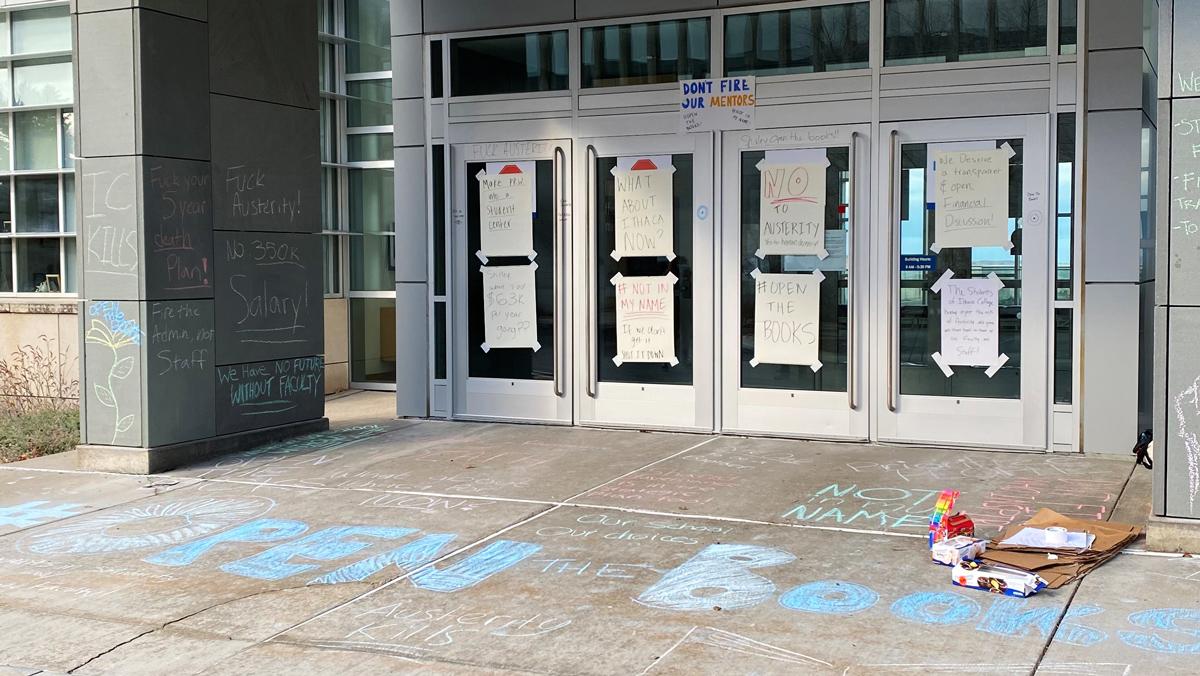 Photo Provided
In a Dec. 14 email to the college community, Ithaca College President Shirley M. Collado called the behavior unacceptable and referred to it as an act of vandalism. She said that it was disrespectful to do this on the same day as the December Graduation Celebration.
By Alexis Manore — News Editor
Published: December 14, 2020

Ithaca College President Shirley M. Collado condemned a display consisting of signs and markings calling for financial transparency from the administration amid faculty, staff and program cuts that members of the Open the Books Coalition created Dec. 13 at the Peggy Ryan Williams (PRW) Center.

The Open the Books Coalition — a group of students, faculty, staff, alumni and community members — is demanding financial transparency and shared governance from the college regarding the Academic Program Prioritization (APP) process. In its most recent act of protest against the impending faculty and staff cuts, members of the coalition hung posters and drew in chalk and permanent markers on the sidewalk surrounding the PRW Center and the building itself. The phrases written on the posters, sidewalk and building include “Open the Books,” “We Protect Us,” “Our School, Our Choices,” “IC Kills,” “Make PRW a Student Center,” “Stop Firing Our Mentors,” “What About Ithaca Now?” and “People Over Profits.” 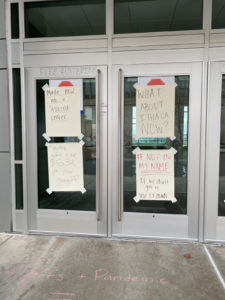 In a Dec. 14 email to the college community, Collado called the behavior unacceptable and referred to it as an act of vandalism. She said that it was disrespectful to do this on the same day as the December Graduation Celebration.

“This act displayed a lack of empathy as to how this selfish conduct would detract from our graduating students’ big day — and how it might impact all students as they go into their final exams during a stressful time,” the email stated.

At the December Graduation Celebration, which was held Dec. 13 over Zoom, some graduating seniors held signs calling for the college to open its books when it was their turn to celebrate on screen.

The Open the Books Coalition was formed after the college’s administration announced in October that it will be eliminating approximately 130 full-time equivalent faculty positions and that even tenured faculty were at risk of being cut. These firings come atop the at least 264 staff members who have been furloughed since March. La Jerne Cornish, provost and senior vice president for academic affairs, has said that these moves are in alignment with the strategic plan, Ithaca Forever, which had to be accelerated as a result of the COVID-19 pandemic’s effects on the college’s finances.

In her email, Collado condemned the profanity that was written on the building, like the phrase “F— Austerity,” and said that some of the disrespectful messages were directed at her specifically.

In pictures provided to The Ithacan, one poster stated, “Shirley, where is our $63K per year going?” Above one of the doors to the PRW Center, “Shirley Open the books!!” was written in marker.

“Equally as unacceptable as the vandalism itself, is the fact that this behavior put additional weekend work on the backs of our facilities staff, who spent hours outside in the cold on a Sunday evening to address the impact of this vandalism on our campus,” the email said. “I want to personally thank these staff members, as well as the public safety officers who responded, for your dedication and your effort.” 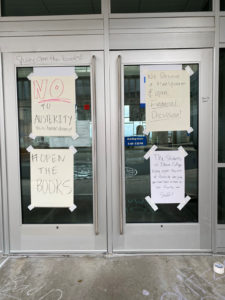 The Open the Books Coalition released a statement Dec. 14. In the statement, the coalition said that it did not intend to cause extra work for the facilities staff and that it fights for them as well.

“By responding to this action and none of our Zoom meetings, our rally or our Instagram actions, [the administration has] shown that they care more about property than people,” the statement said. “A building can be cleaned, but IC administrators are actively ruining lives, careers and the entire Ithaca College community.”

Tom Dunn, associate director and deputy chief of the Office of Public Safety and Emergency Management, said that the office is conducting an investigation into the incident.

Article 145, Section 60 of New York State Penal Law states that making graffiti is defined as etching, painting, covering, drawing on or otherwise placing a mark on public or private property with the intent to damage such property.

“No person shall make graffiti of any type on any building, public or private, or any other property real or personal owned by any person, firm or corporation or any public agency or instrumentality, without the express permission of the owner or operator of said property,” according to the New York State Penal Law.

Making graffiti is a class A misdemeanor, which, upon conviction, can result in up to one year in county jail or three years of probation. It will also include a fine of up to $1,000 or twice the amount of the individual’s gain from the crime.

In the few hours since Collado sent out the email to the campus community, Open the Books’ Instagram account has grown by over 200 followers.

The coalition posted a picture of the display Dec. 13 on its Instagram, with the caption, “A lil  ~impromptu~ art exhibit at PRW!”

In the comments on the photo, most of which were posted after Collado released her email, there were mixed reactions to the display.

“This isn’t good,” user @johnafucile wrote in the comments.

User @kkemi27 wrote, “I genuinely want to know why people hate Collado so much … y’all not happy with a female [person of color] president who has consistently made students her priority by making necessary budget cuts but maintaining tuition costs?”

The Open the Books account replied, “We definitely want to say we do not hate president Collado. Our movement is trying to hold the entire administration accountable as accountability is one of our school’s main principles. We believe these decisions should have been made through shared governance, not just … among the higher-ups.”

“Ok but why haven’t I seen an email about the peaceful/organized demonstration y’all manage to do?” user @flowergirl__xo_ said. “That email was so discrediting towards all the work y’all put into this cause.”

“The way the administration is going to call this violence, but not call firing over 100 faculty members during a global pandemic violence,” user @htsmms said in the comments.

“Wooow, came here from Collado’s email and … my god, the fact that she’s trying to frame things in her favor is so blatantly obvious,” user @znbroderick said. “It’d be funny if we weren’t talking about human lives and corruption and whatnot.”

In the email, Collado said that vandalism and vulgarity are inappropriate for working through difficult issues at the college.

“I understand how hard, emotional, and uncertain this time at the college is for all of us, but we are better than this,” the email stated. “Let’s elevate our discourse and our behavior. Because what happened yesterday advances neither a productive dialogue about the college’s future, nor the values of our shared humanity.”

In its statement, the coalition agreed with Collado’s call to elevate the college community’s discourse and behavior.