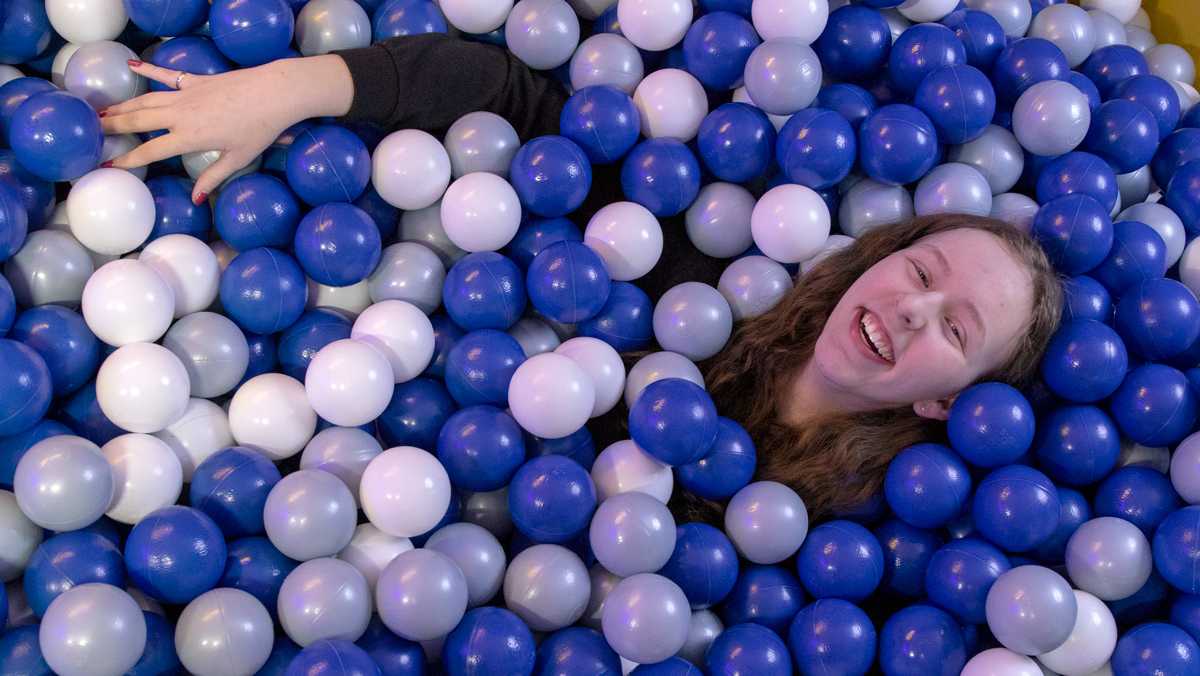 Molly Bailot/The Ithacan
Freshman Lynnette Hartwell jumps in the ball pit at the Ithaca College pop-up experience in the Recreation Center in the Campus Center. Students were encouraged to pose in the pit and post their pictures on Instagram using the ICPopUp hashtag.
By The Ithacan
Published: April 17, 2019

Ithaca’s 40th annual Take Back the Night march will be held April 26. The event calls for an end to intimate partner and sexual violence in the community and around the world.

This year’s theme is “Light Out of Darkness.” The event is open to everyone who wants to see an end to all forms of domestic and sexual violence.

When the marches arrive at the Bernie Milton Pavilion between 7 and 9 p.m., there will be a rally and candlelight vigil that will feature community speakers.

Disney announced the newest film in the Star Wars saga at its Star Wars Celebration event held from April 11 to 15. During the event, a team from Ithaca College — comprised of faculty, recent alumni and one current student — presented a panel at the event discussing its creation of a life-sized working replica of a robot from the film, BB-8.

For his senior project in communication management and design, Garrett Chin ’18 worked with Edward Schneider, associate professor in the Department of Strategic Communication, to build a life-sized working replica of the sphere-based robot BB-8 from the new Star Wars films.

The team from the college was invited to speak on a panel at the event to discuss its process and implications for robot building in STEM education. The project was headquartered in the Roy H. Park School of Communications’ Innovation Lab.

The message asked recipients to respond to a Gmail address if they were interested in a job that would supposedly pay a significant amount of money for dog sitting.

Information Technology quickly blocked communication between the college’s email system and the phishing Gmail address. IT also identified and notified the people who may have responded to the message.

IT warned students that they should always be extra suspicious of any unexpected emails or text messages that “sound too good to be true,” even if the referenced company or person seems recognizable.

IT said attackers are increasingly initiating multimessage conversations with victims to get them to lower their guards before asking them to do something risky.

The students will host a podcast launch briefing at 8:15 a.m. May 2 in Room 279 in Roy H. Park Hall to reflect on their experiences in interpreting the laws related to military housing issues and to discuss their podcast series.

Michael Twomey, retired Dana professor in the Department of English at Ithaca College, published the lead article in the spring 2019 issue of “Arthuriana,” the journal of the International Arthurian Society’s North American branch. Arthuriana focuses on the legend of King Arthur, a British leader in the late fifth and early sixth centuries. His article, titled “Retraction and the Making of Arthurian Texts,” presented a theory about how new texts narrating the legend of King Arthur have been composed.

Each new act of retraction left intact the existing canon of texts with the received plot and characters in the pseudo-history of King Arthur, thus enabling the continued expansion and renewal of Arthurian literature to the present day.

Twomey’s article began as a paper presented at the International Arthurian Congress in Würzburg, Germany, in July 2017, an event that he attended with support from the college.