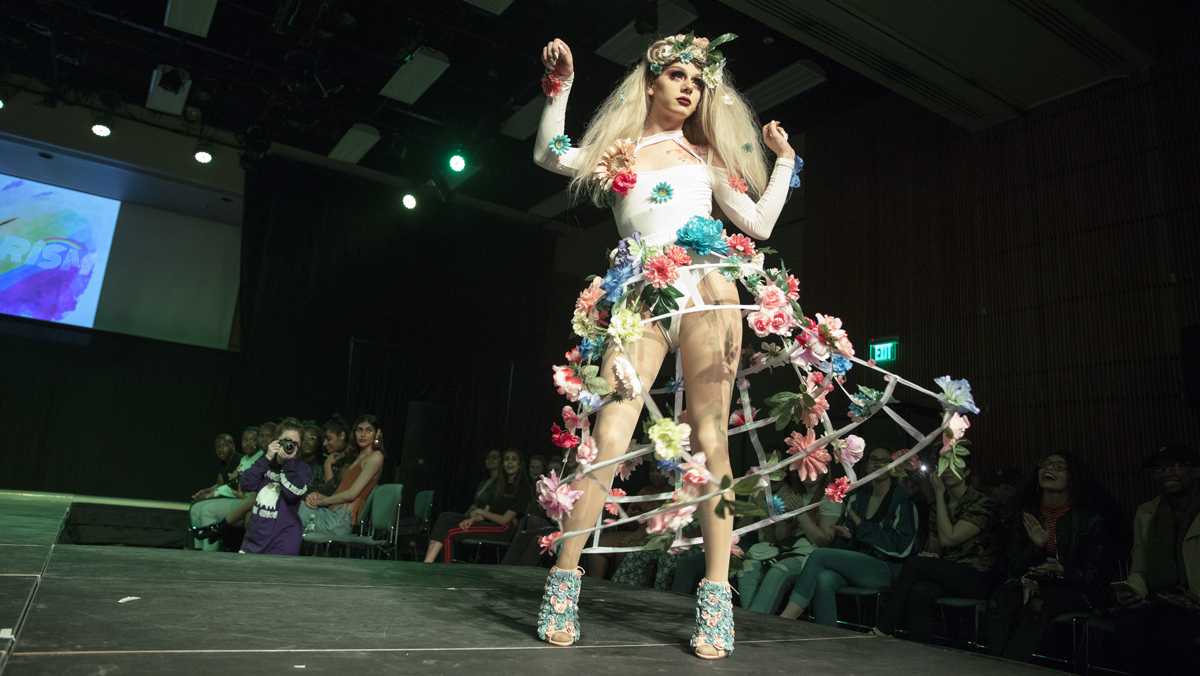 Connor Lange/The Ithacan
Drag performer Susan Katherine Barbara Leslie poses on the runway in the category “flower power” at the drag show fundraiser. All of the proceeds went to the Trans Justice Funding Project, which funds various grassroots projects for transgender people.
By The Ithacan
Published: April 2, 2019

Emeritus status is granted to retired faculty and administrators with outstanding professional achievements who have contributed significant service to the VSCS and meet certain criteria.

Williams was president of Lyndon State College — now Northern Vermont University-Lyndon — from 1989 to 1997.

“I had a terrific experience in the time I was at Lyndon State College, and I see this as a wonderful recognition of my time there,” she said.

Williams -— who has homes in Johnson, Vermont, and Fernie, British Columbia — is on the Vermont Public Radio board of directors and served on the Saint Michael’s College board
of trustees.

The Office of Religious and Spiritual Life at Ithaca College will host the exhibit “A Peace of My Mind,” a multimedia installation that uses photography and storytelling to engage diverse communities with the big questions of life. It is happening from April 1 to 4 in the Campus Center and Muller Chapel.

Photojournalist John Noltner will set up an on-site studio experience to take portraits of college students, staff and faculty.

At 5 p.m. April 4 in the Emerson Suites, college portraits will be revealed at Noltner’s public lecture, “The Road to Peace,” which lifts up ordinary people’s wisdom about hope, transformation and forgiveness.

The paper employs both spatial and gender theory in an exploration of the graphic novel El Fantasma de Gaudí. DiFrancesco studies public and open spaces in Barcelona, Spain, to examine the continued displacement of vulnerable populations in the wake of both the anti-austerity movement and Catalan nationalism.

College announces new award for outstanding faculty at the college

Ithaca College announced a new award for faculty made possible by a donation from Gloria Hobbs, honorary trustee of the college.

It will be presented to a faculty member who exemplifies Collado’s vision of excellence in education. Such excellence is demonstrated through an inclusive approach to educational practices of teaching, research and leadership. Sites of practice include the classroom, the campus and the community -— whether local
or global.

The award is intended to support the professional development of the chosen faculty member to further enhance their capacity for equitable and inclusive leadership in all relevant academic and community areas.

This award will be made available through the Center for Faculty Excellence. Faculty ranked associate professor or above, whether tenured or continuing contract, are eligible for
the award.

Park professor will be jury member in Young Ones student competition

This year’s students are tasked with developing advertising campaigns for clients including Avery Dennison, Brooks, Il Makiage, Budweiser, The New York Times, Burger King, Kraft and Dove Men+Care. Submissions are judged on creativity and originality. Winners will be invited to attend the Young Ones Education Festival from May 6 to 10 and will be awarded One
Show Pencils.

Elizabeth Medina-Gray, assistant professor in the Department of the Music Theory, History and Composition at Ithaca College, gave a presentation at the sixth annual North American Conference on Video Game Music on March 30 at the University of Hartford.

The paper she presented is part of a larger  research project examining reduced representations of voices in video games and the ways in which video game sounds can
sometimes act simultaneously as voice, sound effect and music.