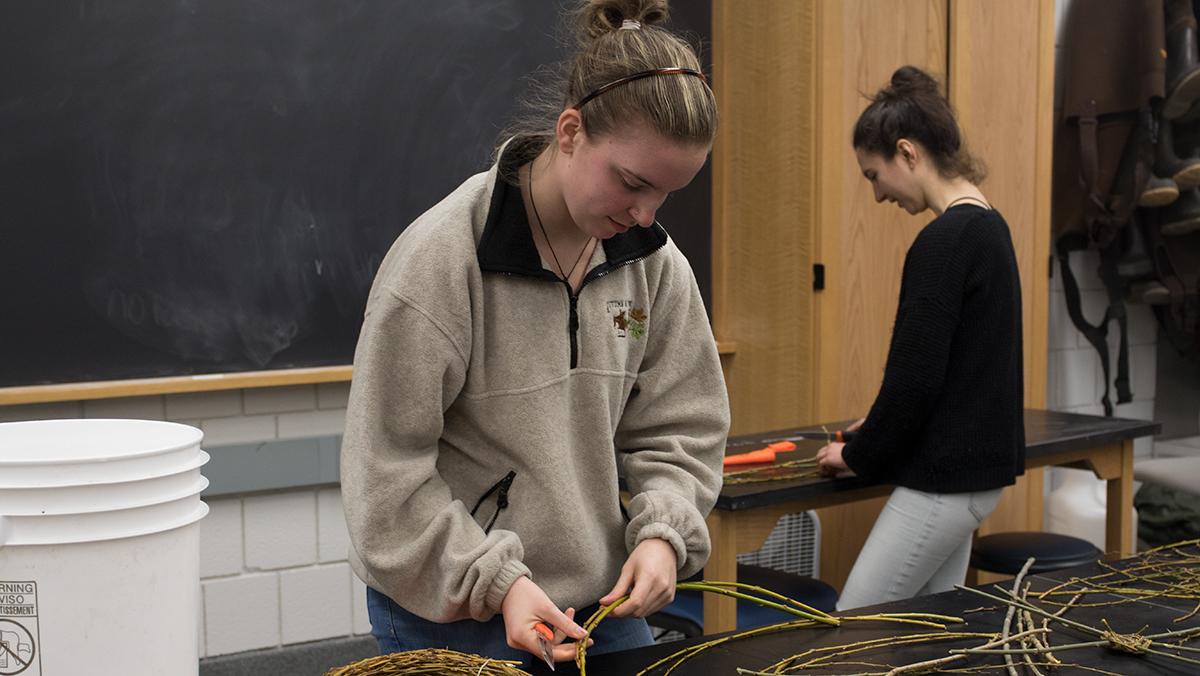 Sam Fuller/The Ithacan
Sophomore Kathryn White selects willow branches to weave into a basket during a willow basket–making event March 31 in the Center for Natural Sciences. The willow was gathered from around the Ithaca area, including some from the Ithaca College Natural Lands as well as other surrounding outdoor areas near the college.
By The Ithacan
Published: April 5, 2017

City of Ithaca warns against street parking during cleaning

The City of Ithaca began its annual street cleaning operations April 3, with streets on South Hill among the first on the schedule. The affected streets will be posted with “No Parking” signs 24 hours in advance of the cleaning. Cleaning will go through the first week in May, and while the work will be spread throughout the city during this time, South Hill streets will be targeted April 3, 6, 12, 17 and 28.

All vehicles remaining on the street after 7 a.m. will be ticketed and towed at the owner’s expense. The standard parking ticket can range from $15 to $30, and the towing rate in the City of Ithaca is $100 plus sales tax. Vehicle storage fees are $25 per day.

According to Julie Holcomb, clerk for the City of Ithaca, Cornell University and Ithaca College students make up a large percentage of the people who are towed during this four-week period.

SPO was established in 1980 to recognize excellence of those who study gerontology and aging, and the outstanding service of professionals who work with or on behalf of older persons.

Lucia Sacco was the community honoree and featured speaker at the event. Sacco is the executive director of Lifelong in Ithaca.

Fifty-two students from all five academic schools at Ithaca College have been selected to participate in the 2017 National Conference on Undergraduate Research from April 6 to 8 in Memphis, Tennessee,

Unlike meetings of academic professional organizations, NCUR is a gathering of young scholars and presenters from all institutions of higher learning and from all corners of the academic curriculum.

Through this annual conference, NCUR promotes undergraduate student achievement, provides models of effective research and scholarship and seeks to improve the state of undergraduate education.

Aidan Quigley, a junior journalism major, will assume the position of editor in chief of The Ithacan for the 2017–18 academic year.

Quigley was the only candidate interviewed by the Board of Publications at a public meeting April 3. At the board’s recommendation, Diane Gayeski, dean of the Roy H. Park School of Communications, appointed Quigley to the position.

Quigley started working for The Ithacan during his freshman year as a staff writer, and he has served on the editorial board as an assistant news editor, news editor and managing editor. He is currently spending the Spring 2017 semester in Washington, D.C., and interning at Politico as a breaking news intern.

Quigley’s other media experience includes interning at The Christian Science Monitor during  summer 2016. He plans to intern for Newsweek during summer 2017.

Those interested in participating can call 1-800-733-2767 or visit http://redcrossblood.org and enter Ithaca College to schedule a donation time.

Volunteers are also needed to assist at the registration table the day of both drives. Those interested can email csmith@ithaca.edu.

The Office of Public Safety and Emergency Management and the Office of the General Counsel are hosting two campus community forums to introduce the Ithaca College Body-Worn Camera Program. The forums will allow members of the community to have a discussion and ask questions prior to implementation, which is targeted for mid-April.

The first forum was held April 5, but one more forum will be held from noon to 1 p.m. Thursday in Room 3304 in the James K. Whalen Center for Music.

Additionally, campus community members who want to try out a body-worn camera can do so between 10 a.m. and 2 p.m. April 3–7 at the Public Safety Satellite Office.