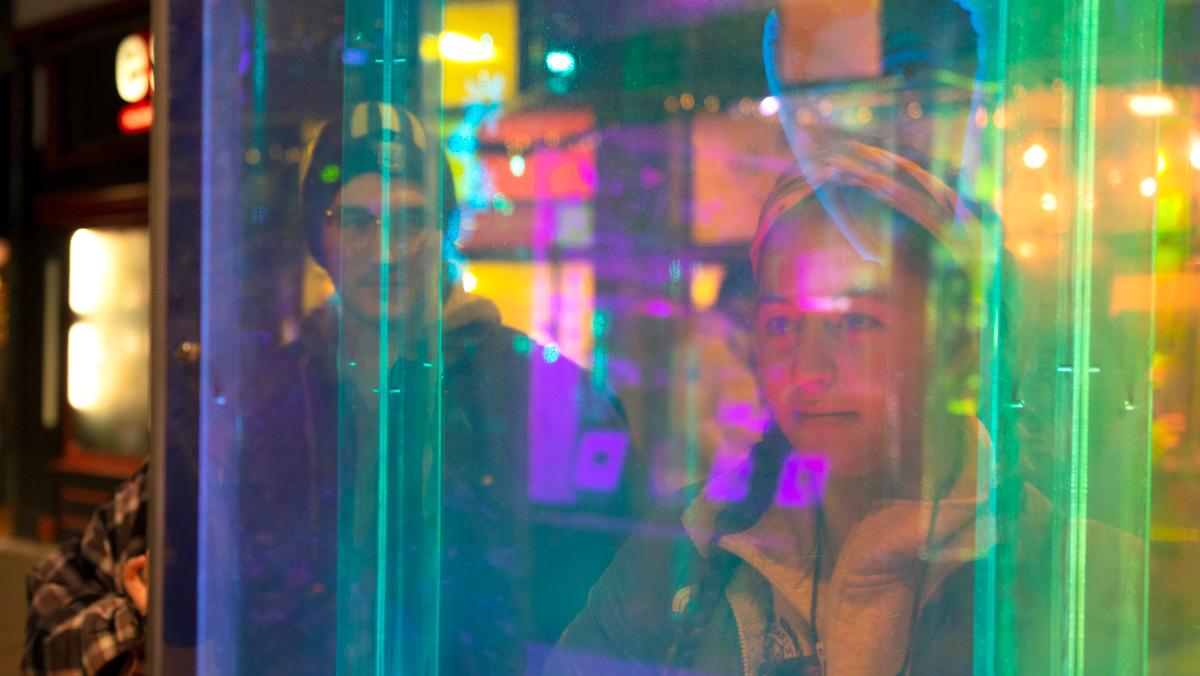 Eleanor Kay/The Ithacan
Freshmen Kendall Martin, Anna McCracken and Jay Tagliani admire the new Prismatica display on The Commons during the opening of the Winter Light Festival on Dec. 8. Pristmatica will be on The Commons until Dec. 15.
By The Ithacan
Published: December 11, 2019

Raul Palma, assistant professor in the Department of Writing, published his short story “Never Through Miami” in the Fall 2019 issue of The Greensboro Review.

The story was inspired by his 2017 research trip to Cuba.

In conversation with Roberto Quesada’s novel by the same, the story examines tensions between the Cuban enclave in Miami and Cubans in their home country, particularly those in the tourism sector.

The Ithaca College Center for Health Promotion has partnered with A Massage Station of Ithaca to bring chair massages to students.

Massages will be offered from noon to 3 p.m. Dec. 16 and 17 in the Center For Health Promotion on the lower level of Hammond Health Center.

The massages will cost $1 per minute and can be prepaid for through PayPal or credit card. Students can sign up for appointments for 10, 20 or 30 minutes of massage through the Center for Health Promotion website.

The documentary “With Infinite Hope: MLK and the Civil Rights Movement” was produced by  James Rada, associate professor and chair in the Department of Journalism,  with Chrissy
Guest and Maria Mejia Yepes, assistant
professors in the Department of Media Arts, Sciences and Studies.

The hour-long program has been nominated for The Midsouth Regional Emmy Awards, which are sponsored by the National Academy of Television Arts and Sciences.

“With Infinite Hope: MLK and The Civil Rights Movement”  is about the life, leadership and
legacy of  Martin Luther King, Jr.  through the eyes of 15 people who participated in some of the more notable events of the civil rights movement,  including the Montgomery Bus Boycott, the Freedom Rides, the Birmingham Children’s March, Selma and the Memphis Sanitation Workers Strike.

The documentary was produced in collaboration with Memphis PBS affiliate WKNO-TV.

To date, it has aired 468 times on 250 PBS/public-television stations, 72% of all PBS stations nationwide. The Midsouth Regional Awards Ceremony will take place in Nashville, Tennessee, Feb. 15.

Faculty members and students present at convention in Florida

Students, faculty, alumni and collaborators in the Ithaca College Department of Speech-Language Pathology and Audiology presented at the 2019 American Speech-Language-Hearing Association convention in Orlando, Florida.

The club would like to exceed its goal of collecting 75 units of blood, which is equivalent to approximately 94 appointments.

Appointments for the blood drive are required. Students, faculty and staff can sign up on the American Red Cross website.

Before coming to an appointment, the club recommends having a hearty breakfast or lunch and drinking more water than usual.

More information on the requirements and recommendations for donating blood can be found on the American Red Cross website.