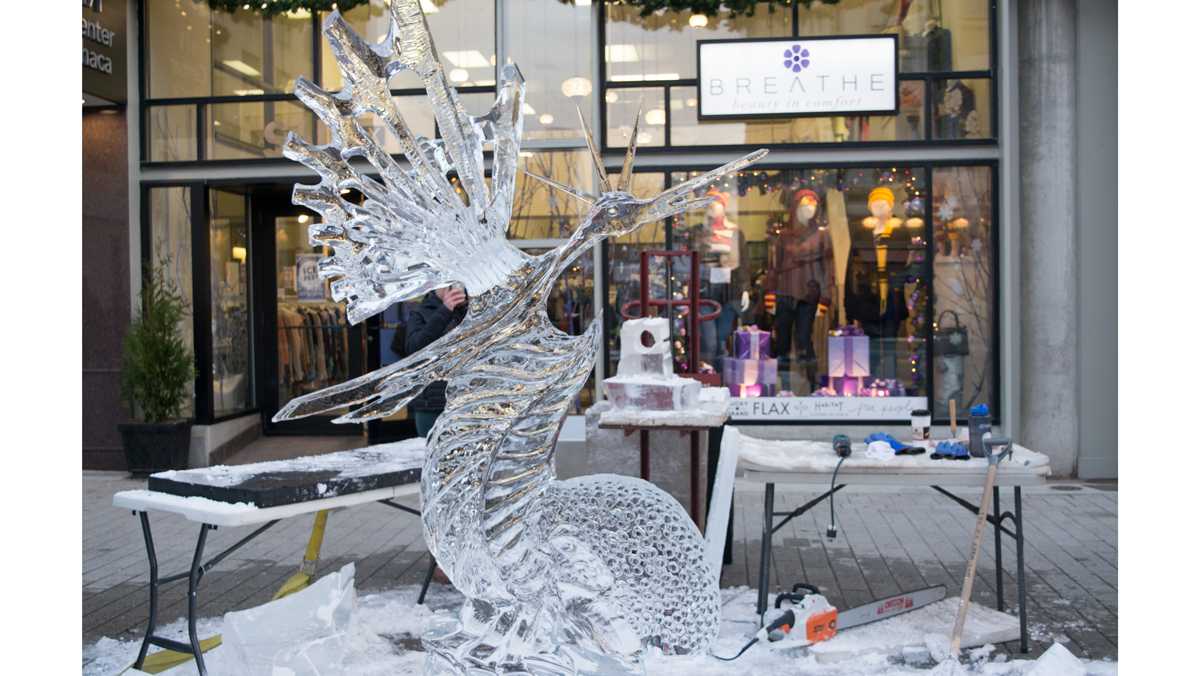 Ray Volkin/The Ithacan
The annual Downtown Ithaca Ice Festival and Chowder Cook-off were held on The Commons from Dec. 7 to 9. Ice carvers competed for $9,000 in prizes in speed-carving and carve-and-deliver competitions. Jerry Perron made this sculpture.
By The Ithacan
Published: December 13, 2017

Angela Rudert, lecturer in the Department of Philosophy and Religion, had a new book published in September titled “Shakti’s New Voice: Guru Devotion in a Woman-Led Spiritual Movement.” The book is the first comprehensive study of Anandmurti Gurumaa, a widely popular contemporary female guru from north India known for offering spiritual teachings and music on satellite television and the internet.

The book discusses Gurumaa’s religious pluralism, her gender activism and her embrace of new media, in order to illuminate elements of continuity and change within the time-honored South Asian tradition of guru-bhakti, devotion to the guru. Gurumaa speaks strongly, and often harshly, about contemporary issues of gender inequality. She created an organization to promote girls’ education in India.

Patricia Zimmermann, professor in the Department of Media Arts, Sciences and Studies and co-director of the Finger Lakes Environmental Film Festival, published a chapter in the recent book “Asian Video Cultures:  In the Penumbra of the Global.”

Her chapter is entitled “EngageMedia:  The Gado Gado Tactics of New Social Media in Indonesia.” The chapter analyzes EngageMedia, an environmental and human rights social media portal engaging the Asia-Pacific region. Zimmermann discusses the dissemination of accessible media technologies, the opening of social media, the closing down of commercial media through regulation and the need for distribution of works produced across disparate locations and languages in Southeast Asia.

The Ithaca College Library will be holding events to help students cope with the stress of preparing for final exams. The library is offering multiple events for relieving stress throughout the week.

Throughout the week, there will be a coloring station at the periodical unit on the main floor. Pencils and crayons will be available at the main circulation desk, and students can share their work with the #ICLibArt hashtag.

Senior Katherine Helly is the recipient of the Kent Scriber Scholarship for 2018.

The annual award is named after Kent Scriber, professor  emeritus in the Department of Exercise and Sport Sciences. The award recognizes an outstanding junior or senior athletic training major from all accredited athletic training programs in New York, New Jersey, Pennsylvania and Delaware.

The award of $3,000 and a plaque will be presented to Helly on Jan. 6. Helly will attend the 2018 Eastern Athletic Trainers’ Association Awards Banquet in Boston, Massachusetts. The award is highly competitive and recognizes Helly’s scholarship, professional development and academic accomplishments to date.

The Society for Neuroscience conference is the largest international gathering of neuroscientists in the world.

David Turkon, associate professor in the Department of Anthropology, recently was a part of the panel presentation, “Understanding Holistic Healing: Case Studies of Medical Pluralism Throughout Africa,” at the 116th annual meeting of the American Anthropological Association in Washington, D.C.

Turkon’s paper, “Modernity, Tradition, and Practices of Healing in Mokhotlong, Lesotho, 1990-1991,” drew on observations from his early research in Lesotho to explore relationships between Western doctors and traditional
healers. He demonstrated that archetypal symbols can sometimes be drawn on to formulate approaches to health and well-being.