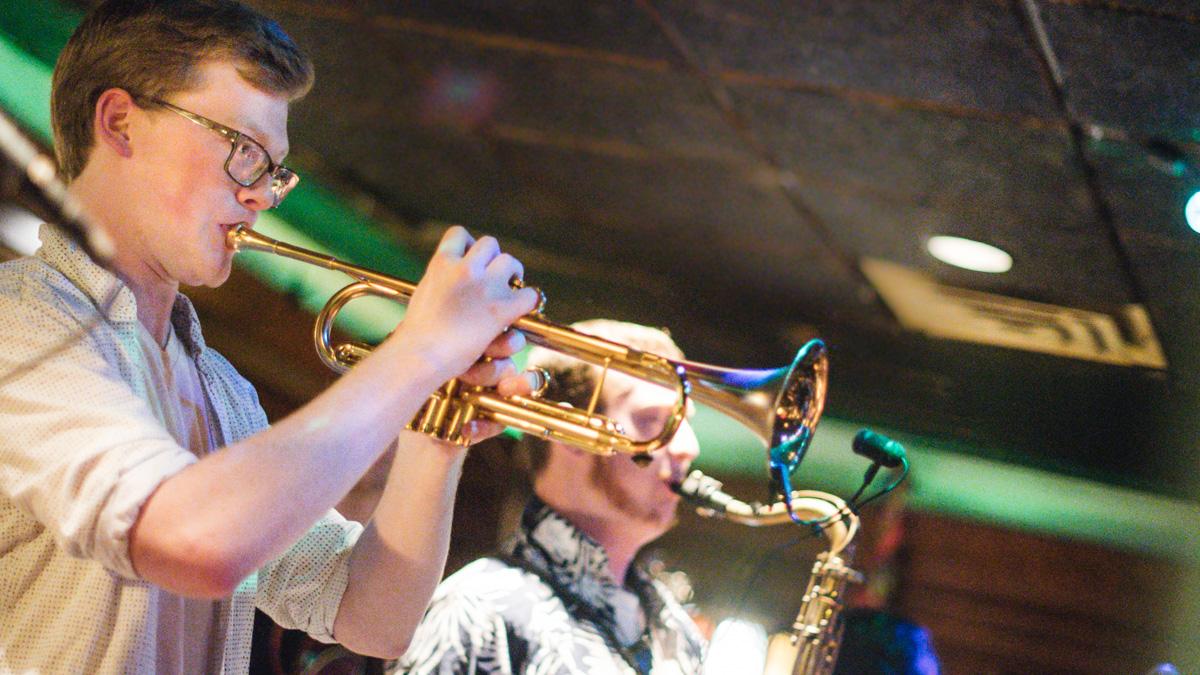 Kristen Harrison/The Ithacan
From left, junior Dan Yapp plays the trumpet while performing in his band, Butter, for its EP release show Feb. 16 at Sacred Root Kava Lounge and Tea Bar. The band plays funk music and is composed of current Ithaca College students and alumni.
By The Ithacan
Published: February 20, 2019

Ithaca College will be hosting an open house from 2 to 4 p.m. Feb. 25 in the Campus Center. During the open house, attendees will be able to tour all the offices and services in the center. All students, faculty and employees are encouraged to attend.

One of the stops in the center will be the new food pantry. If attendees bring an item to donate to the pantry, they will be able to spin a prize wheel to get an additional prize. The food pantry is in need of cereal, pasta, nut butters, instant oatmeal, fruit juices, condiments, spices
and personal care items.

The award is meant to recognize staff members who are actively involved with the college’s community and who have gone above and beyond their regular work duties. The committee will begin accepting employee recognition nominations for Spring 2019 by mid-February.

Ithaca College’s WICB Sports, one of the radio stations that broadcasts out of the Roy H. Park School of Communications, has been recognized by the Broadcast Education Association (BEA) at its annual Festival of Media Arts Awards Competition. WICB Sports was applauded for its coverage of the 2018 Ithaca College football season.

WICB Sports’ winning submission was written, produced and voiced by senior Cam Pratt, the station’s sports director. The submission was approximately five minutes long and originally aired during the Cortaca Jug football game in Fall 2018. His broadcast included sound bites, notes from each team, stats and an open narrative.

Ithaca College is offering free tax consultation and preparation for students who earned an income less than $55,000 in 2018. The Volunteer Income Tax Assistance (VITA) program is available on Mondays from 1 to 3:30 p.m., Tuesdays from 10 a.m. to 1 p.m. and Thursdays from 2:30 p.m. to 5:30 p.m. and is run out of the School of Business.

The clinic asks that students bring a current driver’s license or other photo identification and that students check if they are being claimed as a dependent on their parents’ tax returns. Students can email ithacacollegevita@gmail.com to make an appointment. International students can email internationalvita@gmail.com to make an appointment.

Cinemapolis in downtown Ithaca will feature  the student- and faculty-made film “With Infinite Hope: MLK and The Civil Rights Movement” and will end the feature with a Q&A  session with the filmmakers at 7 p.m. Feb. 21.

The documentary aired over 300 times on more than 75 public television stations in the United States and focuses on the life of Martin Luther King Jr. The film also looks at many
of the important events surrounding the civil rights movement, like the Freedom Rides and the Memphis, Tennessee, sanitation workers’ strike. The documentary was directed by James Rada, associate professor and chair of the Department of Journalism, and co-produced by Rada and Chrissy Guest, assistant professor in the Department of Journalism.

All community members with an interest in the history of the civil rights movement, oral history and documentary production are encouraged to attend.

Professor pens chapter in book about communication in neuroscience

Patrick McKeon, associate professor in the Department of Exercise and Sport Sciences, had a chapter he wrote published in the textbook “Neuroscience Fundamentals for Communication Sciences & Disorders.” It is the 12th chapter in the book and is titled “Introduction to Motor Learning and Control Principles of Behavior.”