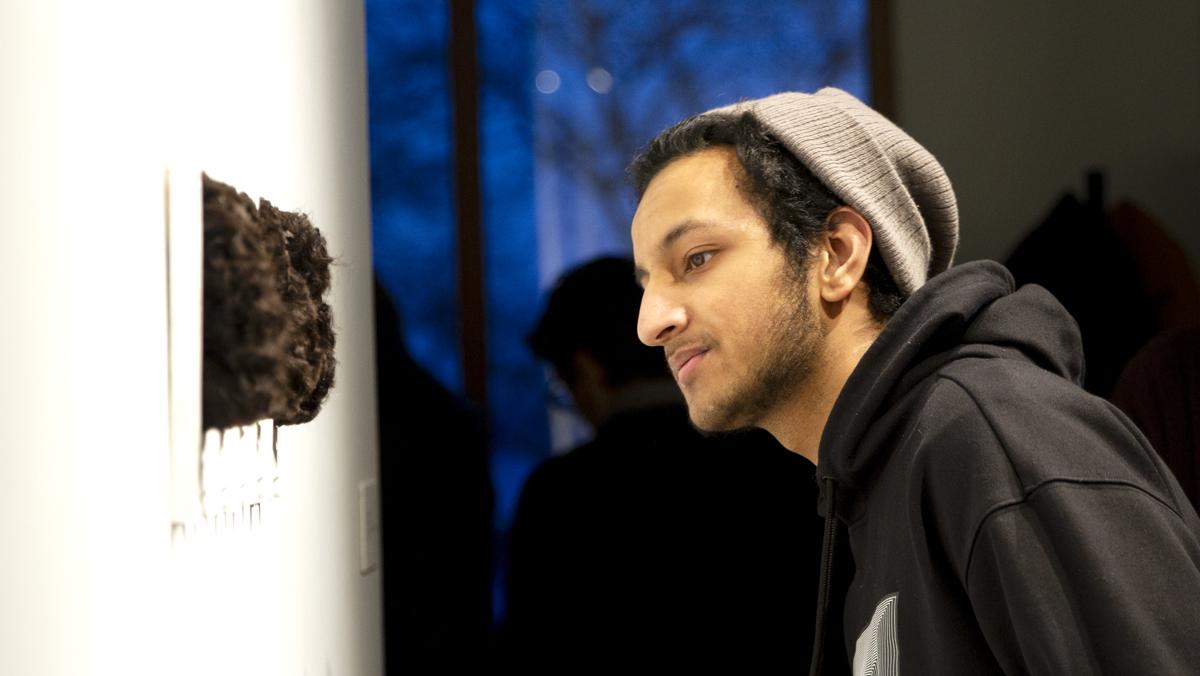 Kristen Harrison/The Ithacan
Sophomore Akesh Patel admires a piece from the exhibition, “Process,” which focuses on the different approaches behind art. The gallery opened its doors to welcome the Ithaca College community to its show, curated by Jeffreen Hayes, from 5 to 7 p.m. Jan. 31.
By The Ithacan
Published: February 6, 2019

Senior Grant Brighter published his honors thesis in the journal “Frontiers in Human Neuroscience” alongside his faculty mentor Nancy Rader, professor in the Department of Psychology.

The study is titled “Establishing Shot Type Affects Arousal and Cognitive Load During Transitions Between Novel Interior Locations in Films,” and it investigates how effective four types of camera shots are at helping viewers process location shifts. The study used a brain imaging modality called functional near-infrared spectroscopy and eye-tracking technology, which helped assess cognitive workload and arousal in response to editing techniques in films.

Recreation and leisure professor appointed to chair of committee

Janice Elich Monroe, professor and chair of the Department of Recreation and Leisure Studies, has been appointed chair of the Scholarship Committee of the National Council for Therapeutic Recreation Certification.

The committee is tasked with providing academic scholarships to people who are becoming certification-eligible, will be pursuing areas of specialization, progressing toward an advanced degree in therapeutic recreation or simply are wanting to enhance their knowledge base to provide quality care.

Ithaca College’s Food Insecurity Committee is seeking help from the campus community to help fill an on-campus food pantry with supplies. The new food pantry will be located in the DeMotte Room in the Campus Center,  and it is expected to open around the second week of February.

The committee is developing a plan that   allows for individual financial contributions,  but for now it is asking for the items listed above.

Angela Kramer, Circle Apartments community director in the Office of Residential Life, has been promoted to the coordinator of residential facilities position as of Feb 4.

Kramer graduated from Ithaca College in 2013 and served as a resident assistant while a student at the college. She returned to the college as a residence director in 2016 and focused on aspects of operations and facilities.

Christopher Brittingham will be covering Kramer’s previous position for the rest of Spring 2019.

Jason Corwin, a leader from the Seneca Nation, will be hosting a screening of the documentary “Defending Ohi:yo’” and other short videos at 6 p.m. Feb. 21 in the Handwerker Gallery. The films will focus on Seneca environmental topics.

Corwin found out about a proposed plan to process fracking wastewater and discharge the waste into the waters of the Allegheny River, also known as the Ohi:yo’ in the Seneca Nation. The river flows directly through the Seneca territory.

Corwin is the executive director of  the Seneca Media and Communications Center in the Seneca Nation and has worked extensively as a community-based media
and environmental educator.

Senior Hayley Kretchmer has arranged for a charter bus to take students to Syracuse Mall  Destiny USA. The Division of Student Affairs and Campus Life is sponsoring the trip, and there is no charge for students who want to take the charter bus.

The bus will leave at 10 a.m. Feb. 9 and return at 6 p.m. the same day. To take the bus,  students can fill out a form on IC Engage under “Bus Trip to Destiny USA (Syracuse Mall).” Seats were filled in the order in which forms were received. Students who filled out the form would have received an email by Feb. 6 to inform them if they are on the trip or on the waitlist.

Rachel Paparone, assistant professor in the Department of Modern Languages and Literatures, has been awarded the CAITY Caucus Award at the 2018 meeting of the Northeast Modern Language Association. Her paper is titled “A(r)cadie heureuse? Space, Place, and Engaged Pastoral in Zachary Richard’s Feu.”