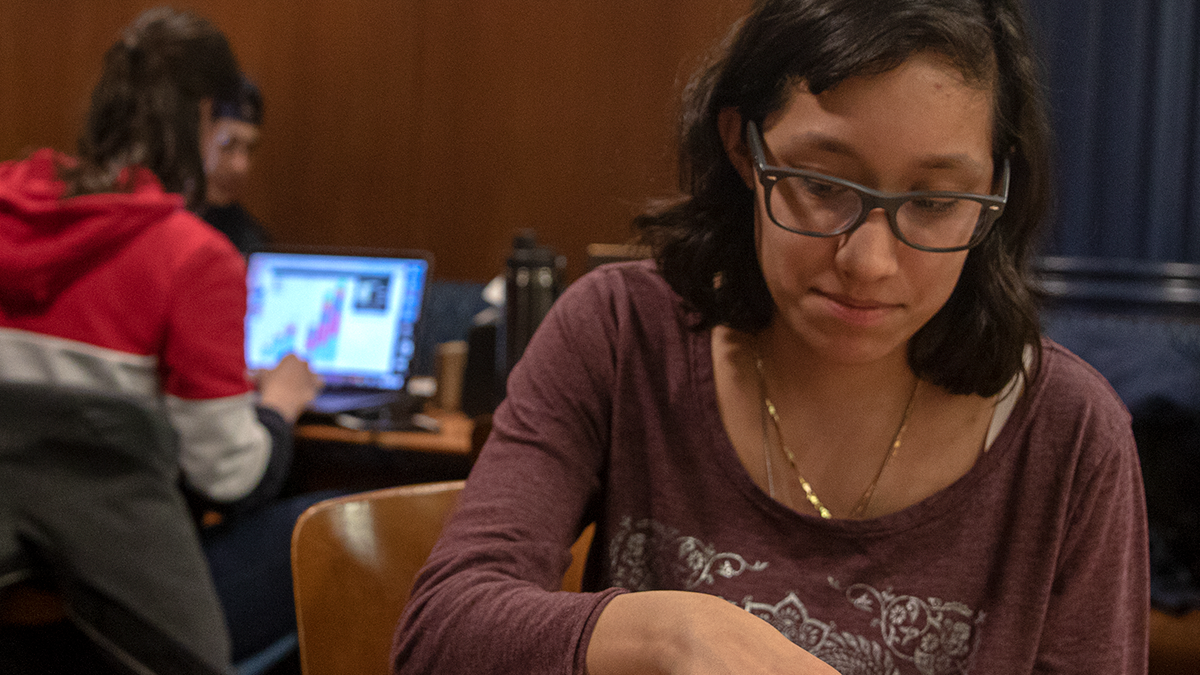 Jackie Marusiak/The Ithacan
Freshman Helen Reyes plays bingo at the Campus Center Bingo Night on March 18. The event is new and will take place every Monday for the rest of the semester. The event series will feature prizes including cash, gift cards and more.
By The Ithacan
Published: March 19, 2019

The Ithacan was honored by the Columbia Scholastic Press Association on March 8, when it was presented with a Silver Crown Award at the 2019 College Media Convention at the Marriott Marquis Hotel in New York City.

The Crown Awards, first presented in 1982, are the CSPA’s highest recognition of overall excellence. This year’s award was for work produced during the 2017–18 academic year
under former Editor-in-Chief Aidan Quigley ’18.

In addition, The Ithacan took the second-place Apple Award for Best Newspaper at the conference’s annual Best in Show competition. The CSPA was founded in 1925 and is owned by Columbia University.

Professor presents on her film about India-Pakistan Partition

Kathleen Mulligan, associate professor in the Department of Theatre Arts, and her husband, David Studwell, were guest speakers at the The Indian Subcontinent Partition Documentation Project, Inc. on March 9 in New York City.

Mulligan and Studwell screened their film, which documents their project, “This Stained Dawn: Voices of Partition,” an original theater piece based on interviews with survivors of the 1947 partition of India and Pakistan. “This Stained Dawn: Voices of Partition” was a collaboration among Mulligan, Studwell, Sarah Morrisette ’13 and Theatre Wallay in Islamabad, Pakistan. The film was supported by the U.S. Embassy in Islamabad, The Fulbright Specialist Program and Ithaca College.

Peyi Soyinka-Airewele, professor and chair of the Department of Politics, has been invited to participate in a panel event at the United Nations headquarters in New York City, alongside three other panelists.

The panel will focus on the international response to Boko Haram and explore how the UN and the international community could play a more effective role in efforts against Boko Haram’s mass abductions and gender-based violence. The event will be moderated by the co-founder of the “Bring Back Our Girls” movement, Aisha Muhammed-Oyebode, and it serves as a precursor to the annual UN Commission for the Status of Women event series. The panel event will focus on female empowerment and the UN’s wider commitment to the Women, Peace and Security agenda.

Catholic Community to host retreat with the Sisters of St. Joseph in April

The Catholic Community is offering a weekend service retreat with the Sisters of
St. Joseph in Rochester, New York. Participants will travel to Rochester on April 5 and participate in a day of service and reflection April 6. Students will return 12:30 p.m. April 7. Transportation to and from Rochester will be provided. There is a $30 registration fee.

Professor directs Dallas play and gets praised by TheaterJones

Wendy Dann, associate professor in the Department of Theatre Arts, directed the Dallas Theater Center’s production of Sarah DeLappe’s “The Wolves.” The Dallas Theater Center won the 2017 Tony Award for Best Regional Theatre. Dann directed “Constellations” in that award-winning season, and “The Wolves” was a finalist for the 2017 Pulitzer Prize in Drama. TheaterJones, a newspaper that reviews plays, said it was “fierce” and “game-changing.”

Google has recently announced a serious security vulnerability with Chrome on all platforms including Mac, Windows and mobile devices. Though many devices will automatically update, the college recommends that students and faculty ensure they are running Chrome 72.0.3626.121 or higher. The college began pushing the update out to its Mac computers March 14. Most Windows computers update automatically.

The Teaching and Learning with Technology team announced all Ithaca College faculty, staff and students will have access to LinkedIn Learning, an on-demand learning solution designed to help individuals gain new skills and advance their careers.

The Handwerker Gallery opened two new exhibitions March 20: “Get Real: Seeking Authenticity in African Art,” a student-curated exhibition of works from Africa, and “The Protest Banner Lending Library” by Aram Han Sifuentes. In her work, Sifuentes uses
a needle and thread as tools to examine immigration, citizenship, race and craft. Seniors Yarra Berger, Anna Gardner and Suzanne Tang  created “Get Real: Seeking Authenticity in African Art.” In their exhibit, they seek to unpack societal associations of truth with originality as they relate to Africa and the art world as a whole.

There will also be a public celebration for the exhibits from 5 to 7 p.m. March 21. Both exhibits will be on display until April 19.