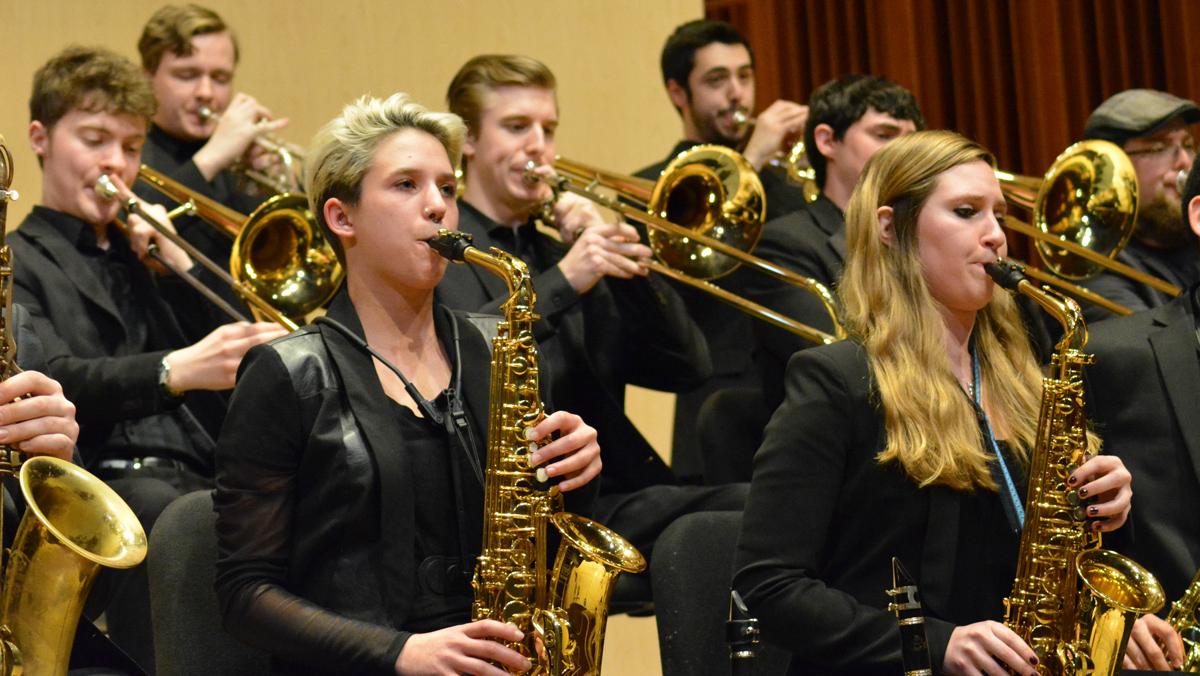 Ray Volken/The Ithacan
The Ithaca College Jazz Ensemble plays the music of jazz artist Thelonious Monk on March 4 in Ford Hall. The ensemble performed the concert entirely as “head charts,” or music learned by ear and performed without the aid of written sheet music.
By The Ithacan
Published: March 7, 2018

Degree candidate to discuss power of healing from distress

Gregory Mitchell, a Master of Arts degree candidate in Ethnic Studies at San Francisco State University, will be discussing transforming pain into power on March 8 at 6 p.m. in
Klingenstein Lounge.

The discussion is titled Honoring Ourselves through Healing: Transforming our Pain into our Power. Mitchell will discuss how building a more equitable and just world will take
commitment to healing individually from
emotional distress.

Mitchell’s personal experiences with gun violence and the prison-industrial complex led to both his personal journey of healing as well as his professional pursuits as a mindfulness instructor and residential counselor in incarcerated settings, continuation high schools and community-based organizations.

The discussion is part of the Center for the Study of Culture, Race and Ethnicity’s
discussion series.

The organization works with schools to provide assessments of student achievement and
instructional services for prekindergarten through 12th grade. Rochon assumed the position on Jan. 1 from former ERB president
Dave Clune.

Staff members give presentation about diversity in career services

Their presentation, The Critical Need and Power of Diversity, Equity, and Inclusion in Higher Education Career Services, discussed the need for diverse, interdisciplinary and socially just solutions in higher education and career services. They also discussed the importance of efforts to diligently include, engage and empower students from all demographics,
identities and paths of life in their career development.

The conference, Public Music Discourse: In Honor of the Bernstein Centenary, was held at the University of South Carolina. The purpose of the conference was to bring together music theorists, musicologists, ethnomusicologists, composers, performers, music educators and many others to talk about public engagement in various musical topics.

Johnson’s presentation, A Music Theorist in the Baseball Hall of Fame? Talking Music to Baseball Enthusiasts, discussed how to present research and analytical listening of the music of baseball to nonspecialists.

Maggie Butler ’17 and Jennifer Muller, associate professor and assistant chair in the Department of Anthropology, have co-authored an article entitled “At the Intersections of Race, Poverty, Gender, and Science: A Museum Mortuary for Twentieth Century Fetuses and Infants.” The article was published in January and discusses the John Hopkins Fetal Collection, housed at the Cleveland Museum of Natural History.

The article focuses on the biopolitics of the “museum mortuary” — the postmortem context for those who have been dissected, macerated and collected. Specifically, the piece addresses the acquisition, commodification and subsequent collection of fetal and infant remains by the United States historical medical system as a form of structural violence. Women of color and impoverished women were often denied agentive decisions regarding terminated pregnancies, miscarriages and deceased offspring.

Butler is currently a Ph.D. student in the Department of Anthropology at Northwestern University.

Dan Breen, associate professor and chair in the Department of English, has been awarded the Gerald R. Rubio Prize by the International Sidney Society for his article “Redeeming the Sonnet Sequence: Desire and Repentance in Caelica.”

The award is given annually for the year’s best essay in the Sidney Society’s academic publication Sidney Journal.