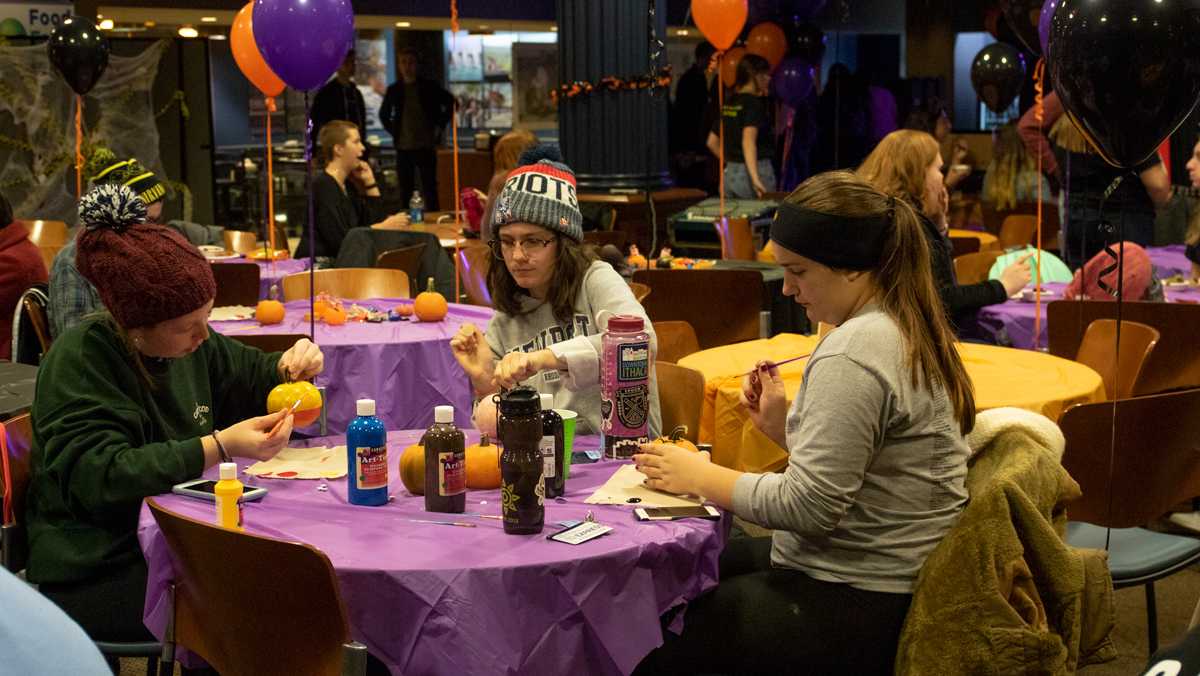 Maxine Hansford/The Ithacan
From left, freshmen Lauren Barnes, Keeley Firinne and Zoey Spang decorate pumpkins Oct. 26. IC After Dark and the Student Activities Board hosted a Halloween-themed event, “Ith’s A Great Pumpkin!,” with a pumpkin painting and a costume contest.
By The Ithacan
Published: November 7, 2018

In response to a growing concern about fake news and the power of media, Chris Sperry, director of curriculum and staff development for Project Look Sharp at Ithaca College, served as a guest editor in the September 2018 issue of Social Education.

The publication is a national peer-reviewed journal curated by the National Council for the Social Studies, which provides educators with resources on technology, educational media reviews and social studies research.

Through the 10 articles Sperry curated in the special section of the journal, the case was strongly made for why knowing facts is no longer enough. In his opening article, Sperry said learners must also be able to reflect on how their own biases impact their interpretations of the media.

Sox Sperry, Project Look Sharp’s curriculum writer, also contributed an article titled “There’s Nothing New About ‘Fake News,’” which dives into how teachers can make use of analytical tools to explore the process of omission, fabrication and distortion in media. His piece draws on his long-standing role as an educator and developer of media-based history lessons.

The Society for Human Resource Management, which is the largest global human resources membership association, posted an article written by Delphia Howze, director of employee relations and development at
Ithaca College.

The article is titled “Creating a Safe Space for Inclusive Dialogue” and explains how readers can aid in setting the stage for productive discussions on the topic of diversity and inclusion.

The IT Information Security team has received several reports of an email phishing scheme related to iTunes gift cards.

The messages seen have come from external email accounts at Gmail, Yahoo and other services but show the sender as the name of an Ithaca College employee, generally a manager. They have subjects along the lines of “urgent request,” “Hi <recipient-name>” or “quick favor,” with an initial message, something like “Are you available? I need you to do something for me urgently. I’m in a meeting and won’t be able to talk on the phone.”

The initial message is vague, in an attempt to start a dialogue to get the victim’s guard down before specifying the nature of their request.

If they get a response, the attackers then ask the victim to buy a few hundred dollars worth of iTunes gift cards.

Either in the same email or in a follow-up message they ask the victim to scratch the cards to reveal the redemption code and then send them pictures of the cards showing the code.

There will be a screening of the new documentary film, “UNFRACTURED,” by feminist filmmaker, Chanda Chevannes, 7 p.m. Nov. 2 in the Roy H. Park School of Communications auditorium.

There will be introductory remarks by Sandra Steingraber, distinguished scholar in residence in the Department of Environmental Studies and Sciences.

There will also be a Q&A with Chevannes after the screening. Premiering in Ithaca last spring as part of the Finger Lakes Environmental Film Festival, “UNFRACTURED” is a documentary about using data to stand up
to power.

The story follows introspective biologist Steingraber as she uses science in the service of social change and reinvents herself along the way. Steingraber quickly emerges as a leader of New York’s biggest grassroots movement in decades as it fights for a statewide ban on fracking. This screening will be preceded by a short presentation.

Ithaca College is accepting applications for a three-year appointment as director of the Integrative Core Curriculum, with the possibility of reappointment.

The person in this position will provide leadership in the ongoing implementation, revision and assessment of the ICC, serve as liaison to the Committee for College-Wide Requirements, advance the electronic learning portfolio and work collaboratively with the Ithaca seminar coordinator and faculty and staff across campus.

The individual selected will also lead implementation of the action plan resulting from the current ICC program review.

Neapolitan to extend its hours until Thanksgiving break begins

Neapolitan, located in IC Square, is extending its hours on a trial basis from now until Thanksgiving break. Neapolitan is open weekdays from 7:30 a.m. to 11:00 p.m.