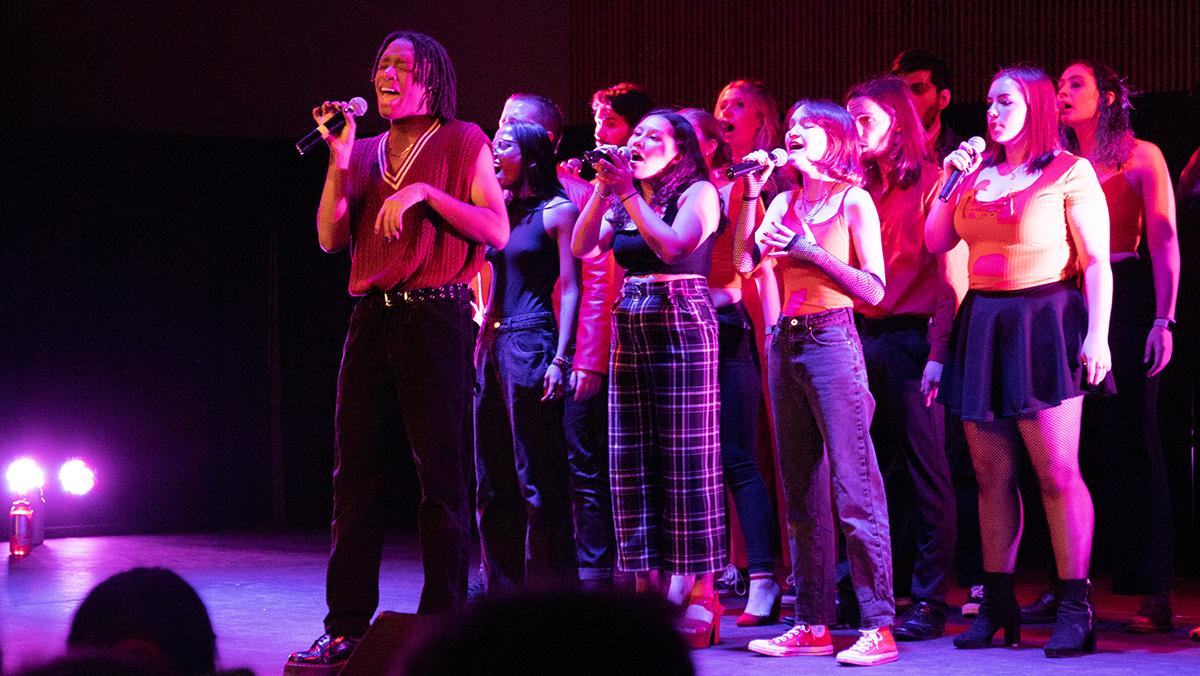 Kalysta Donaghy-Robinson/The Ithacan
Junior Ty Benners leads other members of the a cappella group Voice Stream in a performance of Hozier’s “Movement” on Oct. 29 in Emerson Suites. The group performs two concerts per semester and is an all inclusive coed group.
By The Ithacan
Published: November 22, 2022

The college is offering a new four-credit course for students to learn about the Finger Lakes Environmental Film Festival (FLEFF) and the history of film festivals. The class will be held Wednesdays from 6:50 to 10:10 p.m. during Spring 2023. Participants will learn about the history, programming and creation of festivals like FLEFF by observing screenings, filmmakers, activists, artists and scholars. The semester-long course is co-taught by three professors: Andrew Utterson, associate professor in the Department of Media Arts, Sciences and Studies and associate programmer of FLEFF; Brett Bossard, executive director for the Office of Alumni and Family Engagement, former executive director of Cinemapolis and associate programmer of FLEFF; and Rachel Schaff, assistant professor of media studies at Mercer University and associate producer of FLEFF. FLEFF is currently in its 26th year of running, making it the second oldest environmental film festival in the United States. The first oldest is Washington D.C.’s Environmental Film Festival, which began in 1993.

Virtual and in-person All Staff Meeting will be hosted Nov. 7

The All Staff Meeting for college staff is scheduled to be held from 1 to 2 p.m. Nov. 7 in Emerson Suites. There will also be a livestream link so staff can attend the meeting virtually. The livestream link will be shared via email with staff members before the event. Those with disabilities who require accommodations to attend should contact Lynn Hyde, executive assistant in the Office of Human Resources and Planning, at lhyde@ithaca.edu as soon as possible.

IC Unbound Dance Co., Pulse Hip Hop, Island Fusion, Katalyst K-Pop, Tap Club, Ground Up Crew, IC Defy Dance Co. and Ballroom Club are hosting the first event collaboration among all campus dance companies. All proceeds raised from the event are being donated to Ballet & Books — a non-profit that works to improve children’s literacy skills through hybrid dance and reading practice. The dance performance for charity will be from 6 to 9 p.m. Nov. 4 in Emerson Suites. During the first hour there will be food, games and fundraising activities followed by a two-hour performance. Those who are interested in attending can reserve their ticket by visiting the Campus Center between 11 a.m. and 2 p.m. during the week. The dance companies also encourage additional donations for Ballet & Books with each ticket reserved.

Alum scheduled to give a lecture on attitudes toward prostitution

A presentation titled “From Vixens to Victims: Prostitution and Charity in Early Modern Ireland” will be given by Karen Sonnelitter ’03, associate professor of history at Siena College, from noon to 2 p.m. Nov. 4 in Clark Lounge. The lecture will address how attitudes toward prostitution have changed since the founding of the Dublin Magdalene Asylum in 1767 — a charity with the goal of rehabilitating prostitutes. In the early eighteenth century, prostitutes were seen in an extremely negative light. Sonnelitter will analyze through her presentation why the shift in perspective happened and the history of the Dublin Magdalene Asylum. Sonnelitter has written the books “Charity Movements in Eighteenth-Century Ireland: Philanthropy and Improvement” (2016) and “The Great Irish Famine: A History in Documents” (2018), and she is currently working on her newest book “Irish-English Relations: A History in Documents.” Anyone interested in attending the presentation who requires accommodations should contact Jonathan Ablard, professor in the Department of History, at jablard@ithaca.edu or 607-274-3558.

College awarded for broadcasts in audio and video categories