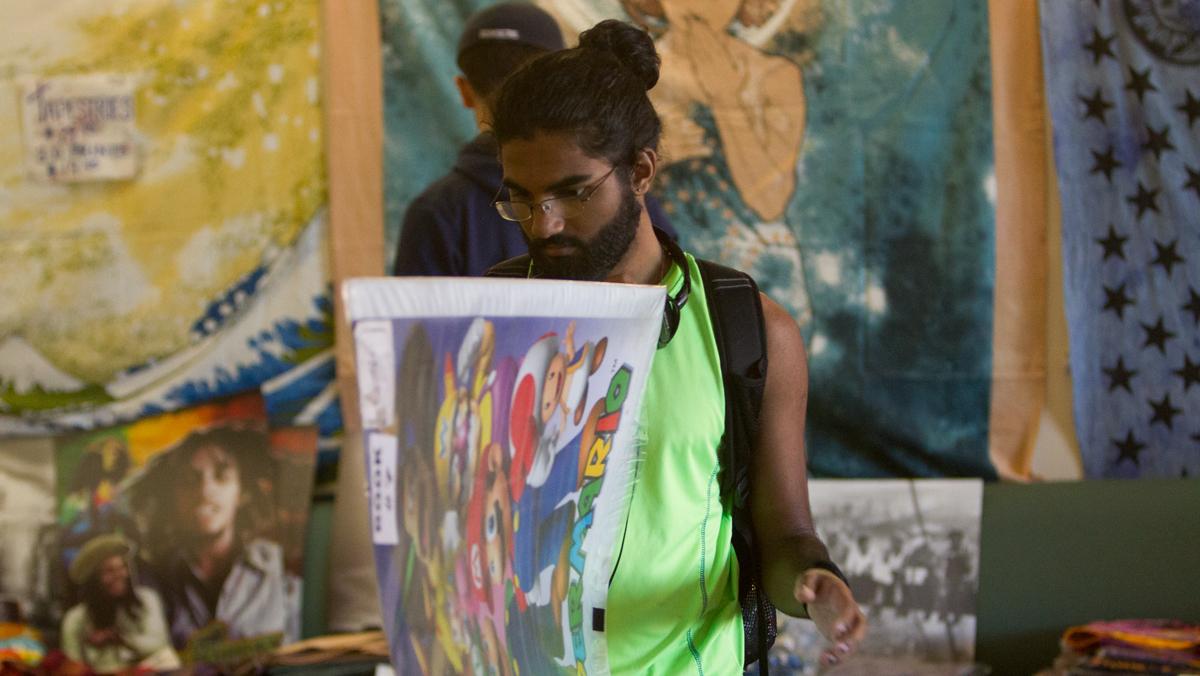 Maxine Hansford/ The Ithacan
Sophomore Varun Koppikar shops at the pop-up poster sale run by Beyond the Wall Poster and Prints outside Emerson Suites on Oct. 2. Part of the proceeds from the sale will be used as a fundraiser for the Ithaca College varsity baseball team.
By The Ithacan
Published: October 4, 2017

The Studio at Ithaca College will be hosting Brooke Johnson, former Food Network president, for a moderated Q&A with audience discussion and networking.

The discussion will take place in the downtown studio, located at 171 East State Street, from 4 to 6 p.m. Oct. 5. Guests can ask questions, informally pitch food media ideas and talk about food. The event will be an informal discussion setting, and guests are invited to stay as long as they are able to. The moderated Q&A session will be held from 4 to 5 p.m., and the open networking reception, with refreshments, will be held from 5 to 6 p.m.

Cruz, a Park Scholar at the school, orchestrated the relief initiative and is working with other organizations on campus and other students in the Park Scholar program to support victims.  They are  collaborating  with Cornell University’s Puerto Rican Students’ Association.

Following her 2013 BBC Proms debut performance of Matthias Pintscher’s “Chutes d’étoiles” with the BBC Scottish Symphony, Helseth has established herself as a leading
trumpet soloist, gathering critical acclaim for her music.

This concert series is funded by a grant from the Robert G. Boehmler Community Foundation. Boehmler, who received a bachelor’s degree from the Ithaca College School of Music in 1938 and a master’s degree in 1961, was a musician and educator who established the foundation to support education in the communities in which he lived.

The image-text book “In Most Tides An Island” by Nicholas Muellner, associate professor in the Department of Media Arts, Sciences and Studies, has been named one of 10 books shortlisted for the Paris-Aperture Foundation Photobook of the Year award.

Muellner’s book is a glimpse of contemporary post-Soviet queer life. The book has also been selected for the 2017 Kassel Photobook Award and was reviewed in Aperture,
Photoworks, Tank Magazine, Collector’s Daily and 1000 Words Magazine.

Muellner will be reading from his book at The Photographer’s Gallery on Nov. 5 in London. He will also do a reading at Shakespeare & Co. in Paris in November. Muellner’s previous image-text books are “The Amnesia Pavilions” and “The Photograph Commands Indifference.”

Timothy Johnson, professor and chair of the Department of Music Theory, History and Composition, published an article on the online open-access journal Engaging Students.

His article titled, “The Music of ‘Hamilton’ and its Historical, Cultural, Social, and Political Contexts,” appears in the most recent volume of Engaging Students: Essays in Music Pedagogy, which emphasizes student-focused learning.

This article describes his approach to teaching the hit musical in a senior seminar in Music, Liberal Arts, and Outside Fields, the capstone course for the Bachelor of Music and Bachelor of Music in Combination with an Outside Field degrees. In this course, “students interweave specific observations about the music, based on the musical expertise they [have] been developing as music majors, with broader connections to fields outside of music.”