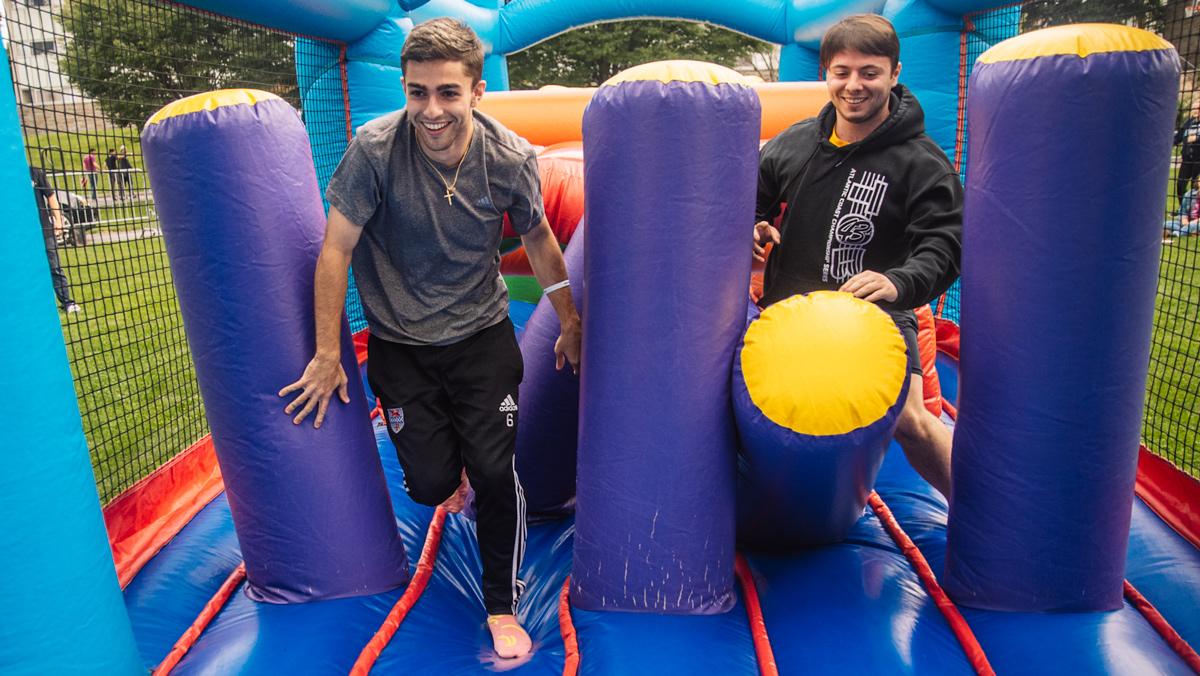 Kristen Harrison/The Ithacan
From left, seniors Colin Hay and Harry Margalotti race through an inflatable obstacle course at the Senior Class Picnic on Friday, Sept. 13 on the Campus Center Quads.
By The Ithacan
Published: September 18, 2019

Ticket sales opened Sept. 18 for the 61st annual Cortaca Jug Game between Ithaca College and SUNY Cortland. The game is at 1 p.m. Nov. 16 at the MetLife Stadium in East Rutherford, New Jersey. So far, over 30,000 tickets have been sold to the general public. Tickets are on sale for students, faculty and staff with a valid college ID until Sept. 20. Tickets can be purchased at the first floor ticket window at the Athletics and Events Center from 11 a.m. to 2 p.m. and from 6 p.m. to 9 p.m. Sept. 19 and from 11 a.m. to 2 p.m. Sept. 20. There is a limit of four tickets per eligible college ID. Students, faculty and staff may bring one additional ID other than their own to the ticket pickup location. Tickets are $15 and are for seats in sections 101–104, the home endzone of MetLife Stadium. Purchasers cannot purchase tickets in specific seats or sections, so those wanting to sit in the same row should purchase  tickets together.When purchasing tickets, students can sign up for a free bus that will leave from and return to campus on game day. The student bus will include breakfast and snacks. The first 100 students to register for the bus will receive a limited edition Cortaca T-shirt.

Ithaca College to host symposium on white nationalism in the U.S.

The Peggy Ryan Williams Difficult Dialogues Symposium focuses on topics that are often difficult to discuss. This year, Kelly Brown Douglas, dean and professor at the Episcopal Divinity School, will facilitate the conversation. The discussion will be held at 7 p.m. Sept. 26 in the Emerson Suites. Douglas also serves as the Canon Theologian at the Washington National Cathedral. She has authored articles and five books, including “Sexuality and the Black Church: A Womanist Perspective.” Douglas’ research focuses on womanist theology, sexuality and the black church. Douglas’ presentation, “The Soul of the Nation at a Time of White Nationalism,” will be followed by a question-and-answer period. The Peggy Ryan Williams Difficult Dialogues Symposium is named in honor of President Emeritus Peggy Ryan Williams, who was seen as an advocate for open discourse and a defender of academic freedom and
open inquiry.

In the first Ithaca music forum of the year, musicologist Kate Storhoff will talk about the recent progress made toward diversifying the historically male American band and wind ensemble community. Storhoff will present the forum “Gender and American Wind Ensemble Community: Challenging the Culture” at 5 p.m. Sept. 20 in the Nabenhauer Recital Room. There will be a reception following the forum.

Catherine Taylor, associate professor in the Department of Writing, and Nicholas Muellner, associate professor in the Department of Media, Arts Sciences and Studies, were featured in an article by Aperture, an international photography organization, for the Image Text Ithaca Press and MFA Program. Muellner and Taylor are co-directors of the ITI Press program, which Aperture named a leading example in experimental and hybrid image-text
photo books.

Scott Hamula, associate professor and chair of the Department of Strategic Communication, chaired a panel of the National Advertising Review Board (NARB) that found that an AT&T Services Inc. television commercial titled “The Historic Launch” conveys an unsupported claim made by the company. The company claimed that with over 99% reliability, its services are superior compared to at least one viable competitive service, and NARB  recommended the message be discontinued. AT&T stated that it will comply with NARB’s findings. Jennifer Gardner, senior director of Media North America, Unilever; Michael Cruz, senior director of brand marketing and communications for the New York Road Runners; and Tracy Broderick, president of Karsh Hagen, served on the panel with Hamula.

Andrew Smith, professor in the Department of Biology, published a paper in the Philosophical Transactions of the Royal Society that was co-authored by Kim Fung ’16 and Chris Gallego Lazo ’19. The paper, titled “Elasticity and Energy Dissipation in the double network hydrogel adhesive of the slug Arion subfuscus,” follows up on another paper from Smith’s lab demonstrating the power of the double network mechanism for creating tough glues. Smith’s lab was the first to demonstrate the use of the double network mechanism in a glue, and this finding has since inspired new synthetic adhesives that could be used for medical purposes.