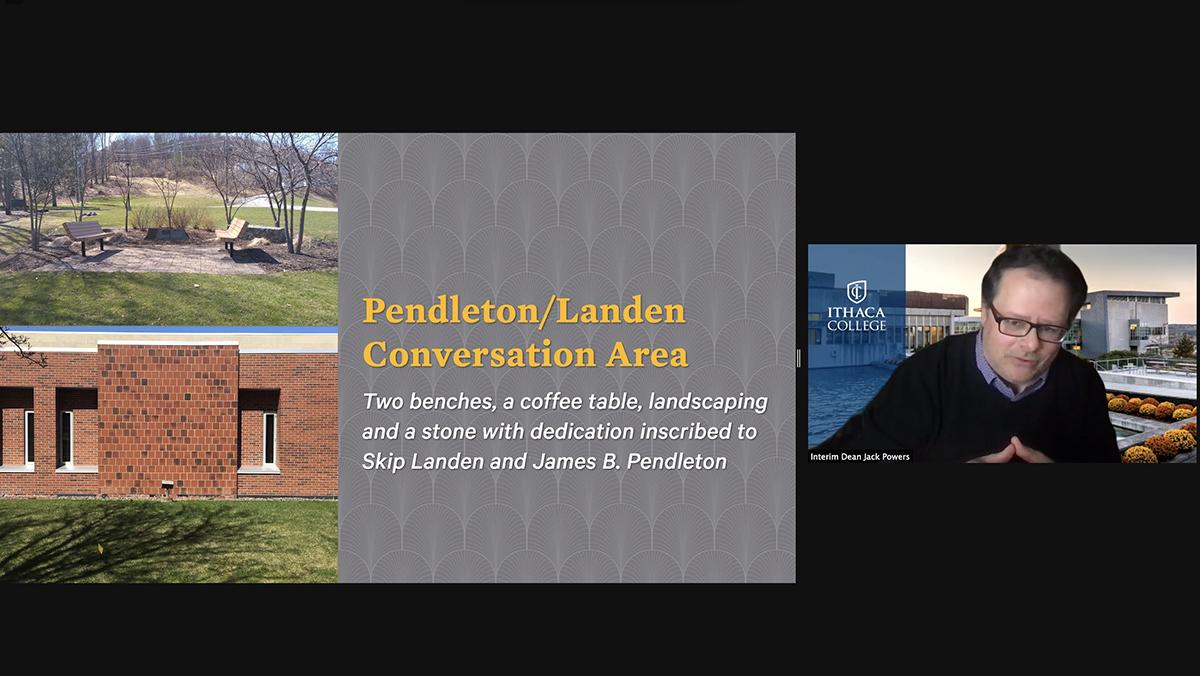 Members of the Ithaca College community honored 25 years of the James B. Pendleton endowment in a virtual celebration.

Following his death in 1995, James B. Pendleton, an interior designer and antiques dealer, left the Roy H. Park School of Communications an endowment of $17,000,000. Pendleton became inspired to establish a grant to the Park School after forming a friendship with former film professor Gustav “Skip” Landen in 1979. Currently, the Pendleton Endowment provides over $800,000 to the Park School yearly. The celebration was held April 7 and featured recipients of the Pendleton Grant.

Diane Gayeski, professor in the Department of Strategic Communications and former dean of the Park School, served as the event’s master of ceremonies. Gayeski said the Pendleton Endowment has helped contribute to the success of the Park School.

“For a number of years, for example, it paid dues to some of the professional associations that not only I benefited from — I could go to their conferences at a cheaper rate and I could get their publications — but I could also get a lot of research and a lot of connections for my students,” Gayeski said. “When I was teaching new classes, the Pendleton fund was what helped me get books to prep for those classes.”

Keynote speaker Thomas Bohn, former dean of the Park School, said the friendship between Landen and Pendleton was one that helped to cement the Park School’s place among other top communications institutions

“Say thank you,” Bohn said. “Such a simple and selfless gesture, but one that resulted in the single largest gift by an individual in Ithaca College’s history.”

Mike Royce ’86 is known for his work on shows like “Everybody Loves Raymond” and “One Day at a Time.” In his remarks, Royce said he remembers how working on his film for the Golden Doorknob competition helped improve his filmmaking skills. The Golden Doorknob competition began in 1969 when Landen gave the assignment to create a short film that found the most imaginative way to kill someone using a doorknob. The concept has since expanded to represent anything that comes to an end.

While initially thrown off by the nature of the prompt, Royce said it helped him to jump directly into an imperfect, but necessary, filmmaking process

“For me, when everything is possible, that’s when I can’t get anything done,” Royce said. “So that became the final test of the doorknob film, which is to just do something. Anything. Just keep moving forward.”

Royce also said the mistakes he made while working on films in college helped him to become more creative and willing to take on a variety of projects.

Cathy Crane, associate professor in the Department of Media Arts, Sciences and Studies, said the Pendleton Endowment drew her to the Park School due to its generous support for independent filmmaking.

“So much of independent filmmaking and the life of an independent filmmaker is spent fundraising, so to have financial support, especially in the early stages of research, is pretty significant and, I would say, actually pretty rare,” Crane said.

The grant has helped Crane fund her independent film “Crossing Columbus.” Crane said the support she received from the grant helped her not only in the early stages of the filmmaking process in 2017 but also as recently as 2020 near the film’s completion.

“When I discovered that as a faculty member in the Park School that I would be eligible for up to $5,000 a year in film production support, I felt like I’d been dealt a pretty good set of numbers — and I don’t play the lottery,” Crane said.

Tara Eng ’20 received the Pendleton Grant to work on her senior thesis film, “On the Fenceline: A Fight for Clean Air.” The documentary tells the story of Philly Thrive, an activist organization seeking environmental justice after an explosion at a South Philadelphia oil refinery in June 2019. The film has been screened at a number of professional film festivals.

Eng said she used the funds from the Pendleton Grant to immerse herself in the production of the film. Most of her time during production was spent in South Philadelphia attending city council hearings and community gatherings, which Eng said helped her produce a more impactful film.

“We’ve heard from a few viewers who were inspired to connect with organizing movements in their own communities, which is a chain of impact that would have never formed without the access to a wider distribution that the grant opened up for us,” Eng said.