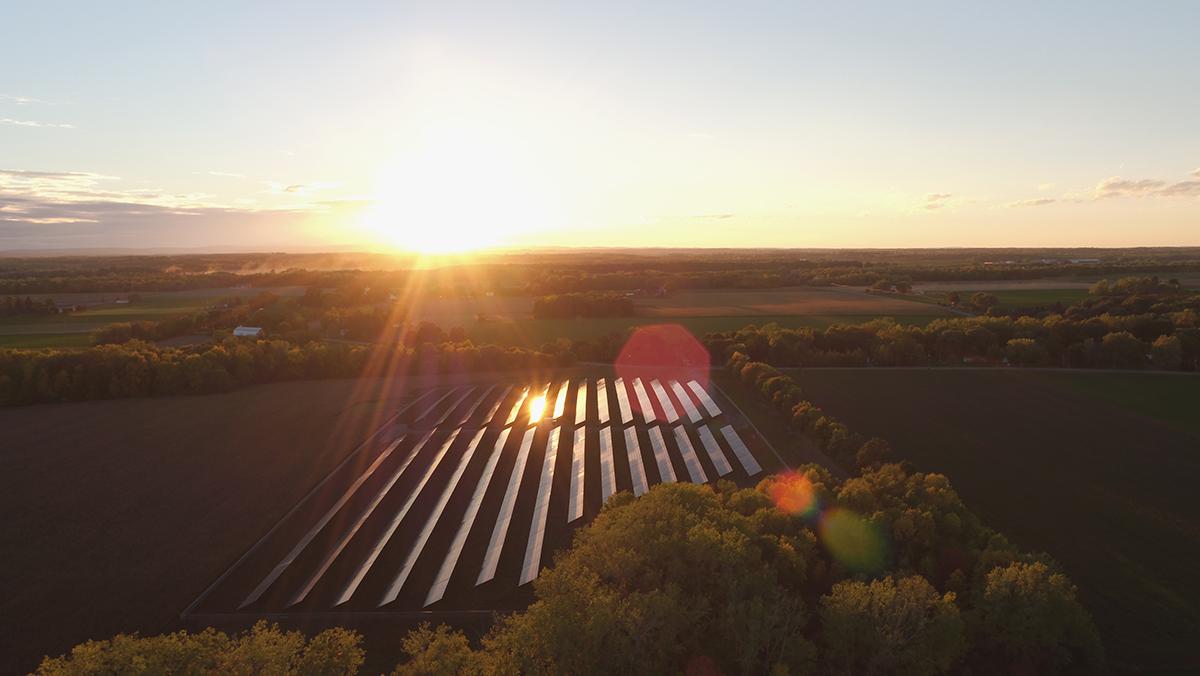 Courtesy of Ithaca College
The college has purchased all of the solar power generated from a solar farm in Seneca to offset electricity use since 2016.
By Clare Shanahan — Assistant News Editor
Published: December 7, 2022

Ithaca College received a Gold rating for its sustainability through the Sustainability Tracking, Assessment & Rating System (STARS) and although the score comes as a positive for the college, the report also showed areas for improvement.

STARS is facilitated by the Association for the Advancement of Sustainability in Higher Education (AASHE), and the college has completed a STARS report every two to three years since August 2011 to assess campus sustainability. On the 2022 report, the college received a score of 67.16. This score is based on the percentage of total applicable points earned out of 100, plus up to 4 points in the category of innovation and leadership, for which the college earned full credit.

Julian Dautremont, director of programs and STARS team member at AASHE, said the sections of STARS are determined based on many things, including other frameworks like the United Nations Sustainable Development goals.

According to AASHE, STARS reports are reviewed by the organization when they are submitted, but not all information is verified. Individual institutions are responsible for ensuring the information that they submit is accurate. After submitting the report, college representatives work with AASHE to correct any factual errors, these changes must be made before a report is made public. Colleges also receive incentives in the form of additional points if they conduct internal or external reviews of the information in the report before it is submitted.

Dautremont said for most schools, only about one third of the report is reviewed with a focus on sections that have the most room for error. In order to make the reports trustworthy, there is also an established system for people who view the reports to complete a form if they notice any errors or inaccurate information. Additionally if a school receives a platinum rating, the highest possible ranking they will be reviewed more thoroughly.

The college’s report was completed by Scott Doyle, director of the Office of Energy Management and Sustainability. Doyle began working at the college in June 2022, giving him only about five months to complete the report before the 2019 report expired Nov. 24.

“It’s good to a point, like it’s taking a pulse,” Doyle said. “Be proud of what we’re doing, but it’s an indicator to help push us forward. We can’t stop. This is a check in and we need to use that to help move us forward.”

In Spring 2021, Rebecca Evans, former campus sustainability coordinator, left the college after her position was eliminated. In November 2021, Gregory Lischke, former director for the Office of Energy Management and Sustainability resigned and the position remained unfilled until Doyle came to the college in June 2022.

Doyle said based on the impacts of the pandemic, turnover in the Office of Energy Management and Sustainability and turnover at the college in general, he expected a slip in the college’s ranking. The previous report was submitted in November 2019 and the college also received a Gold rating, with a score of 67.33 points.

“There is still a lot happening across campus, but could there be more?” Doyle asked. “Yeah. So I think given the last three years, I was enthused that we’re in the same kind of camp.”

One category of the report is Points of Distinction. In the 2022 report, this section highlights the 5-year anniversary of 100% green power use at the college. According to a report of the college’s energy use submitted to the U.S. Environmental Protection Agency, as of Oct. 6, 117.6% of the college’s electricity use in 2022 has been sourced from green power.

Doyle said he wants to focus on improving communication around sustainability at the college, including the solar farm, which many people may not know about because it is not on campus.

“Let’s do a better job at telling the story,” Doyle said. “That’s what I’m really interested in getting a better angle on, is how we communicate what we’re doing and where we could improve.”

According to the report, despite this distinction, the college only received a score of 1.43/4 in the field of clean and renewable energy. This is likely because 95% of energy used for heating buildings comes from natural gas.

Two new sections the college received credit for in 2022 were incentives for developing courses related to sustainability and the community garden, which was not a section in the 2019 report.

According to the report, the college offers awards and grants to faculty for changing course curriculum and supporting new themes, specifically the Instructional Development Fund (IDF).

Amy Rominger, clinical associate professor in the Department of Speech Language Pathology and Audiology and chair of the IDF committee, said the committee chooses courses based on the attributes of the class. Specifically, Rominger said they look for classes that align with some of the goals of Ithaca Forever, including furthering sustainability at the college.

“It’s just so inspiring to read through these proposals that my colleagues put forward and to know that not only does it help them to do their jobs better and to provide better curriculum for students, but to know that it really had an impact on the overall sustainability of the college is pretty incredible,” Rominger said.

Anne Stork, assistant professor in the Department of Environmental Studies and Sciences, is the faculty adviser for the campus gardens, specifically the largest garden located by Farm Pond Road. Stork said students in some classes use the garden, but she would like to see it used more broadly by the college community.

“It’s pretty magical when people kind of firsthand connect to where their food’s coming from,” Stork said.

The college also received full STARS credit in some sections in both 2019 and 2022, including the undergraduate program section community partnerships, biodiversity and support for underrepresented groups.

Although the college received a gold ranking in STARS, there were also many sections where the college saw a decrease from its 2019 scores, received a zero or had notably low scores.

Doyle said he has been working on how to decrease the size of the vehicle fleet and working with an outside contractor, CLEAResult, along with other New York school districts and towns to brainstorm how to electrify the fleet.

Some changes to the report could be attributed to differences in how the assessment was done in 2019, versus 2022. For example, the building design and construction score has decreased since 2019. This decrease occurred despite the college reporting more building space that is certified in sustainable design and construction. Other sections received no points because they were not updated with new information since 2019.

Like Doyle, Stork said while the college’s ranking is great, there are always ways to continue improving and expanding sustainability, and that the college can even go beyond that to create a system that supports the environment and equity together.

“I would argue, let’s not stop at sustainability, which is a little bit status quo,” Stork said. “Let’s look toward thriveable, and if we put our mind to it, we could be carbon neutral so quickly and we could have a bunch of practices in place that support a thriving community.”