UPDATE: Occupation of PRW by Students for Labor Action called off 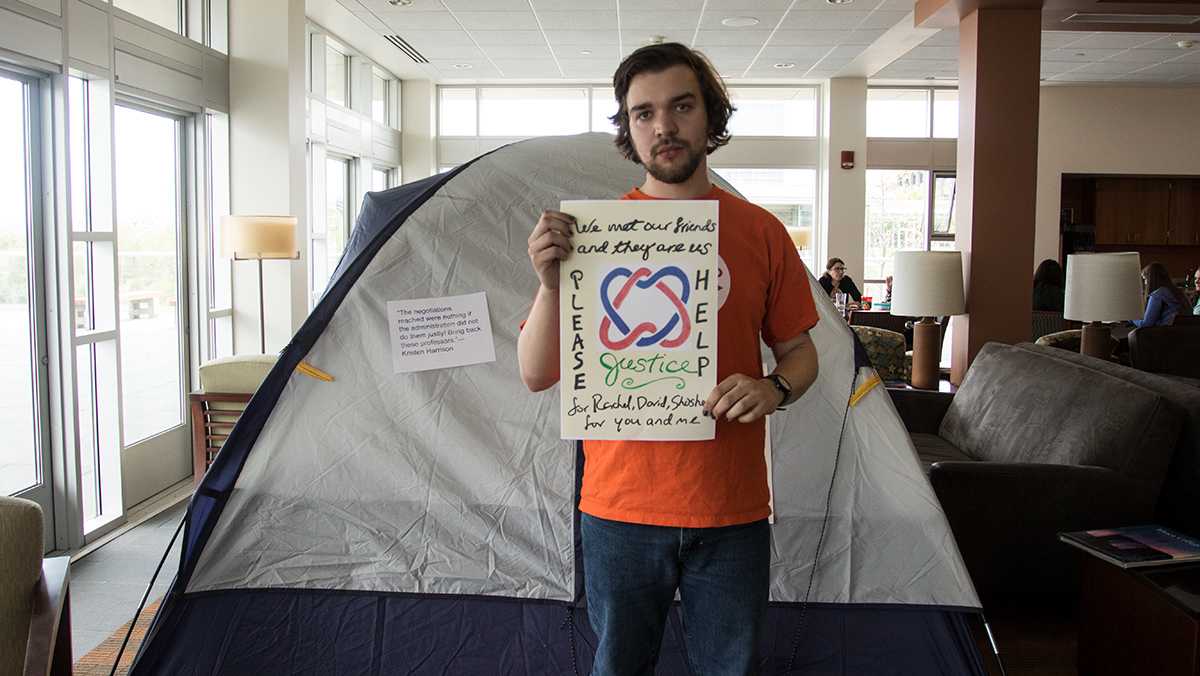 A camping tent with shiny, gray nylon siding does not blend inconspicuously into the Peggy Ryan Williams Center’s professional aesthetic.

Yet, on the morning of May 2, IC Students for Labor Action and members of the contingent faculty union erected the tent in the lobby of Ithaca College’s administrative building, symbolizing their message to the administration: They were there to stay.

However, their initial plan to occupy PRW Center for three days was cut short. The student group and the faculty union planned to occupy the building for three days to protest what they call “retaliatory firings” of three contingent faculty members who had been involved in the union’s previous negotiation efforts. David Kornreich and Shoshe Cole, assistant professors in the Department of Physics and Astronomy, and Rachel Gunderson, instructor in the Department of Health Promotion and Physical Education, were all previous members of the full time–contingent faculty bargaining committee and have filed an unfair labor practice lawsuit against the college with the National Labor Relations Board.

Senior Taylor Ford, president of IC Students for Labor Action, said the occupation was called off because the administration responded to their requests to bargain over the positions of the faculty. He said the union would like to either get the faculty members their positions back or reach a settlement with the college instead of moving forward with the lawsuit.

In a statement issued on Intercom, the administration said it met with members of the union April 21 and told them they would be willing to discuss the topic after the college filed its response to the NLRB lawsuit. That filing took place May 1. Ford said the union was not guaranteed a bargaining session by the administration, prompting the occupation.

Despite the agreement to come to the table to discuss the terminated positions, in the statement, the college said the union “has continued to publicly misrepresent that three faculty on one-year temporary appointments were fired.” It said that all three faculty members were aware of their contract length. According to the statement, Kornreich had applied for a full-time non-tenure-eligible position in the Department of Physics and Astronomy, but the faculty search committee chose not to move him forward as a semifinalist for the position. Cole applied for the same position and was identified as a semifinalist but was not moved forward as a finalist. However, the statement did not provide a reason as to why they were not selected to move forward in the search.

The statement said Gunderson was informed in February 2016 that this would be her final year in her position, prior to the formation of the bargaining unit for the full-time faculty members and prior to the overall union negotiations. There is contestation between the administration and the contingent faculty as to when the full-time faculty began bargaining: Contingent faculty said full-timers began bargaining with the part-time faculty in November 2015, but that the administration, from the beginning of negotiations, did not want to recognize the two groups as one unit.

Erin Francisco, lecturer in the Department of Writing, said she was unsure if the accounts provided by the administration were correct — Cole, Kornreich and Gunderson could not be reached to comment. But, she said that in her opinion, it seems the college is trying to justify its actions to not rehire the professors. Francisco said she feels that if these professors’ positions were opened to other candidates while the current professors have been working successfully at the college for years, that is the same as firing them.

Since the filing of the lawsuit, the contingent faculty was able to acquire a first-time contract with the college. However, the union has not remained silent concerning the fate of the three faculty members. On April 27, students from SLA delivered a petition that had 670 signatures on it to the administration, calling for the rehiring of the three faculty members. Ford said the sit-in was a step up to put pressure on the administration.

“We decided we would bring the issue to them — bring it to their doorstep and make it hard for them to forget that this is still going on,” Ford said.

In addition to the camping gear, the sitting area of PRW Center had been transformed since the sit-in began. Colorful signs lined the walls and messages had been taped up from various students, alumni and faculty professing their support for the three contingent faculty members:

“This is just disgraceful.”

“I vow to never donate as an alumnus unless this wrong is corrected.”

“Rachel is a great professor and even better person.”

At around 9 p.m. May 2 in the sitting area of PRW Center, six students and one faculty member were lounging in the seating area of the building that is meant to be vacant after 5:30 p.m. Some worked on homework, others were making signs to support their cause — all while two officers from the Office of Public Safety and Emergency Management supervised the group from the front desk.

The students were not allowed to occupy the building without a cost. Anyone who walked into the building was judicially referred because, according to the Student Conduct Code, the occupation after business hours was considered trespassing. Ford said he discussed the issue with Bill Kerry, director of Public Safety, and Ford said he knew the morning of the occupation that he would have to accept the judicial referral in order to carry out the sit-in.

“He didn’t try to stop us from doing this,” Ford said. “He made very clear from the start that we would be allowed to remain in the building. … They would not try to remove us.”

Ford said the threat of punishment is one of the reasons why faculty were hesitant to join the occupation late at night. For them, if they trespass into the building, a report is taken and sent to their supervisor.

John Burger, lecturer in the Department of Health Promotion and Physical Education, said he is more worried about not doing anything to correct the injustice he thinks occurred than facing judicial action from the college.

He was one of the occupiers who spent the night creating posters to hang on the walls of PRW Center. On a yellow sheet of paper, Burger drew a purple alligator with its jaws ajar. It reads, “Don’t feed the market model,” meant to be a critique of the administration’s frequent argument throughout the bargaining process that faculty at the college are paid a competitive market-based salary, which the union argued was inadequate.

But for Burger, it does not matter whether illegal activity occurred, he said. Regardless, he said, these faculty members no longer have jobs, and to him, it seems like the college has thrown them to the curb. When speaking about it, he became choked up.

Burger said he will continue to work with students and other faculty to right what he perceives as an inhumane action against the three fired members.

“People worked here for six or seven years and they’ve been doing a good job. … They haven’t even been shown the door — it’s a trap door — that they just opened up and they fell through. Of course they’re not going to say ‘We fired you because…’ they don’t even need a reason to do it because they can. … So I think the best response is alligators,” Burger said, holding up his half-completed sign. “It’s just not the way to treat people.”