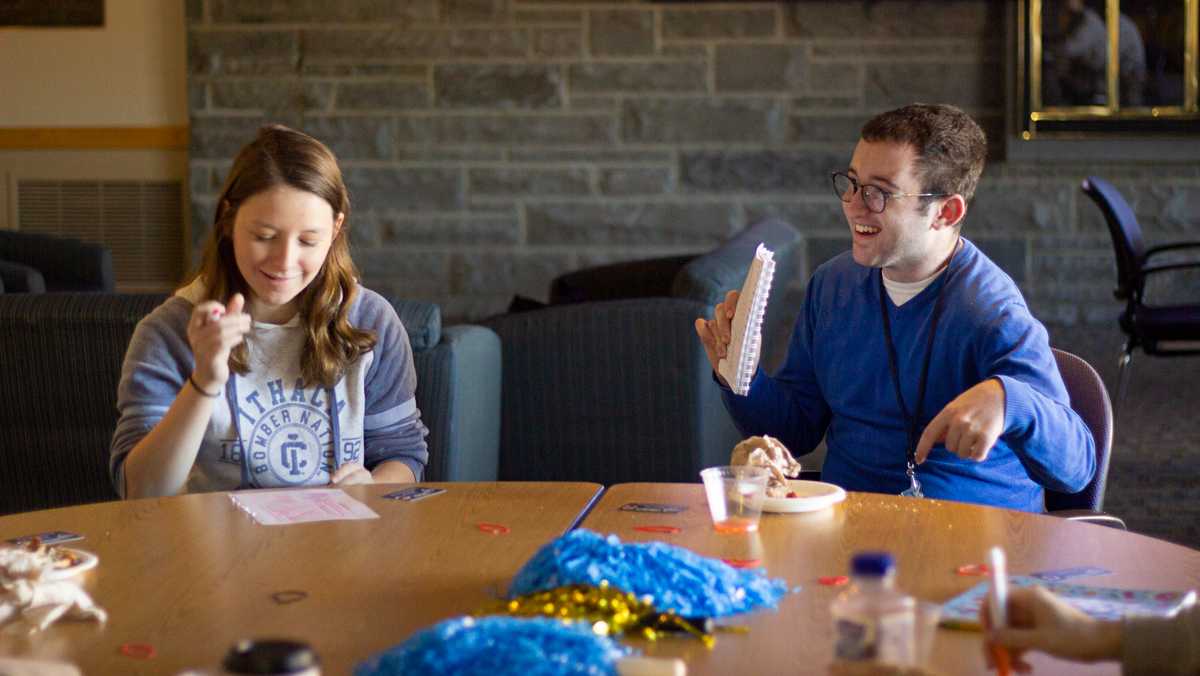 The game was played at a lower volume, and the room was dimly lit. Approximately 20 students attended the event according to senior Kimberly Caceci, DEAR@IC president and co-founder. DEAR@IC was founded in September 2018. The organization aims to provide a safe and accepting environment for students with disabilities and able-bodied allies. She said the purpose of the event was to provide a sense of calm for students who wanted to attend a viewing party without the stress of large crowds and loud noises.

“We are the only student organization on campus to create a safe space for students with disabilities and able-bodied allies to come together to talk about disability, our experiences, resources on campus and the area,” Caceci said.

Students attending the viewing party in the sensory room in Klingenstein Lounge concentrated on crossword puzzles and talked to friends while the big game played in the background.

Junior Jamie Duncan, a student attending the event, said they chose the sensory room over other rooms on the same floor because the room was calmer and more relaxed.

“I think that the sensory room is really important to be noticed and to get out there amongst the community,” Duncan said. “I think that it’s a very helpful thing for people who have disabilities, and people also just want a chill place to watch the game without a bunch of people around. I think that the more people that come, the more people will be able to take advantage of everything.”

Senior Laura Tarone said because she is an occupational therapy major, she wanted to observe how the sensory room is set up and see the purpose of the objects that were provided.

“I think it’s really important,” Tarone said. “They have good lighting here. Sometimes bright lights are too much for some people. It’s not too loud. It’s a nice calming environment to watch the football game.”

Senior DEAR@IC treasurer Maggie Callery said the inclusion of tactile objects allowed for students to alleviate the stress they might experience in social situations.

Activities and toys like crossword puzzles, sudoku, coloring books, stickers, spinning tops, yo-yos, bubbles, paddleball, squishy toys, stress balls, weighted blankets and sequin pillows were also available on side tables for everyone to use. Callery said stress balls and squishy toys are able to help students feel more comfortable in the environment they are in.

“We wanted it to be a quiet place for people to come and spend time, and we thought the crossword puzzles might be a nice way for people to distract themselves or occupy their minds while they’re in here and they’re enjoying the quieter environment,” Callery said. “It’s also facilitating some social interaction because people are sharing the crosswords, people are talking about what the answers might be, so it’s also doing some community building.”

On the second floor of the Campus Center, three separate rooms were showing the 61st annual Cortaca Jug game, which was held for the first time at MetLife Stadium in New Jersey. Approximately 209 students watched the game from the Emerson Suites. Three projectors displayed the game. Pizza, chicken wings, chips and salsa and hotdogs were provided at the event.

Caceci said the event space was chosen because it is far enough from the Emerson Suites so it does not get too loud but close enough so students could get food from the event and bring it back to Klingenstein Lounge.

DEAR@IC pitched the idea to the Cortaca Student Engagement Committee to turn one of the viewing rooms into a sensory room.

“I think just giving an option to still enjoy campus events and social interactions and social settings like a viewing party or a football party or anything like that, it still gives them the option to hang out and enjoy what other people are doing on campus,” Caceci said. “But it’s just being considerate of their sensory needs.”

Caceci said there are plans to hold a similar event in February 2020 for Super Bowl LIV in collaboration with IC After Dark.