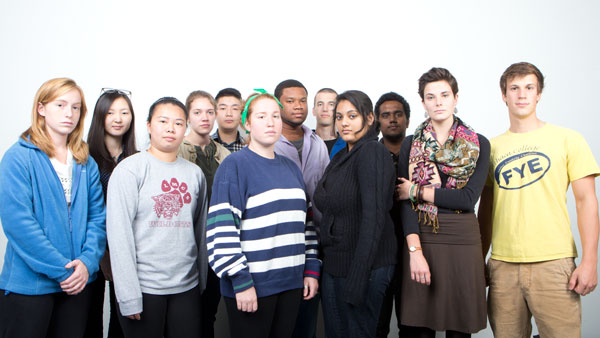 With Ithaca College strengthening its efforts to achieve the goals laid out in IC 20/20, the college’s 10-year strategic plan, diversity has increasingly been in the spotlight.

Beginning this week, The Ithacan is launching a three-part series to break down the college’s ALANA numbers, the ALANA community and IC 20/20’s diversity goals.

This year, there is a record-breaking 21.7 percent African, Latino, Asian and Native American representation among Ithaca College’s first-year students — up from 19.4 percent last year — according to the finalized enrollment data from the Office of Admission.

This growth brings the college a step closer to achieving its diversity goals that are part of IC 20/20, the college’s 10-year strategic plan. Eric Maguire, vice president of enrollment and communication, said the college is currently looking to exceed a 20 percent ALANA college-wide representation.

Last year, the college had a 16.1 percent representation, and this year, ALANA students embody 17.7 percent of the 6,723 students currently enrolled.

Retention rates of ALANA students are not available to the public, according to the Office of Institutional Research.

Maguire said the college does not use an affirmative-action policy in the student application review process to increase diversity. The process is race-neutral, and all selected students are equally qualified, he said. However, the college is aware of each student’s gender, ethnicity and racial information during the review process, Maguire said.

According to law, affirmative-action policies require active measures be taken to ensure that historically underrepresented groups are given the same job and education opportunities.

The college has had an Equal Opportunity and Affirmative Action policy statement since 1984, but it only applies to employees. David Maley, associate director of media relations, said the college does not label its recruitment efforts as affirmative action.

Laura Stoker, professor of political science at the University of California, Berkeley, said affirmative action often occurs prior to any college’s selection stage, including recruitment.

“All of those kinds of programs have been considered by the government to be affirmative-action programs,” she said. “But the bottom line is  … [if ordinary people] use the phrase, they are thinking someone is sitting in a college admissions committee saying, ‘This person is a black person, let’s let them in because we haven’t met our quota.’”

According to the 1978 Regents of the University of California v. Bakke court decision, a quota system is illegal, yet some still believe that is how affirmative action operates. Now, several colleges award extra points to students of underrepresented groups during the application review process, which is legal.

The 2.3 percentage jump in ALANA representation at the college could be the result of policies and efforts the college implemented this year, Maguire said. One such policy is the standardized test–optional policy, which no longer requires students to submit SAT or ACT test scores with their application. Maguire said research has shown requiring test scores limits the applicant pool.

“There are correlations with socioeconomic status and standardized test scores, and there’s also correlations with socioeconomic status and ALANA population,” he said. “So if we are saying that there are these biases that are in the standardized testing that [are] impacting families from low socioeconomic backgrounds and from ALANA students, then we are, by default, by requiring those test scores, limiting that population from our campus, and we wanted to remove that kind of barrier and open up greater access.”

Though the college claims to be race-neutral in its admissions process, it does consider race in some recruitment efforts.

Gerard Turbide, director of admission, said the college does not have specific fall recruitment programs for ALANA students. However, the college does work with community-based organizations that provide admissions support and resources to historically underrepresented students. These organizations, which Turbide declined to identify, expose the college to prospective students. College representatives also travel through the U.S. to find potential applicants.

“We make decisions about where we travel, for example, based on a variety of things: diversity, strength of schools, past applicant history from different schools,” he said.

On possible concern is how the college quantifies diversity and identifies ALANA students. Data is taken from students’ college applications, where students check a box with the race and ethnicity they identify with most, but this information cannot be verified by the college, Maguire said.

Theoretically, if a student who is not ALANA identifies as ALANA, then the college could make the assumption he or she is ALANA. That student could receive the merit-based ALANA scholarship.

Malinda Smith, director of multicultural affairs at the Office of Student Engagement and Multicultural Affairs, said some students self-identify only as ALANA in their college application because they have the misperception that because of affirmative action policies, all colleges will award them extra points for being a certain race or ethnicity.

“They’ll check the box thinking that either money or admissions will increase in their favor,” she said. “Then they’ll get here, and then have nothing to do with that community, so basically they have used it as a tool thinking that it will increase their probability of getting accepted. So there is a game that is played, and it is unfortunate. But there is no litmus test, we can’t say ‘Well, you put this down, prove it.’”

Furthermore, she said the Martin Luther King, Jr. Scholar Program was created in 2002 to recruit talented, high-performing ALANA students from various backgrounds and of various majors who are concerned with social justice. Each year, about 60 MLK scholars can receive up to full tuition in aid, with a minimum merit-based scholarship of $25,000.

“The program is named after Dr. Martin Luther King and the work he did during his lifetime,” she said. “The principles of equity and equality in social-justice are the framework of the program.”

There are currently two open-house programs in the spring. One is Ithaca Today, which is an open house for all accepted students. The other, An Inside Look, was created in 1994 specifically to give ALANA students a glimpse of what it would be like to be an ALANA student on campus.

Senior Tariq Meyers said programs like An Inside Look and the MLK scholarship motivate ALANA students to succeed where they have historically been marginalized.

When the program was originally created, Turbide said, 7 to 8 percent of the student body was ALANA. The program was a three-day immersive experience. Two years ago, the program was reduced to an overnight visit that segues to the Ithaca Today open house.

Currently, An Inside Look is undergoing transitions. Lee Bostic, former director of the program, has moved to another institution, and the program currently has no director. Turbide said the college is discussing the future of An Inside Look and the possibility of it becoming a segment of Ithaca Today.

Though the institutional definition of diversity is not limited to race, and also considers other factors like religion, sexual orientation and age, ALANA representation plays a larger role in the college’s diversity goals, Maguire said.

However, there are some flaws that come with using the term ALANA as a partial measurement of diversity, Maguire said. The term clumps four groups into one category, which results in misconceptions about growth in diversity.

“It is a term of convenience in terms of a reference point and abbreviation that is easy to convey and understand across campus, but it is not one that I think is as helpful when we are thinking about the diversity of our campus, because if we had a very high ALANA population, but that ALANA population was largely driven by one particular racial or ethnic category, would we be a diverse campus?” he said. “I could make the argument that we weren’t.”

Outside of the admissions office, the term ALANA provides a sense of community for students in the college. Senior Cedrick-Michael Simmons, president of the Student Government Association, said the ALANA community is an avenue through which the college can inform ALANA students of the resources available to them.

The ALANA community makes sure ALANA students know they are not alone on this campus, he said.

“The reality at this institution is that students of color have unique experiences, [and] because we are at a predominantly white institution, different initiatives and outreach efforts are used to reach out to those self-identified students of color.”