East Tower to get two new learning communities next semester 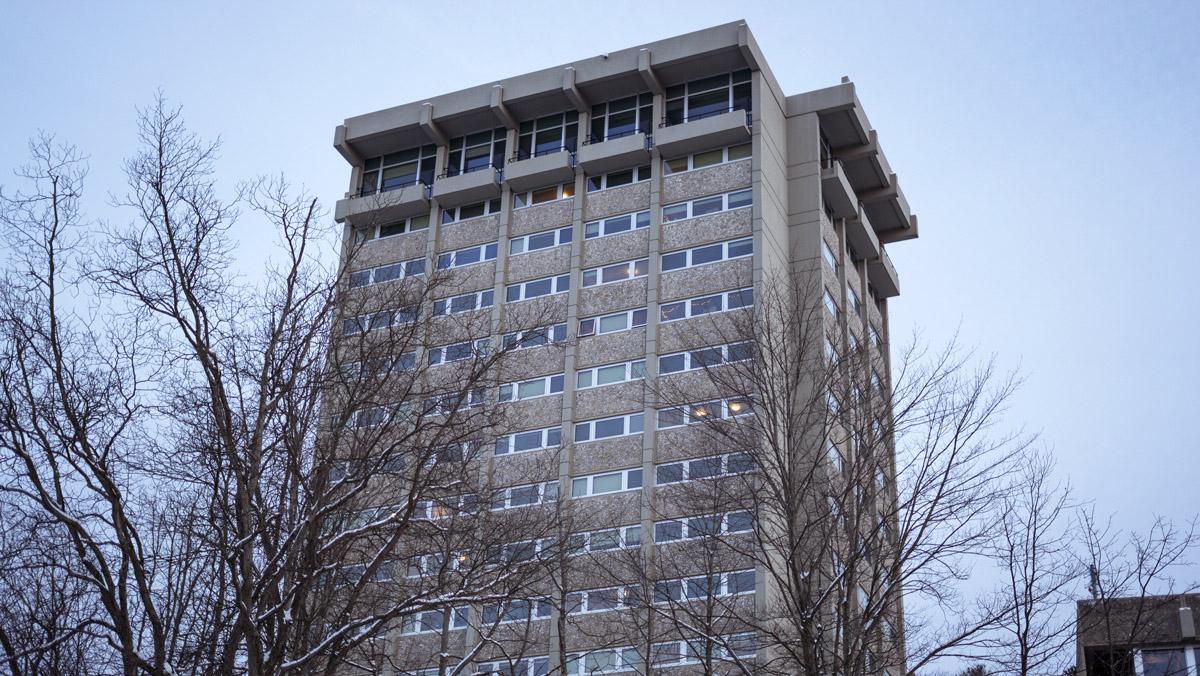 Sabrina Chang /THE ITHACAN
Next semester East Tower will be home to the First Place and Language House residential learning communities and a sophomore living space. The college currently has 10 RLCs.
By Cody Taylor — Staff Writer
Published: March 6, 2019

Two residential learning communities (RLC) — the Language House and the newly created FIRST Place — and a new non-RLC sophomore living space will be added to East Tower next semester.

RLCs are specialized residences on campus for students who are interested in living with students who have a certain interest or identity in common. There are currently 10 RLCs on campus. Samantha Stafford, assistant director for the Office of Residential Life said the changes will not cost the college any additional money.

The Language House is the college’s language immersion residence that houses students who are fluent or interested in languages other than English. It is being moved from Terrace 5 to the fourth floor of East Tower because of renovations that were done to East Tower.

Stafford said the relocation will provide the Language House with more space for students to interact with one another.

“The reason why we moved it to the East Tower is because we know that these spaces are nice,” she said. “We just renovated the spaces, so they are gender neutral single–use bathrooms and that is a big push for our RLC’s to be more inclusive.”

Stafford also said because of the variety of rooms and communal spaces, this will provide more room for students to meet and interact with one another on a daily basis.

“There is different kinds of rooms, there is a lounge on each floor and for the Language House, the whole goal is to have people be able to converse,” Stafford said.

Stafford said all students who are interested in maintaining or learning a language are welcome to join.

“We’re encouraging native language speakers, as well as people who just want to learn the language who are either taking classes or just want to improve their language skills and have passion for it,” Stafford said.

“I’m trying to build my Italian language skills, and I had friends that lived here last year,” he said. “All I can say is that I would dislike living in East Tower.”

Ronald Trunzo, director of Residential Life and Judicial Affairs, said there are benefits to the East Tower location.

“As with anything new, we will give it a try and see how it goes in the new location,” he said. “One benefit of the Towers location are the new single private bathrooms on the floor, which offer the greatest flexibility for students in providing a gender–neutral option.”

FIRST Place RLC was created this semester after being requested by students and faculty. It will be located on the fifth floor of East Tower and open to any student who identifies as a first-generation college student.

FIRST Place is designed to help students who are new to the college adapt and create relationships with fellow classmates, faculty and staff and support them in their college journeys, which may be more challenging for them due to their lack of familial experience in higher education.

Stafford said this learning community was something that the campus community has been looking forward to.

Junior Diana Castillo, who is currently the resident assistant on the fifth floor of East Tower and the president of the first generation club on campus, said she believes FIRST Place will provide first–generation students a place to celebrate their identities.

Stafford said two of the RLCs already mix upperclassmen and underclassmen, so having sophomores and freshman students one floor apart in East tower should not be a problem.

“We currently have two RLCs — HOME and Honors — that combine upper year students with first-year students, and both work well,” Stafford said. “It will give an opportunity to create meaningful relationships between classes.

Sustainability RLC cancelled due to low number of applicants