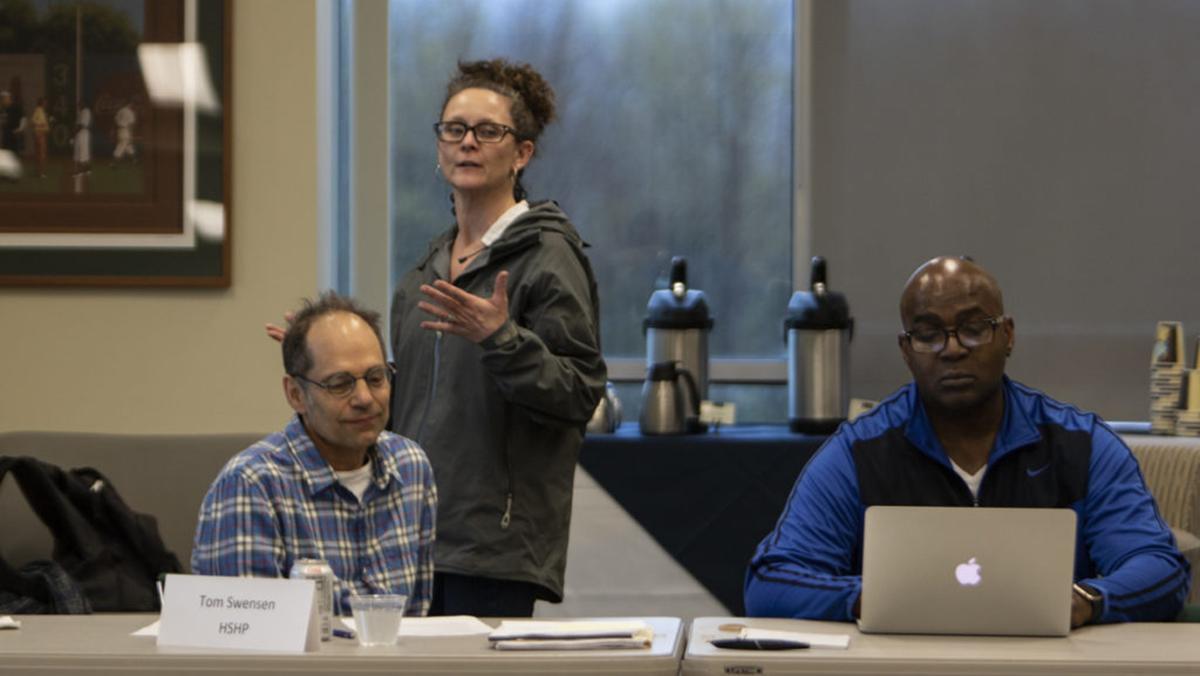 Maxine Hansford/The Ithacan
Kelly Ann Robinson, manager in Student Accessibility Services, answers questions from Faculty Council members at the May 7 meeting. La Jerne Cornish, provost and senior vice president for academic affairs, announced a drop in enrollment numbers for the Class of 2023 at the end of the meeting.
By Ashley Stalnecker — Staff Writer
Published: May 12, 2019

La Jerne Cornish, provost and senior vice president for academic affairs, announced at the May 7 Faculty Council meeting that Ithaca College did not hit its target enrollment numbers for the Class of 2023.

“There is no need for me to tell you that that will have an impact,” Cornish said. “And it will be a four-year impact. So, it’s a good thing we have a strategic plan and that the plan really was created to respond to such an event like this. We will be ready, but we will have to get things in motion quickly.”

During the meeting, the council also voted on a new executive leadership team for the 2019–20 academic year.

The council voted in favor of appointing Chris McNamara, clinical associate professor and clinic director in the Department of Physical Therapy, as chair of the Faculty Council. She was the only member nominated for the position.

Jana Waller, clinical assistant professor, fieldwork coordinator and chair of the Department of Speech–Language Pathology and Audiology, was the only member nominated for the vice chair position. The council voted to elect her for the position.

Stanley Seltzer, associate professor in the Department of Mathematics and current secretary for Faculty Council, was nominated to continue in the secretary position. The council voted to elect him as secretary for the 2019–20 academic year.

She said she is also working to add more detail to the accommodation letters that are sent out to students and faculty when a student needs accommodation with links to the policy.

“I think it’s an undue burden for [faculty] sometimes to try to interpret that,” Robinson said.

For practicums, clinicals and student teaching, New York State requires students to be present a certain number of days to meet the requirement to become a licensed professional in their fields. Robinson said students who cannot attend the required number of days to fulfill these requirements will be unable to obtain their licenses and, in turn, graduate. Robinson said she will be meeting with the Teacher Education Committee on May 13 to discuss an alternative that may require speaking to New York State regarding its licensing requirements.

“It doesn’t seem right to me that if you have a disability you would be excluded from something, and your disability is prohibiting you from whatever your goal is,” Robinson said.

She said the final section of the handbook, 4.17, which is about the process of amending the handbook and was updated last year, has not yet been added to the full handbook online. Plante also said she will be working with two colleagues over the summer to eliminate implicit and explicit bias in the handbook, and the group will report back on this in Fall 2019.

Jason Harrington, associate professor in the Department of Media Arts, Sciences and Studies, said it is important to identify policies being approved and getting put into practice to prevent another situation like losing the approved Intellectual Property Rights from 2015. He said it is more likely that other approved policies will be forgotten if someone is not responsible for updating the policies.

Nancy Pringle, executive vice president in the Division of Human and Legal Resources and general counsel, introduced her successor, Hayley Harris, at the meeting. Harris said that historically the faculty has not worked closely with human resources but that she plans to change that in her new role.

The Ithaca College Faculty Council discussed the possible implementation of an updated Intellectual Property Policy at its monthly meeting on Oct. 1 in the Athletics and Events Center VIP Room.