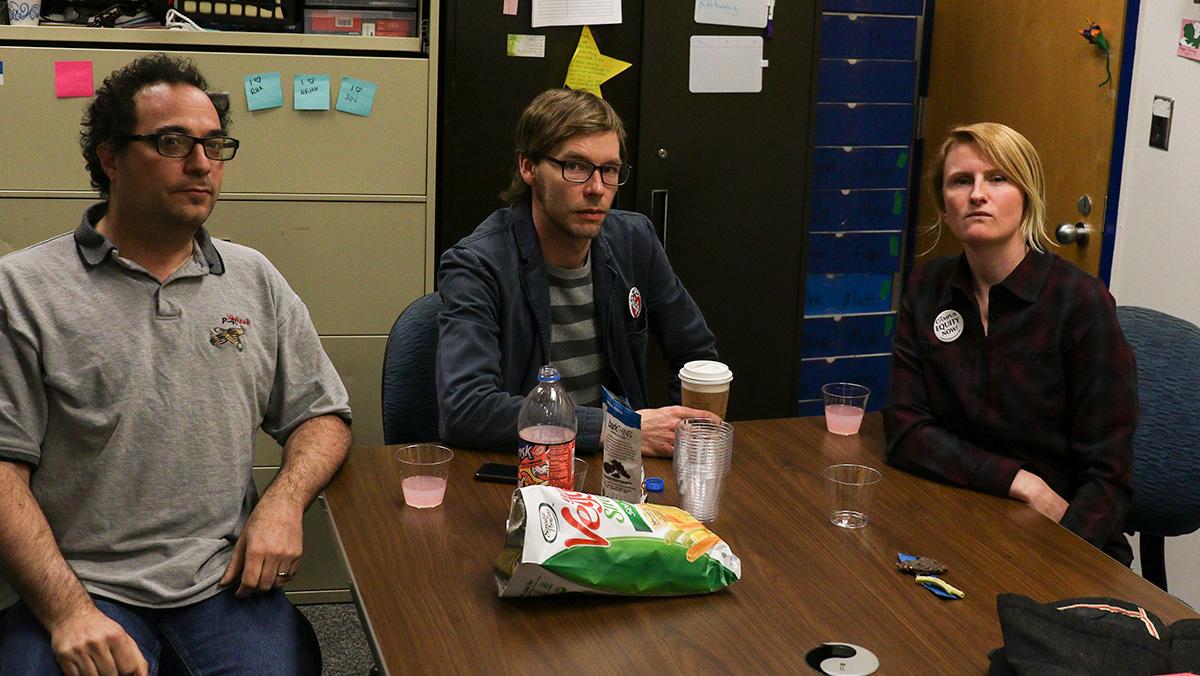 Ryan King/The Ithacan
David Kornreich, assistant professor in the Department of Physics and Astronomy; Brody Burroughs, lecturer in the Department of Art; and Rachel Gunderson, instructor in the Department of Health Promotion and Physical Education, are all contingent faculty members who are on the bargaining committee. They attended the March 20 Student Governance Council meeting to discuss recent events regarding union negotiations.
By Ryan King — Staff Writer
Published: March 21, 2017

The meeting took place March 20, the day before the scheduled bargaining session between the full time– and part time–faculty unions and administration. The SGC meeting went into executive session, so news media and individuals not on the SGC were prohibited from attending until after the contingent faculty and administration representatives had left.

Marieme Foote, president of the SGC, said the meeting was important to have because it helped the senators learn both sides’ perspectives on the union negotiations.

“They both seem to be valid, but they’re just missing each other,” Foote said. “I think the meeting went well in terms of actually being able to see where those discrepancies are occurring. It did get heated a little bit, and a lot of the senators were very passionate.”

The contingent faculty members said they requested a joint session, but Petrosino said the SGC decided to keep the sessions separated after the administration expressed concerns that a joint session could result in the two sides bargaining with each other in the SGC meeting.

“One of the things that we’ve come to learn is that a lot doesn’t happen at Ithaca College because people don’t talk to each other,” Burroughs said. “I think that the more conversations we have about hard topics in the open, the better.”

Going into executive session was a request from Petrosino, who said she did not want to risk having classified information getting released.

Senator-at-Large Lucas Veca said that while he understood why the administration wanted a private meeting, he felt it was concerning that the news media were not allowed in the SGC meeting.

“I was not happy at all with that,” he said. “I don’t really think [it] was a good message to send in this instance.”

Pringle said that because the negotiations with contingent faculty are still ongoing, many of the details of those negotiations need to be kept classified. She said that due to certain labor laws, the administration is very limited in what it can say publicly and was therefore unable to address many of the questions that students had.

“I think it might have been frustrating for people on occasion,” Pringle said. “But we are in negotiations, and we are hopefully in the final stages, so we really don’t want to jeopardize anything.”

Pringle would not comment on whether contingent faculty members were violating labor laws by publicly speaking about some of the details of the negotiations.

After the sessions with the administration and contingent faculty representatives, Conor Friend, Class of 2018 senator, announced that the college had agreed to provide students from countries included in President Donald Trump’s travel ban with free campus housing over the upcoming summer. This was a follow–up to the International Student Support Bill, which Friend and International Sen. Isabella Grullón Paz sponsored. They worked with Bonnie Prunty, director of the offices of Residential Life and Judicial Affairs and assistant dean for first-year experience, to achieve this. The only on-campus expense students staying will have to pay for is food.

“It’s what we sought out to accomplish, and we accomplished it,” he said. “It’s a victory for Ithaca College and the students [who are] worst off.”

The SGC also appointed Samuel Factor as the varsity athlete senator. Now, all the senate positions on the SGC are filled except the graduate student liaison position.