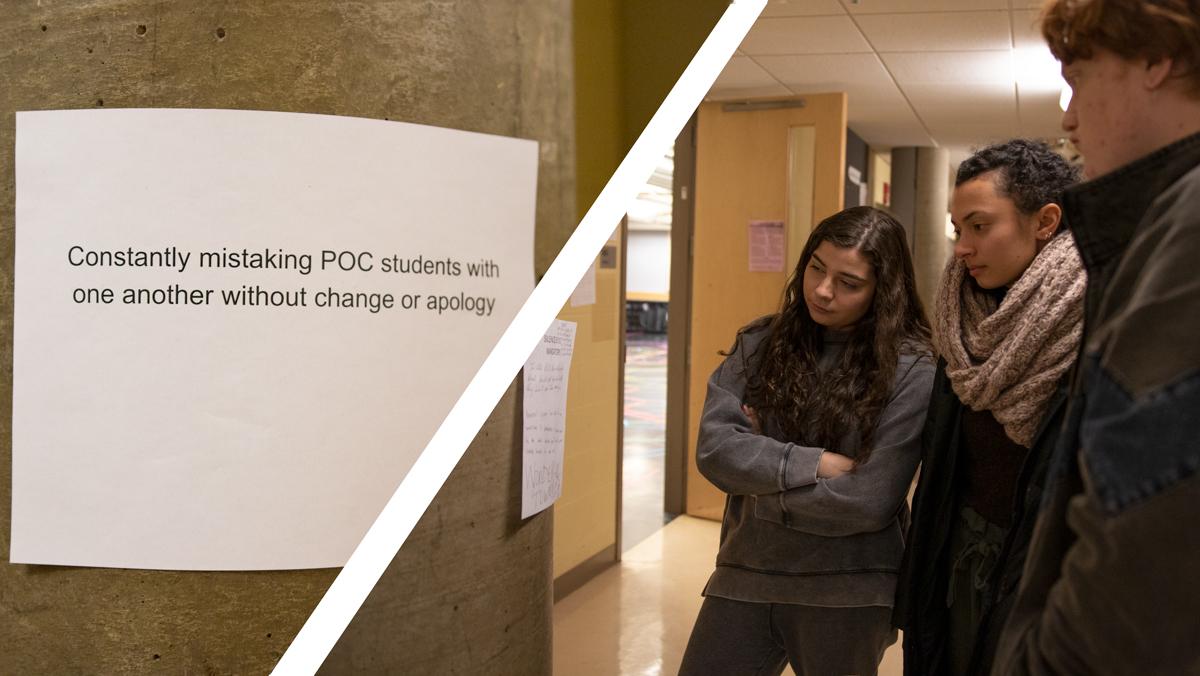 Update, Jan. 22: During winter break, an email sent Jan. 17 by Cornish and Rosanna Ferro, vice president of student affairs and campus life, explained the efforts in place and upcoming plans to address the racially charged incident as well as other similar micro– and macro-aggressions occurring in the community. The goal is to “ensure that our community is collectively held both responsible and accountable for upholding the college’s values and states commitment to diversity, equity and inclusion,” according to the email.

Before scheduling the open discussion, Cornish, Ferro and Chris McNamara, chair of the Ithaca College Faculty Council and clinical associate professor in the Department of Physical Therapy, will be meeting with executive boards of people of color organizations on campus so they can share their experiences and discuss their concerns.

“We recognize — and emphasize — that these are only the beginnings of our efforts,” Cornish and Ferro said via email. “We need to continue hearing from you, and we pledge to listen and collaboratively act to help improve the climate for the student learning and living experience at Ithaca College.”

Weidner said via email that, in addition to supporting the collegewide efforts to address racial tensions on campus, the theater department will also invite campus partners, professional facilitators and mediators to aid in guiding the dialogue moving forward.

“We need to do things differently, make adjustments, identify our blind spots and walk alongside those sharing the pain in their lived experience,” she said via email. “My promise is to do better next time and every time. When I make mistakes, I will keep showing up, and I will remain committed to doing the work, without believing that I alone can fix it.”

She also said she strives to keep the community updated and encourages students to reach out for support.

The email sent by Cornish and Ferro on Jan. 17 detailed proposals raised by faculty, staff and administrators at a meeting at the end of last semester, including requiring training for all faculty and staff, having mandatory fourth–hour seminars dealing with inclusion and diversification of the curriculum, implementing policies that clearly articulate expectations when micro and macro aggressions occur inside and outside the classroom and promoting the Bias Impact Reporting Form as a tool for accountability.

The email also mentioned programs in the process of being implemented by the Center for Faculty Excellence that will address issues, including inclusive search training for chairs of faculty search committees to increase diversity in search pools and increase the likelihood of diversifying the faculty and an Early Career Institute to help tenure-eligible faculty develop strategies to enhance teaching and learning. There will be a new faculty orientation for all faculty; and workshops on diversity, equity and inclusion with the offices of Intercollegiate Athletics and Recreation Sports led by Paula Ioanide, associate professor in the Center for the Study of Culture, Race and Ethnicity, according to the announcement.

Additionally, the announcement said the Campus Climate Action Group will also be revising its diversity statement to be used as a tool for engagement, instruction and accountability. The group will hold an open session in February to obtain feedback on its draft.

The Center for Faculty Excellence will be housing a year–long stay of the Institute on Antiracism and Equity, which will host up to 20 faculty participants who will work throughout the school year and summer to define expectations in their departments and schools. The details of the program are still being ironed out, according to the announcement.

Original Story, Dec. 18, 2019: Ithaca College students and members of President Shirley M. Collado’s senior leadership team have responded to the racially charged incident that occurred in a senior-level theater arts seminar Nov. 21. The scenario was made public Dec. 11 when The Ithacan published an article detailing the event.

During the class incident, lecturer Anne Hamilton asked her students to write racial slurs, including the N-word, on the classroom whiteboard. The scenario evolved into a verbal altercation between Hamilton and students of color in the classroom. After students raised concerns to Catherine Weidner, professor and chair of the Department of Theatre Arts, the students received an email the same day stating that Hamilton was removed from teaching the class, according to previous reporting in The Ithacan.

In response to the incident, three students from the class made a display Dec. 12, and they posted quotes and scenarios from recent academic years on the lower hallways of the Dillingham Center. Collado, Melanie Stein, dean of the School of Humanities and Sciences, and La Jerne Cornish, provost and senior vice president for academic affairs, walked around the Dillingham Center on Dec. 13 to hear from students about racial incidents in the classroom. In an email sent to the campus community Dec. 13, Cornish said the college is working to address its failures in creating a welcoming environment for all students.

The display put up Dec. 12, titled “A Manifesto of Visibility,” was created by seniors Jada Boggs, Avery Lynch and Roxy Matten as part of their final project for their Contemporary Developments in Theatre class with Hamilton.

“We want to make clear our belief in transparency, honesty and accountability regarding the misogynistic, sexist, racist, ableist and other discriminatory or otherwise derogatory words and actions of current and former faculty, staff and students of Dillingham,” the students wrote in the display. “And like our poster, these incidents stick to the walls of Dillingham like grime. They spread but are never cleaned up.”

Boggs said via email that she, Lynch and Matten do not have further comments beyond what was written in their manifesto.

“This is now the community’s voice, not just ours,” Boggs said via email. “Our project sparked it, but it has turned into something much bigger, which is understandable, and we support the students 100%.”

Some of the quotes and scenarios on the board read: “White male faculty member to a black female student: ‘Act more sassy,’” “Holding a meeting about microaggressions where a student of color was told to stop being mean to white people,” “Male director explaining to a female student what happens emotionally to a woman when she is assaulted” and “Female-identifying students told to lower the pitch of their natural voices in production to ‘sound stronger.’”

The display also had pieces of paper with pens available for students to write responses about their experiences and feelings on the issue. Additions included “Speak Up” and “SILENCE IS NOT MANDATORY.”

Cornish sent an email to the college community Dec. 13 responding to the incident in Hamilton’s classroom and “ A Manifesto of Visibility.”

“Prompted by a classroom incident that took place earlier this semester, our students in the Department of Theatre Arts have sent a powerful message that they will no longer accept an atmosphere that allows hurtful and derogatory words and behaviors to go unchecked and without consequence,” Cornish said in the announcement. “They are demanding that this institution both acknowledge this culture and take action to bring it to an end.”

In response, Cornish said, she gathered a group of approximately two dozen community members including deans, faculty and Student Affairs and Campus Life staff to discuss the issues leading up to this incident. She said in the announcement that adherence to the values of “diversity, equity and inclusion” continues to be paramount in the strategic plan’s Campus Climate action group.

Cornish also acknowledged that these events are not isolated to the theater arts program or the school of humanities.

Stein echoed this sentiment via email to The Ithacan on Dec. 11.

“I wanted to make sure you are aware that for the School of Humanities and Sciences—and the college as a whole—creating a safe and welcoming environment for our students is of paramount concern,” she said via email. “We strive to encourage and foster classroom conversation that sparks creativity and innovation, but we never want it to cross the boundary where it veers from our commitment to the values of diversity, equity and inclusion.”

This is not the first time prominent action against racial injustice has been present on the college campus. During the 2015–16 academic year, a series of student-led protests against institutional racism took place. The events prompted former president Tom Rochon to step down from his position in July 2017.

Most recently, a Snapchat posted by an Ithaca College student in which she used the N-word went viral. In response, the campus administration held an open conversation for the campus community to address issues of race and claiming the N-word. However, few students attended the open meetings related to the incident, as previously reported by The Ithacan.

Cornish said in the announcement that she applauds students for bringing attention to the issue and encourages students to continue to let the college know when it is falling short.