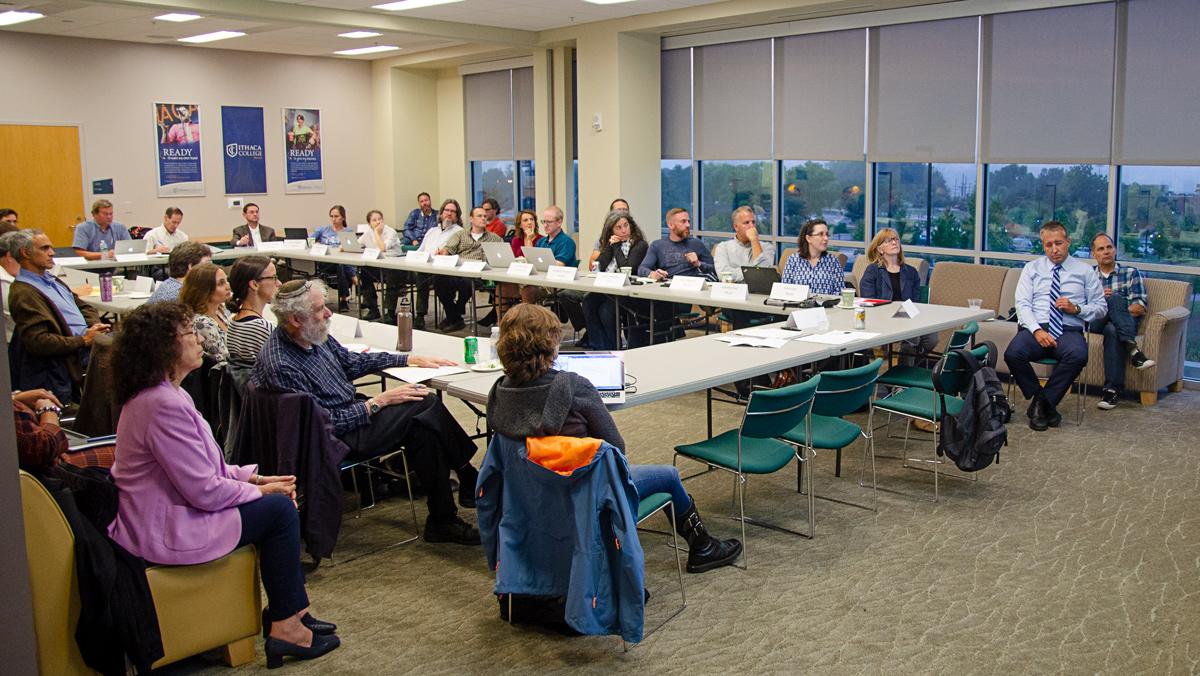 Kristen Harrison/The Ithacan
The Faculty Council endorsed the resolution at its March 10 special working group meeting. Chris McNamara, clinical associate professor and clinic director in the Department of Physical Therapy and chair of the Faculty Council, said in an email that the vote to endorse the resolution was unanimous.
By Ashley Stalnecker — Senior Writer
Published: March 18, 2021

In response to faculty and staff terminations made through Ithaca College’s Academic Program Prioritization, the Humanities and Sciences (H&S) Faculty Senate drafted a resolution that calls for the college to provide resources for terminated faculty members.

The Faculty Council endorsed the resolution at its March 10 special working group meeting. Chris McNamara, clinical associate professor and clinic director in the Department of Physical Therapy and chair of the Faculty Council, said in an email that the vote to endorse the resolution was unanimous. The draft was submitted to La Jerne Cornish, provost and senior vice president for academic affairs, and Hayley Harris, vice president for human resources and planning.

Claire Gleitman, women’s and gender studies coordinator, professor in the Department of English and president of the H&S Faculty Senate, said Cornish emailed her an acknowledgment of the resolution and assurance that it will be considered. President Shirley M. Collado and Cornish approved a plan to terminate 116 full-time equivalent faculty positions amid the COVID-19 pandemic.

“Those faculty and staff members who are losing their jobs, either immediately or in another year, are going to be facing a terrible economy and, for a while now, the continued impact of the pandemic,” Gleitman said via email. “It is hard to imagine a more grueling time to find oneself suddenly unemployed. We felt that, as a matter of decency, the college should do whatever it feasibly can in order to mitigate these difficulties.”

In the document, the H&S Faculty Senate calls for an extension to family dependent tuition remission for at least four years beyond the end of the faculty or staff member’s contract. This covers the cost of tuition for dependents, like children of college employees. Additionally, the document states that faculty and staff members currently eligible for free tuition should retain the benefit for at least four years from their point of termination.

To assist with the job search process in a competitive climate for academic jobs, the resolution also calls for terminated employees to keep full access to the library, email and Zoom for one year following their termination. The resolution supports professional development assistance for employees through the Office of Human Resources, Career Services, the Center for Faculty Excellence and other relevant offices.

Finally, the document asks that in the future, instead of conducting a lengthy and expensive national search for non-tenure eligible notice (NTEN) faculty, departments be granted permission to rehire terminated NTEN faculty.

Currently, the administration suggests terminated professors refer to a resource document that is accessible to faculty only on a Frequently Asked Questions page of the APP website. Dyani Taff, lecturer in the Department of English, who will be terminated, said that the document is not helpful and that she had difficulty accessing it. The resolution would provide the administration with a more humane termination, Taff said.

She said the extension of email and library resources could be especially helpful, as she is writing a book and is utilizing several publications from the library.

“This is good, solid help that I would appreciate,” Taff said. “I’m pretty sure they’re just going to say no.”

James Miranda, lecturer in the Department of Writing and Contingent Faculty Union chair, said he is concerned that the resolution is not geared more toward contingent faculty members. For Miranda, the loss of his position is a financial concern. He said he is not sure if he can continue to keep his daughter in her current school due to the cost.

“I wish we had maybe been consulted or brought in a bit because we’re already doing some of this negotiating,” he said.

Miranda said the Contingent Faculty Union proposed a memorandum of understanding in March 2020 when faculty were concerned with initial pandemic-related layoffs.

In the memorandum, he said the Contingent Faculty Union asked for a quicker turnaround of non-renewal letters, reference of COVID-19 in the letters and an 18-month extension of library and Netpass resources compared to the resolution’s one year request. He said severance pay could be another helpful addition to the resolution.

“If you’re going to let these people go in the midst of a pandemic, there should be some kind of severance that the college is really willing to put out there as a gesture of good faith, and there’s just been no talk of that at all,” Miranda said.

In response to the memorandum, Miranda said the administration said that the college is not legally obligated to provide such assistance to terminated faculty and staff.