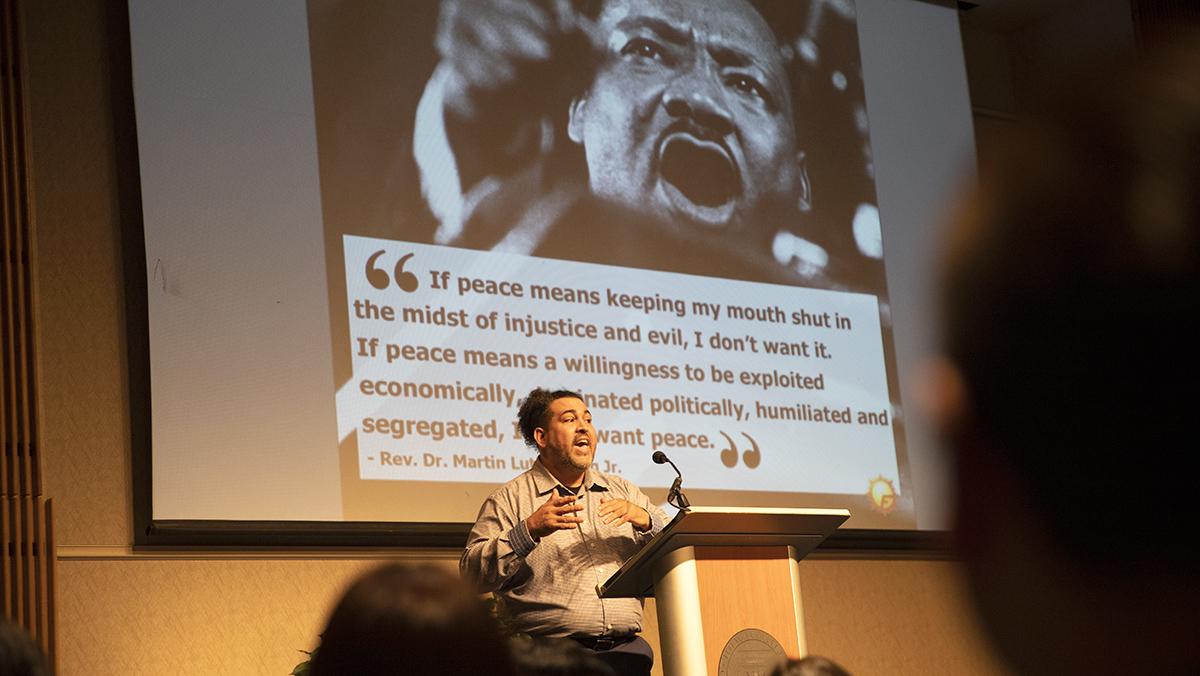 Leila Marcillo-Gomez/The Ithacan
Michael Benitez Jr., vice president for the Office of Diversity and Inclusion at Metropolitan State University of Denver, came to Ithaca College on Aug. 21 to give a keynote presentation about anti-racism and advocacy work.
By Lorien Tyne — Assistant News Editor
Published: August 23, 2022

Ithaca College students and employees filled Emerson Suites on Aug. 21 to listen to Michael Benitez Jr., vice president for the Office of Diversity and Inclusion at Metropolitan State University of Denver, speak about anti-racism and advocacy.

The Ithaca College Center for Inclusion, Diversity, Equity and Social Change (IDEAS) and New Student and Transition Programs (NSTP) collaborated to bring Benitez to the college. Benitez presented “Embracing Diversity and Fostering Inclusion Through Critical Conversations and Actions” as part of Fall 2022 Orientation, but the event was open for the campus community to attend either in person or through a live stream. About 200 campus members were at the event in person. For freshmen, the keynote was a part of their orientation and added to the conversations that orientation leaders had been facilitating in the week leading up to Benitez’s talk.

“Diversity, equity, inclusion, belonging, all these words that can mean everything but absolutely nothing at all,” Benitez said. “It depends on the action behind it. It depends on how we’re willing to embrace the convergence of the conversations. You as first-year students have an opportunity to derive what this looks like. For the next four years you have an opportunity to transform or help shape this community.”

Benitez began his presentation by creating a foundational understanding of advocacy work, racism and privilege. He said white supremacy does not only exist in extreme examples like neo-Nazis or the Ku Klux Klan, but can also present itself in subtle ways, like microaggressions that are more indirect discriminatory behaviors. He said this is why it is so important to be self-aware and attentive toward one’s actions and one’s own identities and how they function in a society that places whiteness at the top.

He also explained that anti-racism is about uplifting everyone, not just brown or Black people, because by lifting up everyone at the bottom, all others benefit too.

The keynote is slated to be the first in a series of IC Day of Learning events taking place during the 2022–23 academic year. President La Jerne Cornish said there needs to be more opportunities — like Benitez’s keynote — to have conversations about diversity, equity, inclusion and belonging.

“Too often we have one event, and that’s the signature event, and then we pat ourselves on the back because we did that one thing,” Cornish said. “This work never ends, … so this is our way of continuing the conversation that began last spring.”

Mame Ndiaye, assistant director of NSTP, said during the question and answer portion of the keynote that she has grown used to code-switching while working in higher education, meaning she adjusts certain behaviors, like dialect, to fit into the most accepted way of being in a society. She asked Benitez how he maneuvers through the politics of higher education when, like her, he has identities that fit outside the norm of whiteness.

“Navigating my identities and battling which identity I want to use at that moment — coming from a first-gen immigrant family, Senegalese Americans — and always having to navigate predominately white spaces — it’s not a challenge, but it’s something that I constantly have to deal with every day,” Ndiaye said.

Benitez said it is important to be one’s authentic self but it is also OK to present oneself differently depending on the environment. He also said that, for Ndiaye, there may be different reactions and repercussions of not code-switching that exist because she is also a woman.

“When I went into academia, … I always took pride in carrying myself in a very particular aesthetic that was truly me unapologetically, but I was also willing to bear the consequences of that,” Benitez said. “It didn’t always work out all the time. … I don’t feel like most women can show up unapologetically without the consequential difference of power.”

Some students in the audience, like freshman Caleb Kaufman, brought up questions to Benitez about discussing anti-racism and privilege with others.

“I had a question about how to discuss topics like this with family members because, at least with my family, … they have difficulty understanding how [racism] still impacts us today,” Kaufman said.

Strategic questioning is the tool Benitez suggested when speaking with others about topics like anti-racism and equity. He said when he has different viewpoints from someone else, he asks critical questions to encourage them to reflect through their own responses.

“At minimum if your spirit is like ‘at least I made an effort to just gently address it and put my love behind it,’ well, that’s really what matters,” Benitez said.