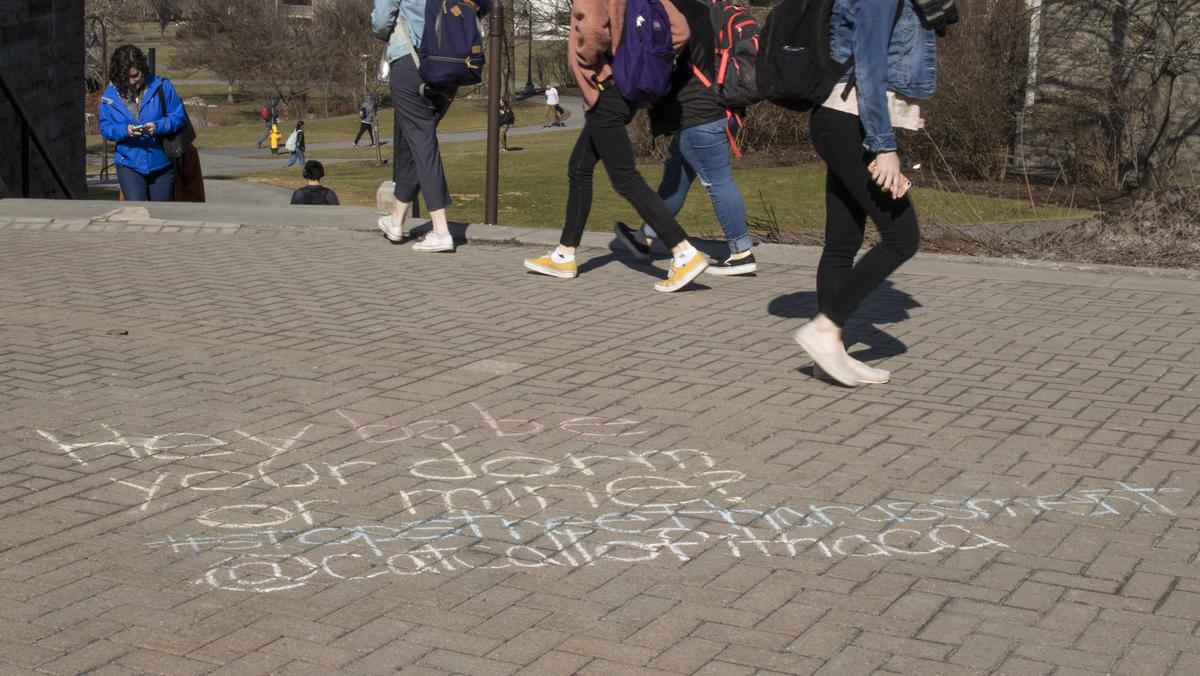 Jackie Marusiak/The Ithacan
Examples of catcalls are written in chalk near the Ithaca College Library. They are a part of the Catcalls of Ithaca Instagram campaign, which seeks to raise awareness about forms of sexual harassment that occur on campus.
By Alexis Manore — Staff Writer
Published: March 27, 2019

Between the Ithaca College Library and the staircase to the Towers residence halls, the phrase “Hey babe, your dorm or mine?” is written on the ground in brightly colored chalk.

“Oh my god,” a male student who stopped walking to stare at the drawing said.

“If you have a problem with it, come talk to me,” junior Corinne Cooper, creator of Catcalls of Ithaca, said.

Being unapologetic is a pillar of Catcalls of Ithaca, a new Instagram account and campaign dedicated to calling out street and sexual harassment on the college’s campus. Cooper created the account, which displays sidewalk–chalk art written on campus walkways quoting catcalls that students on campus have received, and began posting to it Feb. 25. Cooper said the purpose of the account is to give a voice to people who have been catcalled.

“It calls people out — it makes people feel heard,” Cooper said. “Nobody wants to be catcalled; nobody wants somebody to say something rude and degrading to them during the middle of their day. It’s not right.”

Cooper said the students who send her stories of harassment are kept completely anonymous and confidential. She said she receives the stories from direct messages on the Instagram page, as well as through email, but students do come up to her in person and tell her their experiences with harassment as well.

Cooper said the project is inspired by an Instagram page called catcallsofnyc, which posts about harassment in New York City. But, Cooper was also inspired by the Introduction to Women’s and Gender Studies class that she is currently enrolled in at the college.

“I’m taking a women and gender studies class, and for the end of the year project, we have to do a zine, which is a feminist magazine that gets information out there where you wouldn’t normally find it,” Cooper said. “I talked to the girl that runs [catcallsofnyc], telling her that I want to try to make it a movement and try to get it out more and on college campuses.”

Cooper said catcalling is only one example of sexual harassment that occurs on campus that often gets overlooked.

“Whether it’s getting drugged at parties, which is pretty common, or sexual assault, either on or off campus, … it just has to stop,” Cooper said.

“I think that it’s a really interesting way to do it, like ‘guerilla’ tactics of art or activism in the streets,” Gardner said. “Especially in the spaces that people are walking and in public spaces to call it out, even if it’s not an overt thing, and putting it out to reclaim those spots and make it known — I think it’s really smart.”

Though catcalling can seem harmless to the perpetrator, Gardner said it is actually a form of sexual harassment. She said she thinks of catcalling as a breach of consent and miscommunication that can lead to people feeling hurt and uncomfortable.

“If you’re comparing catcalling, it’s obviously a bit different, but the person who is doing it is thinking, ‘No, it’s affirming, it’s telling someone they look great,’” Gardner said. “That could be the way you’re thinking about it, but the way other person is going to internalize that interaction could be the same traumatizing sort of feeling.”

She said she also believes catcalling maintains harmful beauty ideals, which dictate that women have to look a certain way in order to be found attractive.

“It perpetuates certain beauty standards or the way that certain female bodies are fetishized,” Gardner said. “Other bodies are catcalled, of course, but I think that, too, is perpetuating the way that we see beauty as one sort of thing.”

Junior Nikole Moore said she thinks the chalk drawings are a creative way of addressing the issue of street harassment, and that it also speaks to personal experiences she has had herself.

“I think it’s a really interesting way of dealing with the issue,” Moore said. “I was actually catcalled by a Domino’s delivery guy in the first part of the year, so I would say it’s relevant, even in this area.”

Junior Samantha Butlien said that she likes Cooper’s use of social media to combat catcalling and that she and her friends have been catcalled, so she appreciates the statement Catcalls of Ithaca is making.

“I think that makes a really powerful statement, especially bringing in something as powerful as social media because everyone sees it,” Butlien said. “I think it’s very important to draw attention to women being catcalled; it’s obviously an issue.”

Cooper said she hopes someone will carry on Catcalls of Ithaca after she graduates in 2020 to keep raising awareness about street harassment on campus.

“I have a lot of dreams that I want to turn into something big,” Cooper said. “Right now, it’s just me working on it, it’s my project, but I really would like someone to carry it on when I graduate. … Catcalls aren’t going to go away, and this shouldn’t go away either.”