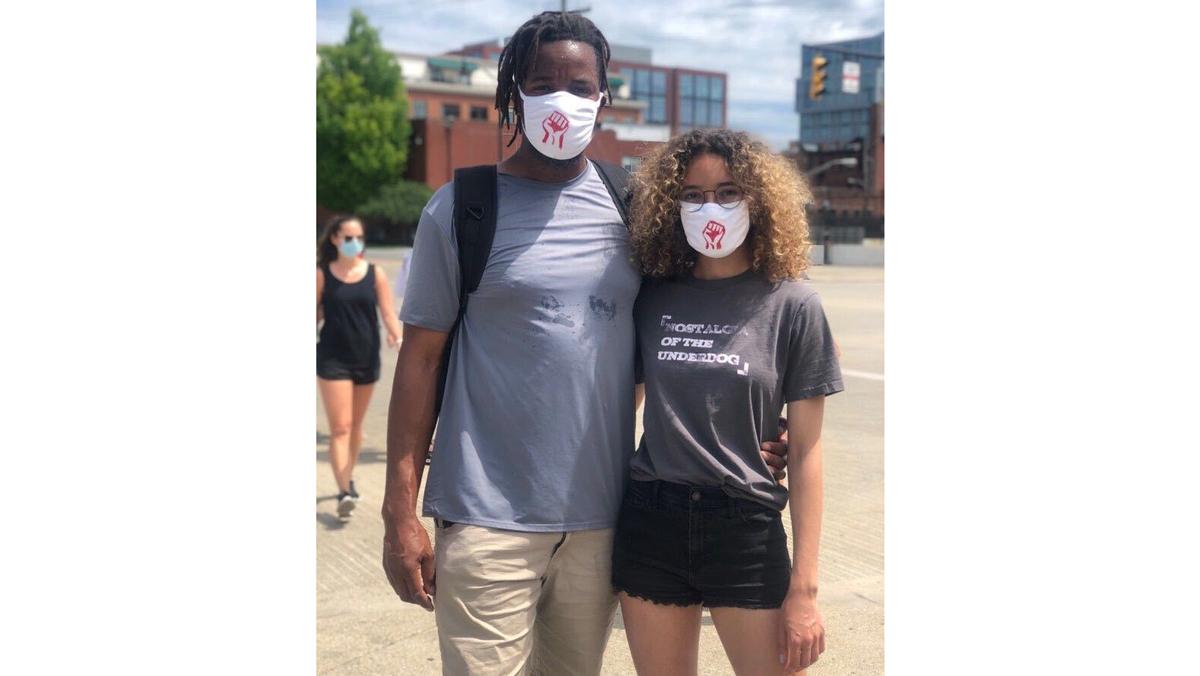 Courtesy of Olivia Carpenter
Rising junior Olivia Carpenter made face masks featuring a raised fist for herself and her father, Zavean Carpenter, to wear at a protest.
By Alyshia Korba — Assistant News Editor
Published: June 27, 2020

Ithaca College students are participating in local protests across the country to speak out against police brutality and racism against Black individuals.

Nationwide protests began May 26 in response to high-profile cases of police brutality and the murder of Black individuals, including the killings of George Floyd, Breonna Taylor and Ahmaud Arbery just this year. Protests have been held in all 50 states and U.S. territories, and the Ithaca community has held racial justice rallies every Sunday since May 31. Ithaca College also added to the national conversation by holding a virtual discussion for students about racial injustice June 4.

In Columbus, Ohio, rising junior Olivia Carpenter joined hundreds of protestors at the state capitol building, the Ohio Statehouse, to protest police brutality June 6. The protest drew a large police presence but remained peaceful, Carpenter said. She said she chose to attend the protest because she has experienced discrimination as a Black woman.

Carpenter said one moment that stuck with her from the protest was when the protesters all laid down on the pavement for 8 minutes and 46 seconds in honor of Floyd, representing the amount of time that Derek Chauvin, a former Minneapolis Police Department officer who was later charged with second degree murder and second degree manslaughter for killing Floyd, knelt on Floyd’s neck.

“It was hot outside so I might’ve burned my skin, but it doesn’t matter,” Carpenter said. “It doesn’t matter. He didn’t choose to lay down on the ground.”

She said she was surprised to see so many people supporting the movement, especially so many white people.

“I think it’s extremely important that white people and people with natural privilege come out for the Black folks,” Carpenter said. “Nothing’s actually going to change if it’s just Black people screaming into a void because the people that are doing the racist things are white police officers, so they’re not going to have anything changed if they just see Black people, who apparently they view as less than people, saying something. They don’t care.”

Carpenter said she saw police engaging in conversation with activists at the protest she attended, but was disappointed to see that none of these officers were white. She said she thinks it would be more effective to have discussions about race with white police officers because they have not experienced racism like their Black coworkers.

“You take your uniform off at the end of the day, so when that Black police officer takes his uniform off at the end of the day, he’s a Black man and he will face the exact same issues I will face, or worse because he’s a man,” Carpenter said. “When that white police officer takes off his uniform, he can go back to his life where he has more privilege than us. So the fact that there were police officers listening but they were only ones that already experience racism was pretty sad to me.”

Rising junior Emma Robinson said she also noticed many white people at a protest she attended June 4 in Clinton, New Jersey.  She said she felt that her presence as a Black woman in a predominately white protest served as a reminder of what the protesters are fighting for. She said she participated in a protest June 6 in Flemington, New Jersey, which had a higher attendance of Black people, which she said made the message of the protest feel stronger.

“In the first protest I attended my presence there was more of a reminder that Black lives matter,” Robinson said. “You can’t be self-congratulatory and say we’re a community full of love when I’m here and I don’t feel safe necessarily, so the first one I felt like I was still fighting to be seen and the second one was really kind of a reminder to me of what amazing things can be done when you are seen and when you are valued and when you are centered as a Black person in America.”

Robinson said she wanted to protest in these towns because she grew up nearby and wanted to promote change in her local community.

“I’m in a position that I, very thankfully, can attend protests without having to fear for my health or what would happen afterwards, so I definitely wanted to go to some and these two specifically were in my community,” Robinson said. “Those are the people I have gone to school with, the people I’ve grown up seeing, and I thought it was really important to spread my voice there locally and just let my officials know that I’m here and I care and I matter.”

Rising senior Joe Friedman was involved in a Wisconsin protest that has received national media attention. On June 6, Wisconsin attorney Stephanie Rapkin was videod spitting on Eric Lucas, a Black 17-year-old, at a protest. The next day, Friedman said he was peacefully protesting by writing chalk messages outside of Rapkin’s home, like “I spit on a child. How dare you!” Rapkin then came out of her home and shoved Friedman.

Friedman recorded the altercation and Debra Brehmer, Friedman’s mother, posted the video on Facebook. Rapkin was arrested twice that weekend and faces charges of disorderly conduct with a hate crime enhancer and battery to a law enforcement officer, according to the Wisconsin Circuit Court Access.

“Ms. Rapkin would like to apologize because it’s the right thing to do,” Luczak said via email.

Friedman said this widespread movement against police brutality is unlike anything he has experienced before.

Along with attending protests, Robinson said she has been calling her local elected offices and police departments to express her concerns about the law enforcement system. Robinson said talking to law enforcement and lawmakers, signing petitions and donating to advocacy organizations is a good way for people to support the movement, especially if they are unable to attend a protest.

“Protesting is in your face, it’s loud, it lets people not ignore the issue, but unfortunately protesting is not accessible to everybody, in terms of physically protesting,” Robinson said. “I think it’s important, but I think it’s really important to support these other forms of advocacy so as to not shame people who cannot physically show up to protests.”

Robinson is also encouraging change in her local community by trying to develop a curriculum for her local schools that will feature activists in history for Black, Indigenous and people of color (BIPOC), LGBTQ individuals and people with disabilities.

“I realized that I never really got any stories of Black success or Black liberation or Black resistance that wasn’t neat and orderly and kind of the Disney-fied version,” Robinson said. “It’s easy to start a petition and say we want change, but I think it’s a lot more constructive and instructive to help provide some of those resources and make it a collaborative effort and let them know how that’s impacted me not hearing those stories of success.”