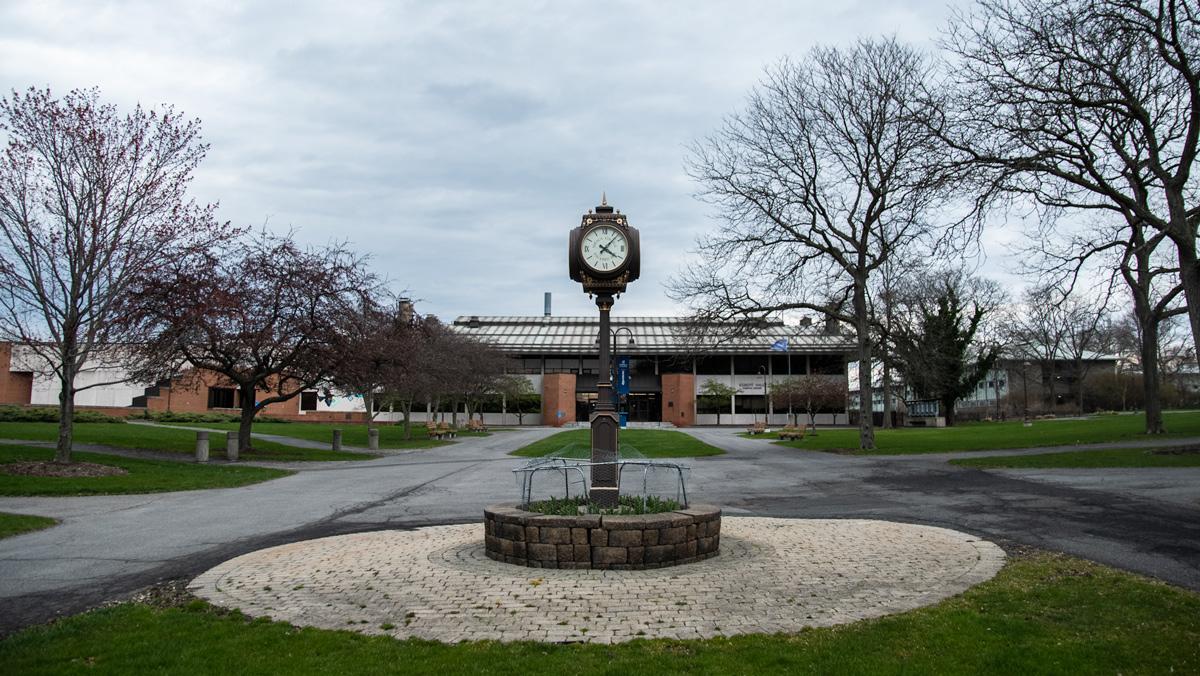 File Photo/The Ithacan
The discussion, “Creating Space for Reflection and Action,” was held June 4 via Zoom and was meant to give students, faculty and staff a space to reflect on racism in America and what the college community can do to support its black students.
By Caitlin Holtzman — Assistant News Editor
Published: June 9, 2020

Members of the Ithaca College community gathered to have an open discussion about racism and violence against black people in the United States, on campus concerns and what needs to be done in the college community.

The discussion, “Creating Space for Reflection and Action,” was held June 4 via Zoom and was meant to give students, faculty and staff a space to reflect on racism in America and what the college community can do to support its black students. The meeting came 10 days after former Minneapolis police officer Derek Chauvin killed George Floyd, a black man, by kneeling on his neck for approximately nine minutes. Floyd’s death has been a catalyst for people around the nation to come together to protest the killings of black individuals.

“Tonight we gather to hear your voices,” Hierald Osorto, director of religious and spiritual life, said. “We also gather in lament of lives cut short by racist violence. George Floyd in Minneapolis, Breonna Taylor in Louisville, [Kentucky], Ahmaud Arbery in Brunswick, [Georgia], and so many, many more.”

The college — a predominantly white institution — is not immune to racial injustices. There are 341 black or African American undergraduate students enrolled at the college, compared to 4,238 white undergraduate students, according to the 2019–20 Facts in Brief. In Fall 2019, only 13.9% of faculty and staff members were people of color — the college does not provide further racial breakdown — and 80.9% were white, according to the Office of Analytics and Institutional Research.

There have been complaints of microaggressions that have been tolerated or perpetrated by faculty at the college over the past few years. Additionally, in November 2019, students in the Department of Theatre Arts class, “Contemporary Developments in Theatre,” were asked to write racial slurs on the board. In response, students created a display in the Dillingham Center expressing different racial incidents at the college that had occurred in recent years. The movement POC at IC was started in Fall 2015 in response to racial incidents that occurred at the college under former Ithaca College President Tom Rochon’s leadership. The group’s work led to his resignation in 2017. POC at IC was disbanded after.

Rosanna Ferro, vice president for student affairs and campus life, acknowledged that the college has not always supported black students but said that she is committed to helping students be heard and create change.

“I don’t sit here and claim to know exactly what our black students are experiencing,” Ferro said. “I just know that I hear you, and I appreciate you. You matter, and our commitment is to make sure, as much as we can, that your experience at Ithaca College will be different.”

Members of the campus community were given time to share their experiences as black people in America and at the college. Some speakers expressed fear, grief and anger toward the acts of police brutality against black people, as well as empowerment as a result of people coming together for the Black Lives Matter movement.

Rising junior Amir Tazi said that he is feeling drained between the coronavirus pandemic and the fight against racism in the U.S. The college transitioned to remote learning March 17 because of the COVID-19 pandemic. He said that being at home all the time and not being able to be surrounded by friends to talk with them about what is going on is taking a toll on him mentally.

“When will black people be able to live in normality?” Tazi said. “When will I be able to not have to worry about outside powers influencing the way I choose to live my life?”

La Jerne Cornish, provost and senior vice president for academic affairs, also spoke to the attendees about the struggle of not being at the college during this time. She said Floyd’s death reminded her of Freddie Gray’s death. Gray, a 25-year-old black man, died in police custody because of a spinal cord injury in 2015. The officers restrained his hands and feet but did not secure him with a seatbelt in the back of a police van. Gray’s death led to protests in Baltimore and around the country. However, Cornish said that at that time, she was able to grieve with her students in person.

“I just want you to know that in my mind I see you, in my heart I hear you and in my arms I’m holding you,” Cornish said. “I love you, I’m thinking of you and I’m praying for us all.”

“I feel like it’s done a lot to the psyche of a lot of Americans, and that’s why we’re seeing the things we’re seeing now,” Gene said. “I really believe that we’re on the brink of something right here.”

He said he wants people to continue advocating for change but has heard people say they cannot wait for things to go back to normal.

“We don’t want things to be back to normal,” Gene said. “We have momentum right now, and we need to utilize that momentum.”

Gene and Tazi both said that they liked seeing people utilizing social media to share links and resources, but agreed that it cannot just be a trend for a week, nor can it be performative and just because they see others doing it.

Rising junior Sofia Meadows-Muriel stressed that there is an emotional struggle when it comes to advocating.

“You can forget that you can actually spend a day doing nothing,” Meadows-Muriel said. “Understand why it is vital to recharge before you fight whatever battle that may be.” 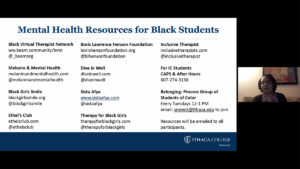 Meadows-Muriel also said she believes there need to be more resources coming from the Center for Counseling and Psychological Services (CAPS). Stephanie Nevels, mental health counselor at CAPS, said that CAPS is open all summer for appointments, crisis hours and has an after-hours counselor available in the evenings. The phone number for CAPS is 607-274-3136.

Rising junior Nile Gossa-Tsegaye spoke about growing up in Ithaca and taking part in the City of Ithaca’s black community versus the college’s black community. She said she felt that students of color organizations on campus were not cohesive.

“I think people have their mind in the right space, and everyone wants to make change because it’s really ostracizing to be a person of color in a predominantly white institution, but, at the same time, for a lot of students I know that they’re too scared to join organizations because they’re so cliquey,” Gossa-Tsegaye said.

Rising junior Leticia Guibunda discussed her experiences growing up as a black Latina in the U.S. after moving to the U.S. from Brazil when she was eight. She also talked about how difficult it is to see so much negativity in the world.

“I’ve been trying to stay as positive as possible during this time to just not let that feeling take away the happiness that we should all have in our lives,” Guibunda said. “This type of pain shouldn’t be the thing that overcomes us all.”

Belisa González, associate professor and director of the Center for the Study of Culture, Race and Ethnicity, discussed next steps and resources for students. One of the resources is the Honors Program Rapid Response Salons, which are events that have discussed the coronavirus pandemic and racial inequalities.

González also talked about creating affinity groups on campus. These groups would allow students with a common social identity to come together to discuss that identity, she said.

“Affinity work, I think, is really important during this time in processing what’s going on,” González said.

Collado spoke toward the end of the gathering. She said she knows there is work to be done and is willing to work to make a change.

“We know that this time, for us and for you, is really devastating,” Collado said. “To not have you on our campus, to be isolated when our country is so divided and in so much pain, it’s overwhelming and, frankly, no generation should be facing this, especially during a public health crisis.”