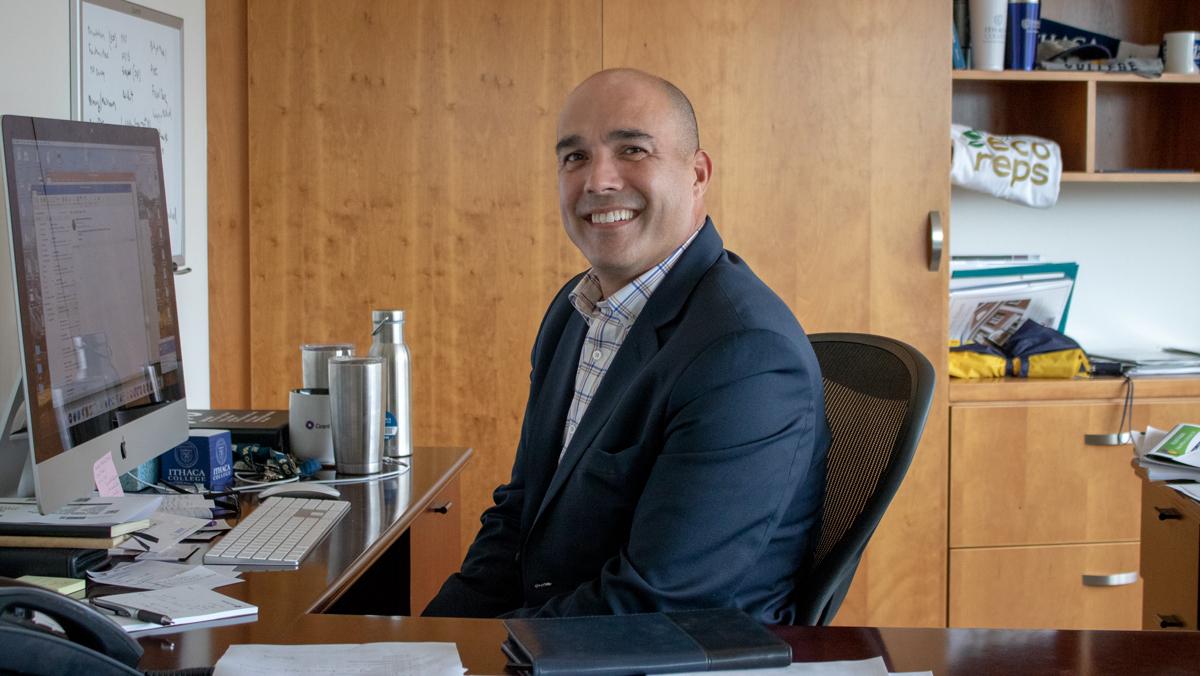 Caroline Brophy/The Ithacan
William Guerrero, vice president of the Division of Finance and Administration, said the college community should not be concerned about the decrease in the surplus.
By Sam Haut — Staff Writer
Published: September 19, 2018

Ithaca College’s surplus has dropped from $20 million to $5 million for the 2018–19 academic year.

Ithaca College President Shirley M. Collado attributes the decrease in the budget surplus to the college’s increase in financial aid awards, new technology, increases in faculty and staff benefits and deferred maintenance costs. William Guerrero, vice president of the Division of Finance and Administration, said increased financial aid and salary and benefits are the biggest factors in the decrease. Guerrero said although the decrease in the surplus may look concerning, it does not indicate financial trouble for the college.

Beth Reynolds, controller for the Office of Business and Finance, said $6.7 million from the $15 million went to salary and benefit increases, $6 million went to financial aid and a $1 million loss resulted from lower enrollment, from both a larger class graduating in 2018 and less freshmen attending the 2017-18 academic year than expected — which was partially offset by a tuition rate increase. The remaining million went to other miscellaneous costs. Reynolds said the exact effects of this decrease will not be clear until the next fiscal budget is decided in February because the lower surplus will give the college less money to invest in deferred maintenance, the endowment and other repairs across campus.

The $6.7 million from the operating budget was allocated toward salaries and benefits for contingent faculty members — who negotiated a deal with the administration last year before a threatened strike — mandated minimum wage increases for student employees, a 2.5 percent increase for faculty and staff salaries, new positions in the Division of Student Affairs and Campus Life, new hires in the president’s office and Fair Labor Standard Act equity adjustments.

Guerrero said the surplus is typically used to pay for capital projects including deferred maintenance and infrastructure renovations. As a result, the college will now have less money to address these issues. Reynolds said the college was aware of a decrease in the surplus in January, but it did not know the exact dollar amount until August. Additionally, Collado said at a student media press conference Sept. 6 that the decrease was forecasted years ago.

Reynolds said the budget has never fluctuated to this degree since she began working at the college as assistant budget director in 2004.

“I think it probably raised some eyebrows, and they [the board of trustees] were a little more cautious when approving the budget and just making sure we weren’t overbudgeting in certain areas,” Reynolds said. “There’s definitely less we’ll be able to do capital [project] wise because that surplus can’t go towards operating costs. It has to go a capital project or invest it in the endowment.”

Larry Goldstein, president of Campus Strategies, LLC, a management consulting firm that assists colleges and universities in improving developmental issues, said a decrease in a college’s surplus is not necessarily alarming.

“Fluctuation is not unusual, so if they had an enrollment fluctuation, for instance, that’s likely going to produce an impact on the bottom line,” Goldstein said. “It’s an unusual swing, but given the times, I don’t think it’s dramatic.”

Goldstein said he thinks a college should look to have a minimum surplus of around 3 percent. The college’s surplus is currently around 2 percent based on the 2018–19 budget, and Goldstein said it would be good to keep an eye on it.

“I would say the $20 million is a very comfortable surplus,” Goldstein said. “Five million dollars would cause me, as a former [chief financial officer], to pay attention. I believe 3 percent is the minimum surplus that you need to be safe with respect to the size of your operation. So to drop to 5 [million dollars], you drop below what I consider the minimum an institution like Ithaca should have to protect itself against an unanticipated shortfall.”

Goldstein said it is important to see if the trend in a decreased surplus continues because that would be concerning.

The cost to address maintenance issues is a problem being faced by colleges across the country, according to a report by Sightlines published in 2016. Sightlines is a company that has assessed deferred maintenance at the college since 2006.

Goldstein said keeping up with deferred maintenance is important for a college in retaining students. “You and your colleagues make judgments about where to go to school based on how the physical campus appears,” Goldstein said. “You also make a judgment every year whether you’re coming back, and if you were to notice that Ithaca stopped maintaining residence halls or stopped maintaining classroom buildings, and you didn’t feel the administration was giving a good answer for why that was happening. You might consider ‘Maybe I should go to school someplace else.’”

Q&A: New VP for finance and administration to focus on efficiency