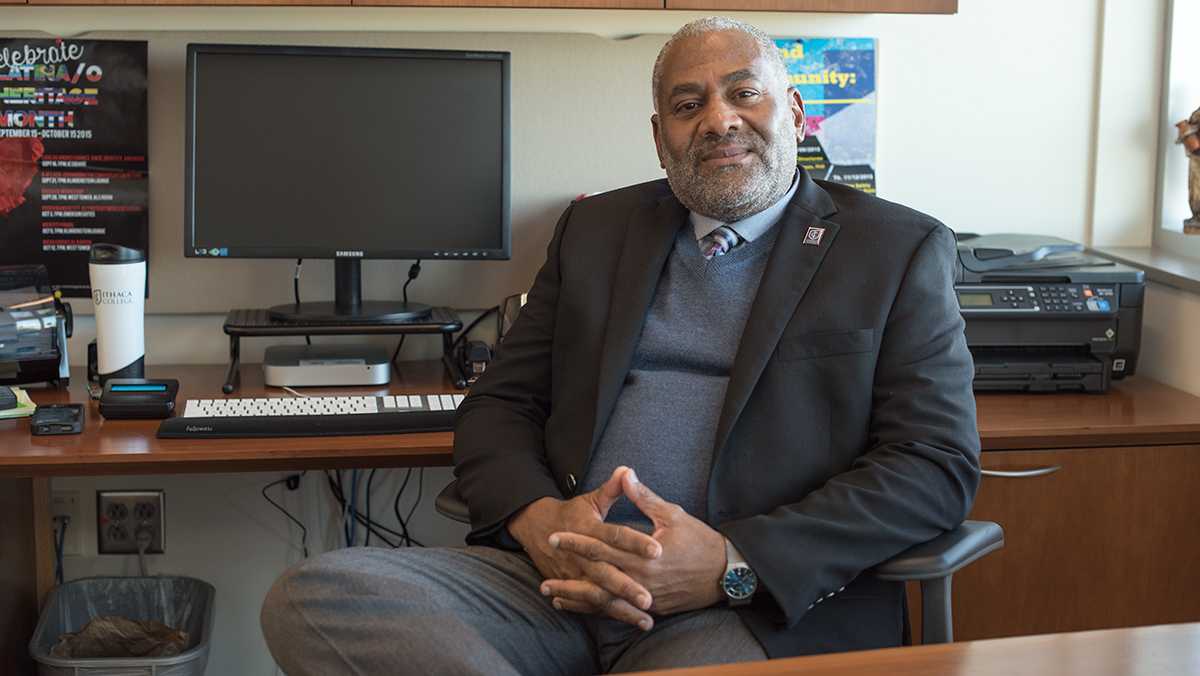 Roger Richardson, associate provost for diversity, inclusion and engagement, was announced by President Tom Rochon on Nov. 10 as the interim chief diversity officer. Richardson said the initial timeline for the diversity action plan may not be realistic.
By Elena Piech — Staff Writer
Published: March 2, 2016

In Fall 2015, Ithaca College set a timeline for addressing issues regarding diversity and campus climate. Although the plan covers a timeline of roughly 2 1/2 years, Roger Richardson, associate provost of diversity, inclusion and engagement and interim chief diversity officer, said it is not realistic for all deadlines to be made.

The “Action Items to Address Racism and Cultural Bias” plan features past, ongoing and future plans for addressing racism and cultural bias on campus. According to the projected timeline on the college’s website, updates will be posted within each action item on the timeline. January and February do not have posted updates.

“When you see these dates, your first inclination is ‘has this been done,’ and I think what I’m trying to get people to understand is we will achieve as much as we can within the time frame that these dates articulate, but there’s logistical challenges, and there’s processes that impact us being able to achieve these action steps within this time frame,” Richardson said.

The Office of Human Resources has organized and continues to organize training sessions, programs and retreats to inform students, faculty and staff about issues relating to diversity and inclusion.

According to the website, the January 2016 section of the timeline includes establishing a baseline program in cross-cultural awareness and effectiveness that will be required for all faculty, staff and administration. Additionally, the single goal of February was that all new employees, beginning in February, will be required to participate in the baseline training program within three months. Employees hired before February 2016 will have until May 2016 to complete this training. 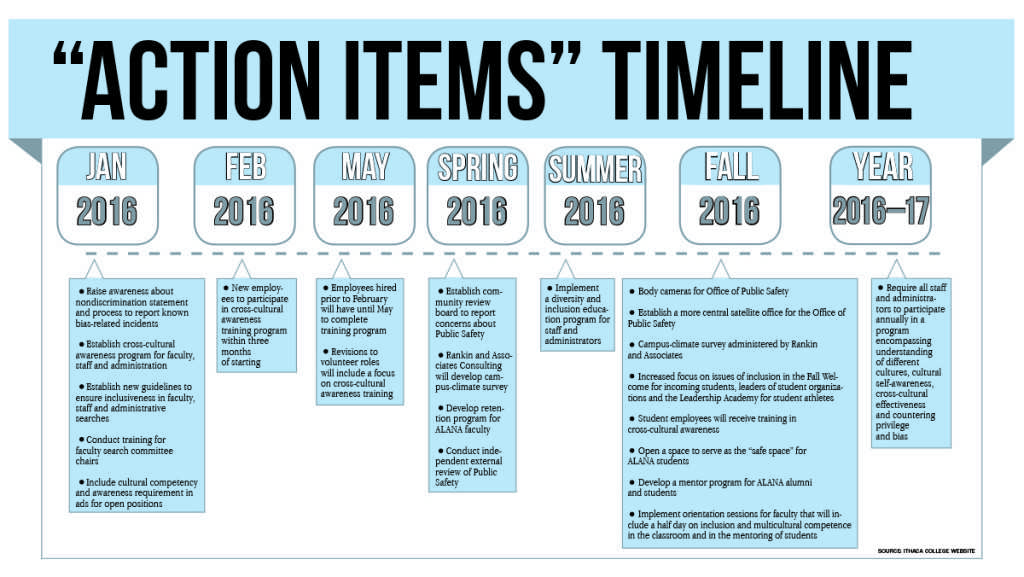 Although the timeline says the baseline programs are a requirement, Nancy Pringle, vice president and general counsel for the Division of Human and Legal Resources, said the current focus of Human Resources is to not force employees to attend the events.

“Our preference is not to use a hammer to get people engaged on this topic, which is why I think the vice presidents’ using the retreats was a really good strategy,” Pringle said. “We want people to be engaged. It is a journey.”

Richardson said although he believes Human Resources is on track, the February goal may not be met.

“You have to think about what that says,” Richardson said. “It says ‘all.’ Can you imagine the scale that that encompasses?”

Although Human Resources cannot yet relay the data, if the goal is not met, Richardson said, it is due to the department’s working with limited resources.

“HR has been working diligently to create workshops and seminars offering diversity,” Richardson said. “The goal is ultimately that all members of the community will have the opportunity to participate, but the volume that’s required to be able to meet that particular objective is something that we, meaning HR, has to utilize existing staff and outside consultants to meet that goal.”

Richardson said he is in a similar position to members in the Human Resources office with working two positions.

“I know I have to find a way to continue to do what I was expected to do, and then also incorporate these new action expectations into my portfolio as well,” Richardson said. “So I think we have to be realistic, and we have to commend people for the work that they’re doing and the additional work that they’re taking on.”

Benjamin Rifkin, provost and vice president for educational affairs, said the timeline was made based on ambition to make progress as soon as possible. However, they were not realistic for what needed to be accomplished.

“Some of the projects required a depth of consultation and review that could not be accomplished as quickly as we might have liked,” Rifkin said in an email. “For instance, the body-worn camera project for Public Safety officers had strong support from both students and the Office of Public Safety, but it is taking us longer than we had expected to review and consider policy on the retention of the video recordings made by those cameras.”

Michelle Rios-Dominguez, manager of diversity and inclusion in human resources, said the office is working to accomplish the timeline goals. The office’s current plan includes orienting new employees to diversity and inclusion learning components on the first day, 30th day, 60th day, sixth month and first year of their employment.

Rios-Dominguez said Human Resources cannot provide the total number of employees that has participated in diversity programs. She said programs offered by Human Resources include the Diversity and Inclusion Webinar Series and training sessions and learning opportunities.

“We have had 42 diversity and inclusion learning opportunities since September 2015, representing 545 filled seats,” Rios-Dominguez said. “I anticipate having over 1,200 attendees by the end of May.”

Although the Diversity Action Plan says the baseline training program was established by January, Pringle said Human Resources is using this semester as a trial run to find what plans and training sessions will work in the future.

“We made a commitment in the action steps that we would do two such programs this semester,” Pringle said. “Moving into next year, we’ll have a full scope of ‘Here’s what you need to do,’ and we’ve got a model that we’re working off of that’s been developed down in Human Resources on diversity and inclusion.”

Patricia Rodriguez, associate professor in the Department of Politics, said the college is not using an effective approach to engage students and employees.

“Diversity appears to be something to handle institutionally by putting money and lots of events and trainings related to diversity. But not much is being discussed about how we might be thinking about actual inclusion related to actual decision-making and not just input,” Rodriguez said via email.

Senior Dominick Recckio, Student Government Association president, said the current college community is not being engaged. As SGA president, Recckio spoke at the Athletics and Events Center event in October 2015, where the plan was first introduced.

“I only thought that the deadlines would be met if there was community buy-in,” Recckio said. “I sat there sincerely wishing that the entire community had been consulted over the past eight years to create something better, more community owned and more dynamic.”