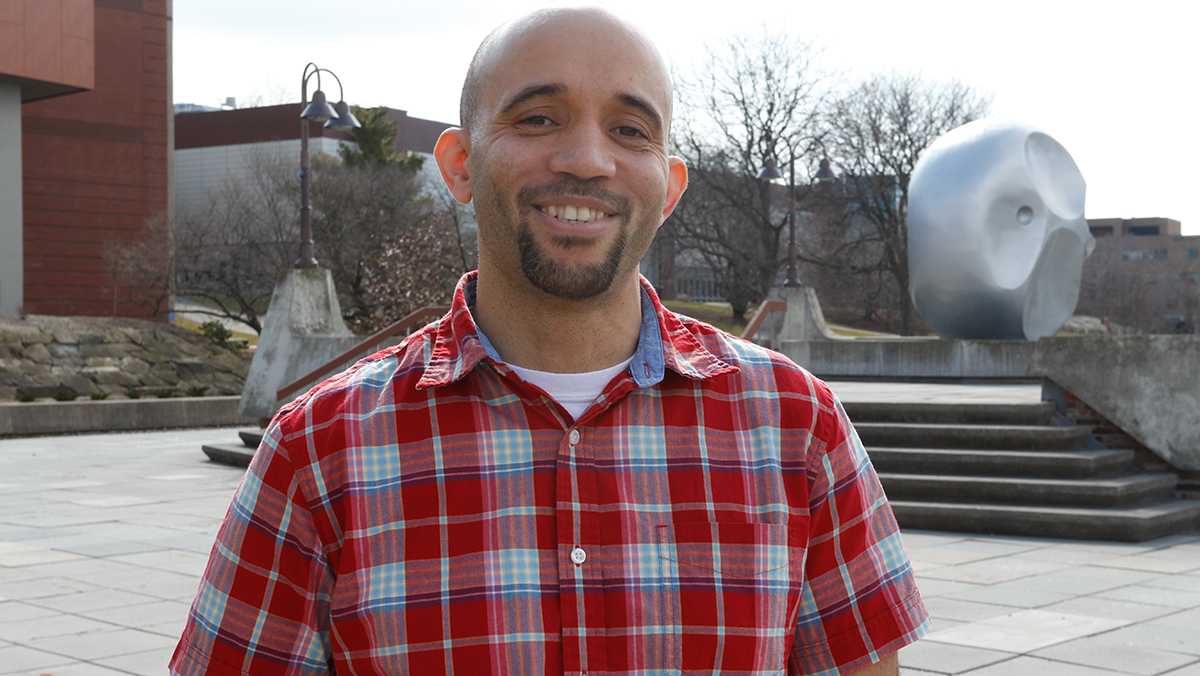 Yana Mazurkevich/The Ithacan
After finding a passion for literature that highlights issues of racial identity, Derek Adams, assistant professor in the Department of English strives to create a safe space for students of color in his own classroom at Ithaca College.
By Ana Borruto — Staff Writer
Published: April 3, 2016

Sitting on Derek Adams’ desk in the Muller Faculty Center is a copy of Percival Everett’s novel “I Am Not Sidney Poitier,” a story about a character who is consistently mistaken for Academy Award–winning actor Sidney Poitier. The character decides to travel the U.S. and discover who he is so people will stop labelling him as someone he is not.

Adams has Percival Everett on his list of black writers he admires, which includes Audre Lorde, Richard Wright and Toni Morrison. Wright’s piece “Black Boy,” Adams said, was one of the first texts he read that dealt with the issue of racial identity. From there, he eventually became interested in studying African-American literature.

“This idea of being moved between two worlds, I was always interested in what types of stories might be told about that,” Adams said.

This “two world” concept he refers to is something Adams, who is biracial, faced growing up.

“In my own youth — and this is peeling open some very painful scabs — I was discriminated against because I grew up in this all-white town,” he said. “I was the only black person in my immediate family. I never met my real father — that’s where I get this black portion of my racial identity — and being raised in a community like that, that was entirely white … I was beaten up almost every day. I was constantly reminded of how black I was.

Adams experienced these different “worlds” when he went from attending a mostly white school to one that had a larger black student population. He started being referred to as “Casper” and “Oreo,” which were names that, to Adams, emphasized his “whiteness.”

When Adams went to college, he took an English class where the students read “Black Boy.” Throughout college and into graduate school, Adams continued learning — mostly on his own — the materials he was interested in.

Adams said he actually failed his first college English course because of a professor who didn’t believe he could succeed academically.

“He wrote me a letter that said, ‘You won’t amount to anything as an English scholar,’” Adams said.

Adams continued taking English courses and spent seven years as an undergraduate. He said he was a better student in mathematics and politics, but later in his college career, he decided to become an English major.

“I said, ‘You know what, I’m going to do this,” Adams said. “In part because I wanted to prove that professor wrong, I became an English scholar.”

Adams came to the college after finishing graduate school at the University of Arizona. He put together a list of his top five schools to apply to, and Ithaca College was No. 1. He said the supportive community he came across during his visit is what sold him.

“It became an easy decision once I made it out here and had my campus visit,” Adams said. “The students are smart, intellectually engaging, asked some really brilliant and insightful questions during my teaching demonstration.”

Dan Breen, associate professor and chair of the English department, said he often hears good things about Adams from other professors in the department and from students who have taken his courses.

“One of the things that is really remarkable about Derek’s classroom is the atmosphere,” Breen said. “Derek doesn’t assign easy stuff. Not only is it difficult in kind of a formal way, but the texts that he chooses tend to address really challenging problems and questions.”

Michele Hau, a sophomore culture and communication major, took Adams’ course The Power of Injustice & the Injustice of Power, and when it ended, she continued meeting with Adams to discuss what was going on within the campus community regarding the POC at IC movement and no confidence vote for President Tom Rochon.

“There were a lot of people who weren’t really used to talking about race, and he made the concept or the uncomfortableness really palpable and really accessible for a lot of people to understand,” Hau said.

Last semester, Adams would regularly have conversations in his office with students, some lasting as long as three hours. He said being a faculty member of color during this time was one of the most exhausting semesters he ever experienced.

“A lot of them were struggling so greatly with issues that they were considering dropping out, transferring — they were upset, they felt apathetic, they couldn’t motivate themselves to go to class, they couldn’t stop crying,” Adams said.

Adams said he does not know how helpful he was, but he was able to provide a safe space for students to express their feelings without being judged.

“I feel like if I do nothing else in this position, being available to speak to students should be the thing,” Adams said. “All of you are the ones who make this place, this sort of empty structure, into a vibrant community.”