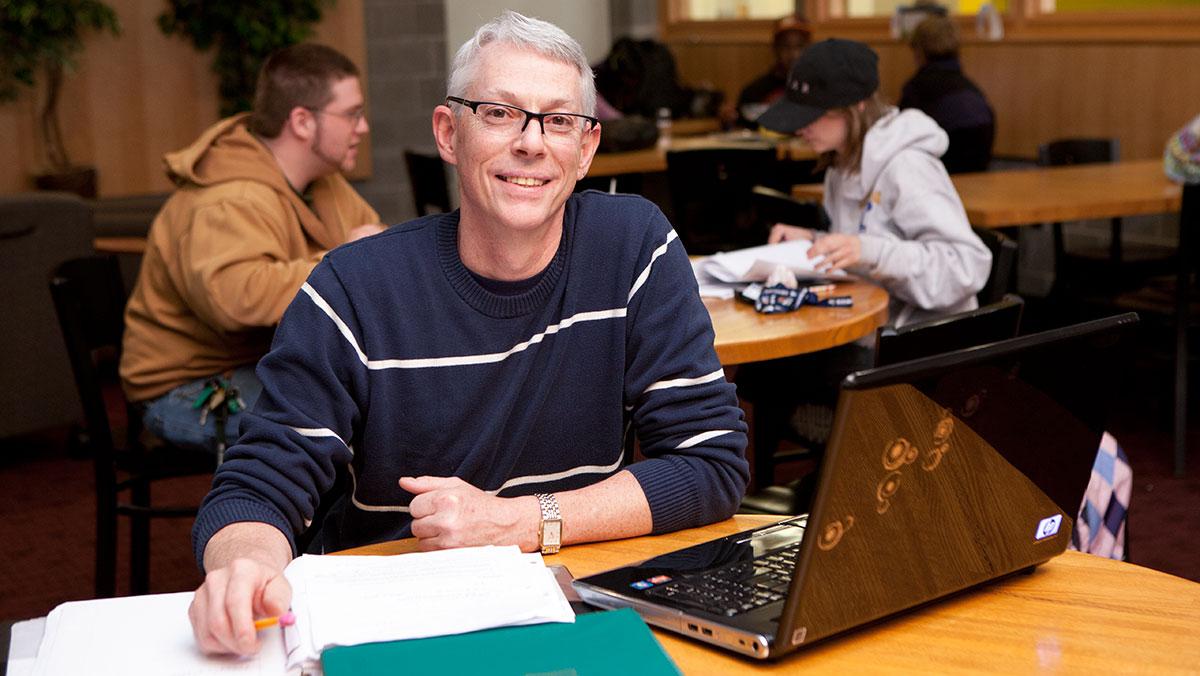 Courtesy of Steve Whiting
After facing a lifetime of obstacles preventing him from focusing on his education, junior Steve Whiting is now pursuing a degree in English teaching at Ithaca College.
By Daniel Hart — Staff Writer
Published: March 30, 2016

Steve Whiting goes about his day like most Ithaca College students: He studies in IC Square, walks to class through Textor Hall and says hello to his peers. However, at 57 years old, with trimmed gray hair and a briefcase, Whiting could easily be mistaken for a professor.

Whiting said he has enjoyed learning since elementary school but that growing up as one of four children in an abusive home with a single mother set a precedent for a lifetime of roadblocks. After graduating from high school in Weymouth, Massachusetts, Whiting went from job to job in cosmetology and retail, but achieving a college degree has always been the goal.

“My father was the one who started pushing the books on me,” he said. “After he left, he knew I had a penchant for reading.”

In 1988, Whiting studied for one semester at Quincy Junior College  — now Quincy College — in Quincy, Massachusetts. He said he felt his financial circumstances made it difficult for him to continue.

“I always put employment first because it paid the bills, and there was never really any time for me to study,” he said.

Whiting moved with his partner Luis to Elmira, New York, in 2003, where the two made a living remodeling houses. After seven years of solely focusing on his job, work he still enjoys but which his health issues no longer allow him to spend a significant amount of time on. Whiting felt ready to begin studying at Tompkins Cortland Community College, where he received a degree in creative writing and a Graduate of Note award, the latter of which he said surprised him.

“This just came out of the blue,” he said. “The teachers, your instructors, professors, the head of the department, all have to confirm on this in order to nominate you and give you the award. So this was like, OK, this is all right, this is another confidence booster. I earned it.”

While at TC3 Whiting wrote a play titled “Abby Normahll: A True Cindafella Story, Never a Princess but one Hell of a Queen!” for his dramatic literature class. The play, which takes place in a bar, is a dialogue between Whiting and a drag queen. As he explains and as can be seen from the dialogue, “Abby” represents a more confident, straightforward, in-your-face version of Whiting.

“You’re only an image of what I could have been. You are NOT me,” Whiting’s character says.

“Au contraire, mon frère,” replies Abby. “But I am you; a great part of you that cannot be ignored.”

Whiting and Luis broke up in summer 2015. With the emotional baggage and responsibility lifted, he said he could finally make education his top priority. He transferred to Ithaca College as an English teaching major.

Kelsey Beyer is a freshman in the Social and Cultural Foundations of Education class with Whiting. She said he has much to offer the class because he can share stories of his past that relate to the lessons, which Beyer said contributes to her and her peers’ education.

“We’ve been talking a lot about children who are at risk because their family life is a little hectic,” she said. “He talked about how his family life affected who he is today.”

Claire Gleitman, professor in the Department of English and Whiting’s professor for Dramatic Literature II, said she can see Whiting becoming a successful teacher. She said she appreciates the attitude he provides the class.

“He’s such a warm, personable, relaxed presence in a classroom,” she said.

Marissa Achee, a junior in Gleitman’s class with Whiting, said that despite the generational difference with his classmates, Whiting is easy to communicate with because of the effort he puts into connecting with his peers.

Whiting came out as gay when he was 14 years old. Whiting said his classmates at the time bullied him mercilessly. When he talks about wrongdoings done to him by others, he has a perspective that includes the suffering those people probably went through themselves.

“There were kids who I had no idea what was going on in their house either,” he said. “Turn it around, and you start looking at things from more of a positive perspective rather than feeling sorry for myself.”

Studying at the college fulfills a lifelong goal for Whiting, but he said he knows that in no way is it the end of his education. He said he loves to write and is confident he would be good at teaching, but he is not sure if teaching English is his calling.

Whiting said he feels lucky to study at the college, and he strives to not take it for granted. He advises his peers to have an open mind to where their education may take them.

“Here I am,” he said. “I’m accomplishing it. What I do with it after — I honestly am leaving that up to what the future brings.”

This article has been modified to correct factual errors.